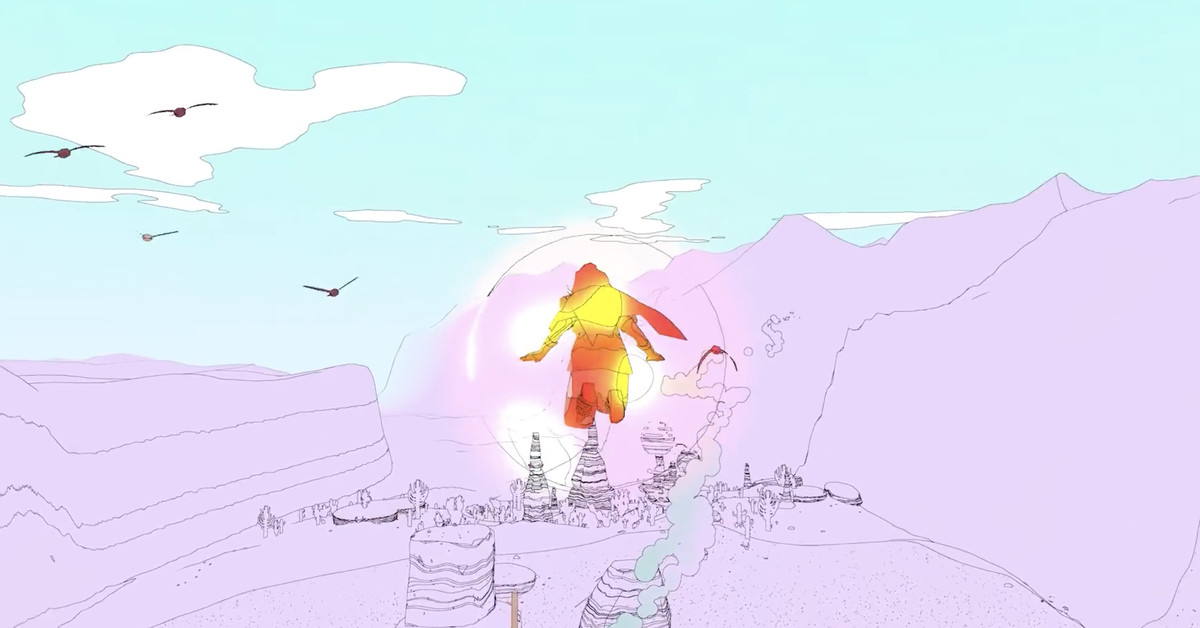 Link’s jump is heavy. And when the hero hops off the side of a cliff, he’s got only a simple cloth glider to catch his fall. Gravity makes the gliding in The Legend of Zelda: Breath of the Wild feel vulnerable, but the design still captures the tranquility of floating through the air. The balance between peace and unease makes Link’s travel feel real and important.

In Sable, the new third-person adventure game by Shedworks, that sort of climbing and gliding is an even more essential part of the gameplay. If I jump off one of Sable’s rocky desert cliffs as the game’s titular hero, I’m embraced by a warm, orangish red bubble that feels safer than Breath of the Wild, but evokes the same feeling of a peaceful descent. Unsurprisingly, Breath of the Wild is a major influence for the team at Shedworks.

In it, players control Sable, a girl who dons a red cloak and horned mask. When we find her in the demo (which is what I played for this article), she’s on the cusp of a coming-of-age event that requires her to venture into a temple to retrieve a stone. This tool, as it turns out, gives her the power to glide. Once retrieved, Sable heads off into the vast desert world where she climbs and glides to get from place to place.

“Breath of the Wild was definitely a big inspiration,” Gregorios Kythreotis, creative director at Shedworks told Polygon via email. “There’s so much clever design work in that game, especially if you’re making an open world game, it’s hard not to learn everything you can from it.”

From the few hours I spent playing the demo, I was astounded by how great it felt to traverse the environment. The climbing is short and punctuated. I didn’t spend a ton of time scaling a cliff face only to feel the disappointment of sliding back down (something I struggled with in Breath of the Wild). Kythreotis said that the Shedworks team didn’t want Sable to feel “superhuman” while climbing. On the contrary, the developers intended her to feel like someone who is new to exploration.

In contrast, gliding feels magical. When players jump off a cliff, Sable’s bubble carries her weight. She’s new to it — she puts her hands to her sides to help balance her, but the orb carries her weight generously. With gliding in Sable, you don’t fall down all that quickly. It’s more floaty, and laid back for the player. I could navigate tricky jumps without needing to be all that precise.

Gliding serves a unique purpose in both Breath of the Wild and in Sable, but in the latter, navigating the world in that way is tied to the story of the game. Getting to glide is a rite of passage, and it’s something precious — people can’t glide forever, we learn. Because of how special it is, the developers “wanted it to feel a little bit more ethereal and otherworldly,” Kythreotis said.

And whereas gliding feels kind of like an epic moment in Breath of the Wild, sending us off on a grand adventure, in Sable, it’s something more intimate. A source of comfort as our protagonist goes out into the world for the first time. When inside the glowing orb, the soundscape changes, and if you listen closely, you can hear the sound of a faint heartbeat. It offers the comfort of a mother’s womb, no matter how far from home you are.