I move fast and swing my blade even faster when I’m playing ScourgeBringer. What makes the game stand out among so many other similar titles is that, despite the speed and accuracy of my movements, the game is easy to pick up. This is what you go for when you want to feel like a badass quickly.

I play as a ninja named Kyhra, a pixelated character best identified among a sea of baddies by her poofy white hair. I’m dropped into a small dungeon, with each room connected to another via locked doors. I need to slash and destroy all my enemies to open the path forward. The key is violence, and luckily enough I am carrying a lot of keys.

The second I enter a room my feet leave the floor, and I won’t land again until everything is dead. I start my assault with a mid-air dash toward an enemy. Khyra remains static as I slice through them with my sword, jamming the attack button as fast as my thumb will move. She stays perfectly elevated, floating in mid-air, the movement of her sword seemingly keeping her afloat.

I dash to another target and offer them the same fate. I’m off to the next room in 20 seconds, and soon I meet my first mini-boss. These beasts hold the key to unlocking each dungeon’s final boss, and teach lessons I’ll need to face tougher foes during battle.

The mini-boss of the first dungeon is a floating eye encased in stone. I start the battle in my usual manner, dashing toward the mini-boss and slicing it to bits. After only a few strikes, the stone eye flashes an exclamation point above its head, signaling a massive attack. I switch to my slower Slam attack and stun the eye to prevent the attack from taking place at all.

It recovers and teleports away to charge up its ability once again. After I chase the boss around the room, I repeat my strategy of Slamming the eye each time it readies an attack, until I finally kill it and unlock the boss chamber somewhere in the dungeon.

I notice exclamation marks appear above the heads of my usual foes as I make my way to the real boss. Instead of just eating their damage or dashing away, I use my Slam attack to stun them, just like I did with the stone eye. I’ve altered my strategy; I’m not just button mashing anymore. I have one more tool in my repertoire now.

The first dungeon’s boss is a stone golem, with floating hands and a volley of energy projectiles to take me down. Unlike the mini-boss, I can’t stun each of the golem’s attacks. I need to use everything I’ve learned to kill it. I slice, I dash to a nearby wall for cover, I dash between the projectiles and, when I see an exclamation point, I stun the boss for massive damage.

It’s a race to lower each other’s health, but the boss ultimately wins and I’m sent back to the hub world. I gather my thoughts, spend some of the rare currency I picked up from the mini-boss to enhance my abilities, and ready myself for the next run.

Now I can dash into the ground for a slam attack, and my starting pistol is more powerful. And it was at that moment where I remembered I even had a gun, which fires bullets at distant targets, and is great for point-blank blasting bosses for extra damage. The sword was so much fun I never bothered to look for options in my first run.

With my newfound abilities, and knowledge of a mechanic I’d previously forgotten, I re-enter the dungeon. I use my gun to kill the stone eye even faster, and as I kill enemies in the following room, I recharge my gun’s bullets. I make quick work of the stone golem, and dash through a portal to another dungeon. I’m doing better this time, but it’s not just my new abilities. My fingers seem to have found the rhythm of the game, and have a life of their own. I’m in a state of flow, and I like it. 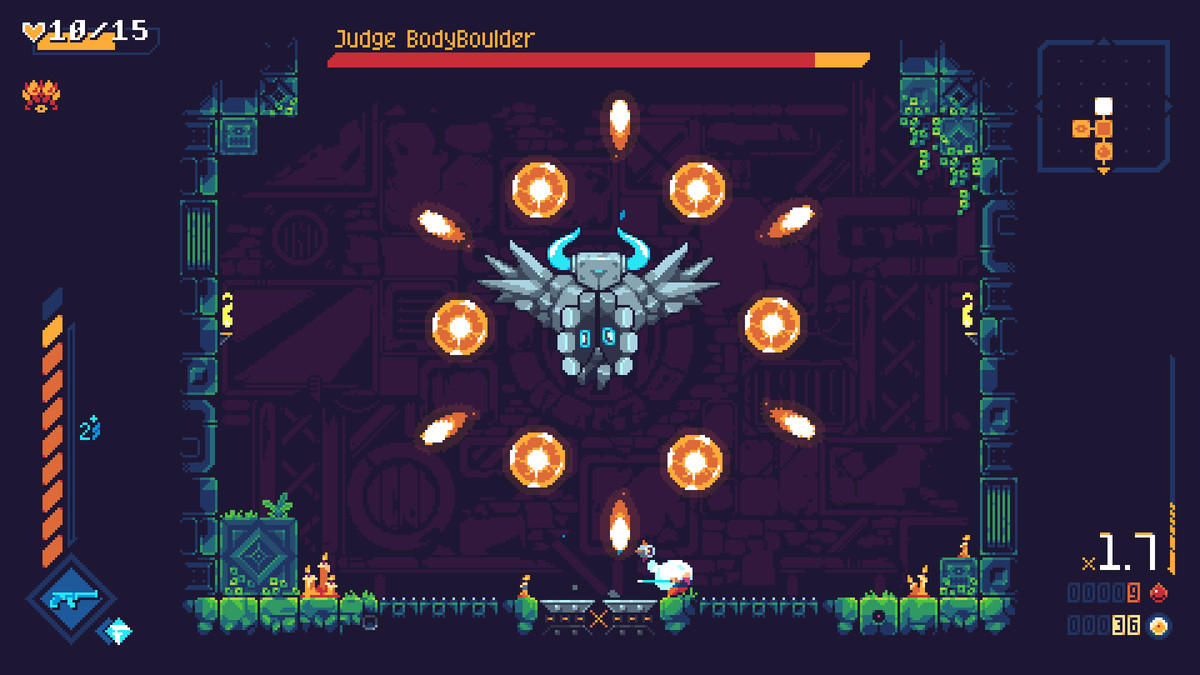 In my two hours with ScourgeBringer, it never asked too much of me, but I still feel comfortable with the controls, like I’ve played it for years. ScourgeBringer handed me a set of tools at the start of the game and forced me to learn them as best I could. I started as a clunky fighter, forgetting aspects of my toolkit, but I was soon zipping around the dungeon in a way that made it seem as if I had been playing much longer. The game knows how to teach competency in efficient ways, while introducing new ideas and abilities with each run.

I move based on instinct and, when something doesn’t work, I re-evaluate not just how I approach not only that single room, but the entire game. The game’s systems are tight enough that minor adjustments to my play style pay huge dividends. It’s a rewarding feeling that comes with much less effort than I was expecting. ScourgeBringer is one of those rare games that takes you from beginner to competent in an incredibly short amount of time, rewarding you consistently throughout your runs. It’s a crash course in being a badass, and even failure can be fun. I’m always collecting strategies and data, even when I’m dying.

It only took two hours for me to go from struggling on the first boss to completing the third and final dungeon. But I don’t feel cheated by how short this early access version of the game is; I’m more impressed by how quickly the game taught me to conquer it. No matter how fancy and cool ScourgeBringer looks in action, getting to that level of mastery is much easier than you may think.

ScourgeBringer never failed to make me look and feel cool, and I can’t wait for the next patch to send me flying again.

ScourgeBringer is currently available on Steam for $15 and on Xbox Game Pass.