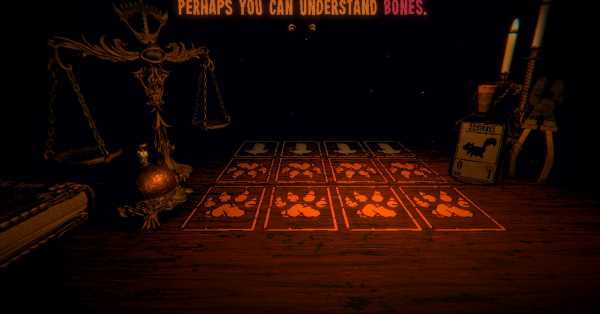 Reviewing Inscryption is tricky. I want to gush about the twists that happen mid to late game, but I know that doing so would ruin the pleasure of its story. Unraveling the mystery of Inscryption, a new horror card game available on Windows PC, is as essential to the experience as the card game at its core. So if you haven’t heard of this game at all, let me be the first person to tell you: Avoid spoilers.

Inscryption is mainly a deck-building roguelike game, with some escape room puzzle elements and a heavy dose of atmospheric horror. There are some interesting meta elements as well, the kind that haunt the other games from developer Daniel Mullins Games, like Pony Island.

The first time you boot up Inscryption, you’ll find the “New Game” option grayed out; you can only choose “Continue.” This is a small hint about the larger mystery running through (and outside) the game, foreshadowing how its answers will be revealed.

In Inscryption’s first act, you face off against The Game Master, a shadowy figure who begins by telling you how you got to the cabin: by winning a series of card games, of course. Your deck is made up of animals such as the humble squirrel (which you sacrifice to summon more powerful cards), as well as debuffing skunks, defensive river turtles, powerful wolves, and eventually a coterie of stranger specimens, like the ouroboros and the mole man.

For every attack that makes it past this furry line of defense, and for every point you land on your opponent, a golden tooth is added to the scales — literal scales that stand on the wooden table, underscoring the game’s rustic, body-horror aesthetic. Nobody has a pool of health points in this system; if you each take one point of damage, you’ve equaled out. I sometimes found myself backed into a corner, just trying to land enough damage to keep the scales from tipping over, to give myself time to draw better cards. Remarkably, this usually worked; the action on the board changes so quickly that stalling proved to be a pretty strong tactic.

As you walk the parchment map that The Game Master has laid out for you, you’ll have options to card-battle foes, fill your backpack with helpful one-use items, or permanently sacrifice a card to transfer its special buff sigil to another animal. These events often underscore Inscryption’s creepy flavor. For instance, the Mycologist can stitch together two identical animals to make a single more powerful being. The resulting card is roughly hewn and smeared with blood, but always worth the gore.

Inscryption is packed with secrets and puzzles — so many that you’re unlikely to find them all on your first playthrough. Throughout my livestream, several people who had already beaten the game were excited when I found something they hadn’t, like a jar of ooze or a glitched card with a string of binary code where its name should be. Some are randomized events. Others are just easy to miss.

Some cards have secret powers that are revealed only when you play them — in some cases, when you play them a lot. I got my hands on a legendary card early on, but because of its paltry 1 attack value and 1 hit point, I didn’t use it until I was deep in the game. Only when I was backed into a corner did I finally play this seemingly useless card and discover its secret power. By then, it was too late to incorporate the card in my overall strategy, but I’ve spoken to other players who relied on it heavily.

Like so many good roguelikes, Inscryption rewards you for just trying stuff out. Don’t know what a sigil will do? Play it. What’s in this egg card? Let it hatch on the field. What’s that jar of goo for? You have to use it to find out. Things might go horribly wrong, but you’ll have learned a lot about Inscryption’s interlocking systems. And as an additional incentive, at the end of every run, you’ll be given a chance to craft a new, likely very powerful card to boost your next attempt.

Between bouts with enemies and mutilating your cards, you can stand up, leave the table, and inspect The Game Master’s sparsely decorated cabin. Some of the furniture and trappings will benefit you immediately upon clicking them, but others take a little effort and investigation to discover their purpose. While I often found myself neglecting the escape room puzzles for just one more round of playing the card game, I recommend being more proactive than I was — most of the rewards in the cabin are powerful items for use in the card game, but some are necessary to progress the story. Other trinkets tie into the overarching story so subtly that their purpose won’t become clear until later acts of the game. In some cases, you won’t know which until it’s too late, so do your best to look around and solve everything.

I named all my custom cards after Disney Princesses, to continue the woodland-creature-helpers theme.
Image: Daniel Mullins Games/Devolver Digital via Polygon

The two main questions I’ve been asked about this game are (1) will I like it if I don’t like deck-building games, and (2) how scary is it? It is overwhelmingly a card game, and more than that, an ode to card games. If you can’t stand the genre, I don’t think Inscryption will change your mind. But it does a good job easing the player into strategies and teaching them the best ways to play, so if you’re new to card games, this is an instructive and spooky place to start.

As for the horror question: I didn’t encounter any jump scares in my playthrough, just grim imagery and spooky atmosphere. The worst bits are moments of body horror, which, while not shown on screen exactly, are quite visceral. Early on, you acquire a pair of pliers that you can use to tip the literal scale in your favor — by ripping out one of your own teeth and placing it on your opponent’s side. This happens from a first-person perspective, and the accompanying audio is, well … pretty intense. The good news is that these moments are pretty easy to spot before they happen, so they’re unlikely to catch you off guard. That said, if first-person self-violence sounds like too much, approach this game with discretion.

Inscyrption’s deft handling of roguelike and strategy elements means that once you’ve hacked out a reliable approach, you can make progress very quickly. This is good because, as I’ve hinted at, the cabin is only the first portion of the game. To say more would enter into spoiler territory. But despite all the secrecy, there is much more to Inscryption than the slow reveal of its mystery.

Inscryption is a great game, spoiled or not. That’s what will help it stay relevant not just for a moment, but for years to come.

Inscryption is now available on Windows PC. The game was reviewed using a copy purchased by the author. Vox Media has affiliate partnerships. These do not influence editorial content, though Vox Media may earn commissions for products purchased via affiliate links. You can find additional information about Polygon’s ethics policy here.