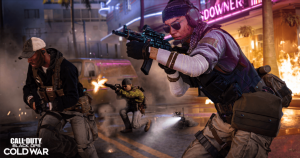 We know what to expect nowadays with Call of Duty.

A blockbuster story campaign rife with explosions and set pieces, a stellar multiplayer feature with tons of replayability and a zombie mode that’s often tough-as-nails.

And in that sense there’s nothing surprising to this year’s effort from developer Treyarch, Black Ops: Cold War.

This game is exactly that.

For the dad gamers out there who only play a handful of titles a year, the single-player campaign is an ideal Christmas pressie and will keep them entertained for a few hours like a Vin Diesel popcorn movie.

It’s about as subtle as a brick and lacks the nuance of last year’s far better story-driven Modern Warfare campaign.

But the return to some classic characters like Mason and Woods from 2010’s original Black Ops game in a retro 80s-style setting is welcome.

And the graphics are crazy good as this year’s title stretches the ageing PS4 and Xbox One consoles to their absolute limits while giving PS5 and Xbox Series X players something dazzling to show off.

The real replayability comes, as always, in Call of Duty’s multiplayer section.

And here we have a classic-feeling, stripped down online firefight suite as addictive as any CoD before it.

The level maps are well designed, giving lots of choke points for brutal close quarters gun battles as well as cubby holes for those players keen on camping and picking off their rivals with a choice one-shot sniper rifle.

It has a perfect but well-rounded set of guns that play distinctly from one another and feels amazing to shoot in the controller.

And the speed of multiplayer is blisteringly fast, with rival gamers all given a chance to shine on any given mode despite differences in play style and ability.

The now annual zombies mode is back too and great fun to play, albeit blinking hard to master.

There’s nothing quite like joining a strike team with three other gamers, blasting limbs off zombie Nazis while working your way through an abandoned graffiti-clad Polish military compound.

It’s brash, bonkers and gets increasingly impossible as hoards of the undead run at your gun-toting hero, trying to take a bite.

Overall, there have been better Call of Duty games in the past, particularly around the single-player campaign.

But Black Ops Cold war gets both the multiplayer mode and zombies just right and those are the ones that really count most for fans.