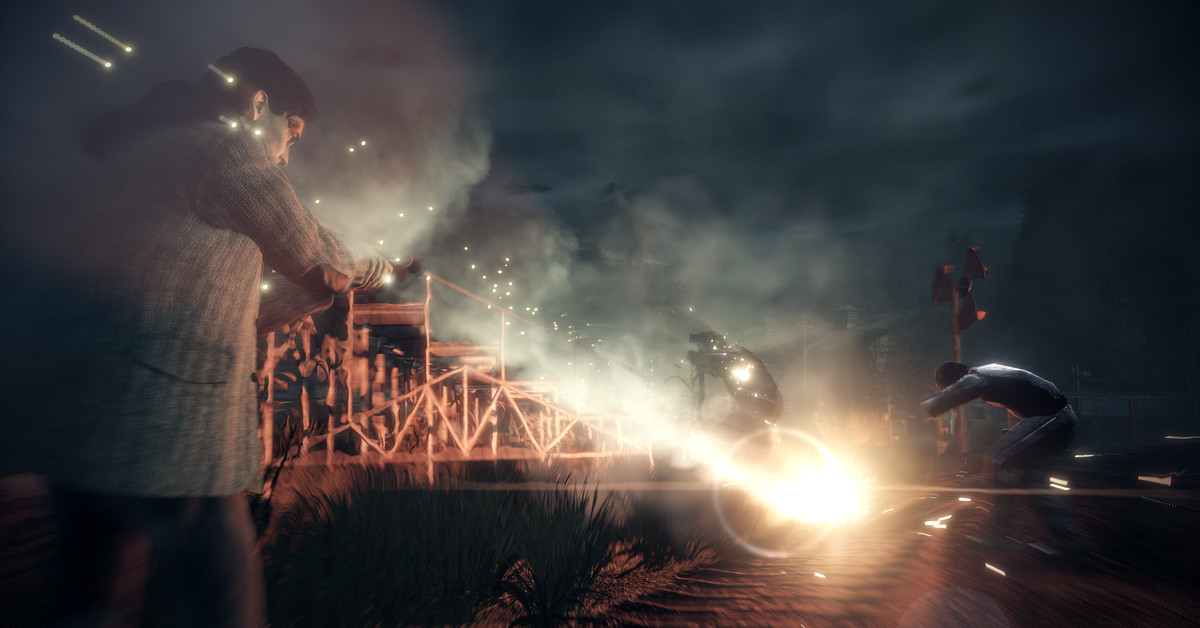 Alan Wake is a frustrating masterpiece. It’s rife with charm, and overflowing with a mysterious atmosphere, and both are on display in Alan Wake: Remastered more than ever before. However, its issues are still as glaring as they were 11 years ago, and this remaster does nothing to mitigate them.

Let’s get this out of the way up front: The actual act of playing Alan Wake was already boring in 2010. By today’s standards, it’s a legitimate slog. A good 40% of certain levels consist of just jogging through the woods or down a road, and Alan can only run for about five seconds without slowing down and huffing for air — a relatable trait, from one writer to another, but not the kind of thing that makes for fun gameplay.

The light-based combat, where Alan has to lower each enemy’s shield of Darkness by shining a flashlight at them and then blowing them away with a variety of guns, is neat the first handful of times. But Alan Wake pads each level with dozens upon dozens of enemies, each requiring the same one-two-punch tactic. In the modern era, when so many games are confident enough to make combat fleeting in the service of story and tone, Alan Wake feels ancient.

Other pain points instantly flooded back when I started playing, like the way enemies often spawn behind you with no noise or signal to warn you. There’s also the way the game’s charming narration sometimes disappears for minutes at a time, or gets interrupted in favor of large-scale battles with the Darkness baddies (called The Taken). Memories of fending off armies of evil birds while standing on a gondola or trying not to get crushed by an evil train all hit me at once.

The Remaster doesn’t do Alan Wake many favors visually, either. Character faces don’t emote well at all and cutscenes tend to stutter in certain sections. The forests and surrounding backgrounds do look gorgeous, and are better at higher resolutions, but it highlights the rest of Alan Wake’s ugliness by comparison. In other words, there is no mistaking that this is an Xbox 360 game at its foundation.

The primary benefit of playing the game on a PlayStation 5 — which still feels weird, considering Alan Wake was originally an Xbox exclusive — seems to be that it’s easily accessible and has shorter load times. The DualSense controller’s adaptive triggers also make aiming my weapons without boosting my flashlight much easier than it was originally — the trigger has two stopping points on PS5, with a slight hold aiming the gun and a tight hold focusing your light.

Exhaustion was the theme of my Alan Wake: Remastered play sessions. I’m exhausted getting to the narrative bits I love, the game is exhausted by its 11-year age, and, hell, even Alan Wake himself is exhausted by a simple jog. But every long run or burst of combat inevitably leads me back to why I originally played Alan Wake in 2010. It rewards my patience and hard work with its atmosphere, personality, and charm.

Alan Wake knows exactly what kind of game it is. It always has, and it’s that confidence that keeps it positive in the minds of so many. Alan Wake flaunts its influences — primarily David Lynch’s Twin Peaks and the works of Stephen King — so blatantly that Alan might as well be wearing a Carrie t-shirt and leaving recordings for his secretary, Diane.

Alan Wake’s all characters feel like they exist inside the world of Twin Peaks
Image: Remedy Entertainment/Epic Games

At one point, a Taken cleaves a hole in a door, with Alan just behind the blade, in a clear homage to The Shining. If that wasn’t on-the-nose enough, Alan then comments that the man with the axe just tried to break the door down like Jack Nicholson in The Shining. The in-game Oh Deer Diner might as well just be the Double R Diner from Twin Peaks. Alan recites a Stephen King quote to start the game.

Alan Wake is a love letter to people who love the macabre, the creepy, the mildly horrific. It’s for book and TV nerds who want to cuddle up with a checkered blanket, turn off the lights, and draw open the curtains. Its in-game TV show, Night Springs, is Remedy Entertainment’s beautiful reimagining of The Twilight Zone. Lastly, Alan’s often hokey, over-the-top narration feels intentional — like he’s reading a manuscript for his best-selling new novel (which he is).

When you strip away all the frustrations with playing Alan Wake, it oozes with atmosphere. The way enemies slink out from behind trees is spine-tingling, even after I’ve seen it 20 times. The way the wind blows through the forest when you’re alone, even when nothing scary is happening, is reminiscent of reading a horror novel in your bed at night, when everyone else is sound asleep.

It’s the grim veneer that not only saves Alan Wake, but like his flashlight, burns through the darkness that is its cloying gameplay. Alan Wake’s sense of place, its themes, the mood it creates, makes it a classic, and nothing — not even time — can overshadow that.

Alan Wake: Remastered will be released on Oct. 5 for PlayStation 4, PlayStation 5, Windows PC, and Xbox One, and Xbox Series X. The game was reviewed on PlayStation 5 using a pre-release download code provided by Remedy Entertainment. Vox Media has affiliate partnerships. These do not influence editorial content, though Vox Media may earn commissions for products purchased via affiliate links. You can find additional information about Polygon’s ethics policy here.