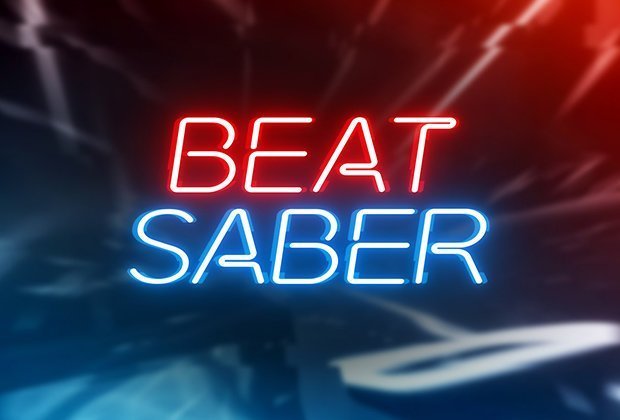 Beat Saber is the quintessential modern rhythm game, beautifully realised in Virtual Reality. I’ve spent a decade playing Guitar Hero and Rockband, but nothing has ever come close to the immersion and enjoyment that Beat Saber captures.

Let’s take a step back for a moment and examine just what makes it a system-selling sensation.

Beat Saber replaces the classic notes of a music track with a steady stream of floating cubes that fly towards your screen. You need to cut them, usually in a specific direction indicated by an arrow, to score points. To facilitate this, your VR controllers become red and blue neon sabers, which you must swing at the corresponding coloured boxes.

Though there’s no official Star Wars licensing, you can’t help but feel like a Jedi Knight brandishing two lightsabers. Even if you don’t care for Star Wars, the flurries of sparks and light effects as you carve through each cube is sure to impress and entice you.

You see, Beat Saber will have you showing the same disdain for those boxes as your average disgruntled courier. No really, you have to put some real venom into your swings to score the most points, as you’re graded on how far through the box you swing, as well as the angle of your slice.

There is a campaign mode, though it isn’t the main attraction of Beat Saber. It really just comes down to a sequence of levels that get progressively harder, each one unlocking new levels on your path to completion.

It does throw some interesting curveballs at you that wouldn’t be found in your average rhythm game, however. Some missions require you to move your hands a minimum distance, which will have you flailing madly throughout.

Others will ask you to poorly cut or entirely miss a certain number of blocks or limit your maximum combo string; these are a delicate balance that keep you on a saber’s edge between victory and failure. I don’t know about you, but I certainly don’t remember the Guitar Hero level where you were forced to stay within an inch of failing Free Bird.

The real beauty of Beat Saber is its near-universal accessibility. If you’re old enough to fit a VR headset on, and able enough to swing your arms around freely, you can play Beat Saber. It does a good job of introducing the concept to beginners, while maintaining a towering skill ceiling.

The lower difficulties ease you in and the different game modes and modifiers provide you with the tools to improve. You can reduce the speed and practice tricky sections or disable elements that are giving you trouble.

One mode removes the directional arrows, so your only objective is to hit the right colors with the corresponding saber, while another completely does away with one controller and has you play one-handed.

There’s also a party mode that lets you save multiple scores locally, but frankly the entire game is excessively fun in groups, so there’s no need to limit yourself to just that mode.

Once you’ve built up to it, Expert difficulty will really test your coordination, with tracks often requiring you to move each hand in asynchronous patterns. Drumming experience definitely helps here, though a general understanding of rhythm wouldn’t go amiss.

Some songs are so dynamic that you feel less like a Jedi drummer and more like an Aircraft Marshaller, frantically guiding a fleet of planes with your glowing batons.

You probably won’t notice it in the moment due to the meaty bass and flashy visuals replacing your blood with pure adrenalin, but Beat Saber is also a deceptively good workout.

I woke up the day after purchasing it with surprisingly sore arms, while one infamously difficult campaign level left me absolutely drenched. Such was the marathon session it took to complete Level 29’s “Rum n’ Bass”, which probably erased something valuable and profound from my brain as it burned itself into my memory.

Seriously though, make sure you have a working fan or AC if you’re considering playing this on a hot day.

Beat Saber is a breeding ground for interesting mods and impressive custom songs from every genre imaginable. Take the custom track for PSY’s “Gangnam Style”, for example.

At first glance, the note chart is an unintelligible mess, until you realise it’s literally the dance choreography from the music video. I’m not kidding, it has you windmill one saber in the air as you swing downwards repeatedly with the other hand, before crossing your arms and bouncing them by your waist.

It’s a surprising level of innovation, and with the Level Editor now included in the full release, it’ll be easier than ever to find, make, and download custom songs.

As it’s only just been released to the public, we may have to wait before the songlist really expands, but there’s already a wide range of custom songs available through separate mods that are still supported in Beat Saber v1.0.0.

These range from EDM hits by Skrillex and Avicii, to the alt-metal offerings of Breaking Benjamin and Linkin Park, to outright memes such as “We Are Number One” and “Megalovania”.

Don’t be fooled, though, these tracks are often viciously difficult, which is the one big flaw of the old custom song system. Most songs were only designed for the Expert difficulty, and though you can play with the No Fail option on, you won’t get the same rewarding feeling from hitting notes if you’re missing the majority of them.

Though this does incentivise you to improve so that you can play your favourite songs at a reasonable level, there’s no shortcut for learning coordination, so hopefully we’ll see wider difficulty support with the future of the official Level Editor.

Just don’t go diving in expecting to make your favourite songs in minutes flat – the UI for the Level Editor isn’t user-friendly, and there’s no official tutorial for it yet.

Beat Saber is the perfect recipe for a rhythm game. Easy to pick up, difficult to put down, and a wealth of complexity to explore once it has you hooked.

Now that it’s left Early Access, it has a dearer price tag, but Beat Saber is a system-seller. It’s the main reason I bought a VR headset in the first place, and it was absolutely worth it.

Though the official song list could be longer, the addition of the official Level Editor means you’re also signing on for a tracklist as expansive as the community can support.

It’s frankly essential to anyone with a VR headset.