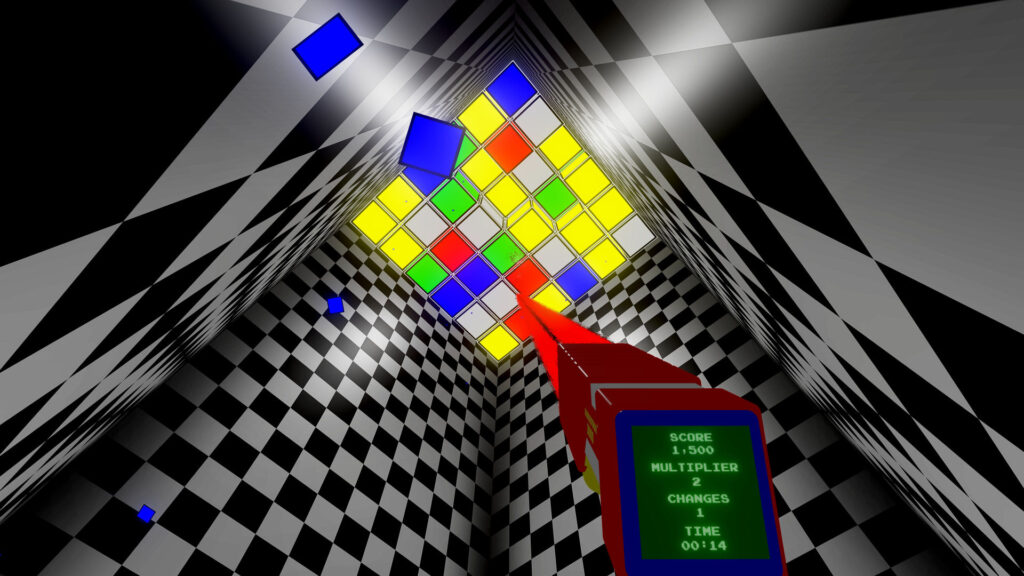 Smartphones are renown for their hyper-casual videogames and virtual reality (VR) has a few of its own. Originally released at the end of 2017 for PC VR headsets was Boxed In, a puzzle title where you have to match coloured blocks before getting crushed. British developer Red Chain Games has been improving the experience in the run up to a PlayStation VR launch later this month.

Boxed In puts you in a room with no walls, and depending on the gameplay mode the coloured blocks will come from different directions which you have to match up to remove. With the ability to change the colour of a cube, add a new cube, or push a cube when it’s close to you, in the more relaxed Solitaire mode the room is filled with static cubes which you have to clear.

For a proper challenge, there’s the Survival Mode where the blocks come from below, continually moving until they crush you. The difficulty of this mode can then be increased by upping the colour matches from three to four or five combinations. In total there are 36 variations to switch between. With the PlayStation VR edition, players have the option to use a DualShock 4 controller, PlayStation Move and PlayStation Aim depending on preference.

“We wanted to make a game that would appeal to everyone, especially newcomers to VR. We’ve been blown-away by the reaction of players experiencing the immersion of being inside the puzzle,” said Red Chain Games’ Lead Developer Richard M. Smith in a statement.

Reviewing the original PC VR version of Boxed In VRFocus said: “Boxed In is one of those pleasurable time-wasters like the videogames you play on your smartphone. What it lacks in amazing visuals, convoluted narrative or groundbreaking gameplay, it makes up for by having a plucky, no-nonsense attitude to VR gaming.”

Red Chain Games plans on launching Boxed In for PlayStation VR on 28th May 2021. For further updates keep reading VRFocus.