Here’s the problem: In a fight between a dope dressed in white plastic “armor” and a warrior-monk wielding a laser sword and mainlining the secret magic of the universe, the one with telekinesis always wins.

In a movie, watching Jedi slice through evil stormtroopers like a knife through warm butter is rad. In a game, that sounds … well, kind of boring after a while. If everybody goes down in one swing, where’s the challenge?

This is the problem that the developers of Star Wars Jedi: Fallen Order at Respawn Entertainment have been working on for years. How do you make combat between a superhero and a pedestrian interesting?

Well, after spending the better part of an hour playing Fallen Order as a Jedi fighting hordes of stormtroopers, it seems like they’ve got a good answer. And to anyone who’s played Sekiro: Shadows Die Twice, it’s a going to feel familiar.

It’s kind of funny, that familiarity, and the developers I spoke with seem to think so, too. The connection is impossible to ignore. It’s like independent scientists making the same discoveries simultaneously on opposite sides of the world. The creators of Sekiro and Fallen Order came the same conclusion: Sword-based combat is best with parrying. 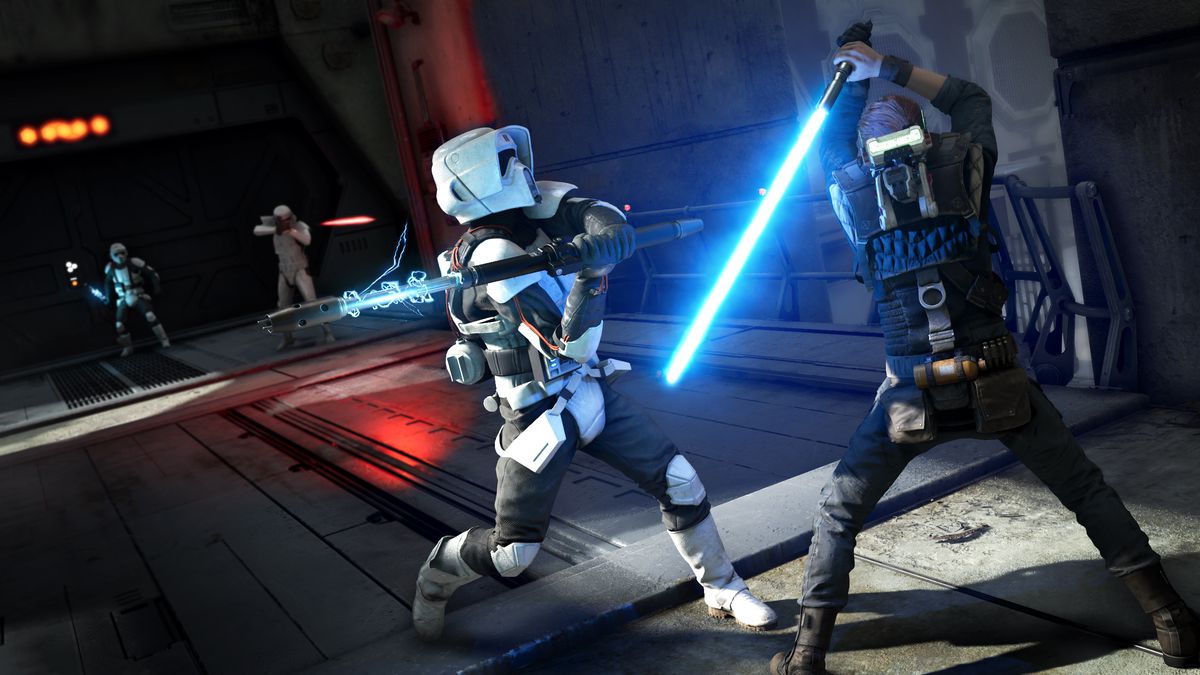 So when I take control of Cal Kestis on the Wookiee homeworld of Kashyyyk, and I see stormtroopers, my instincts kick in. Let my enemies come to me. Keep my guard down. And then raise it, just as someone’s about to hit me.

I do just that.

My parry staggers my opponent, knocks him off balance. He takes a step back, then another. But in less time than it takes to read this sentence, I’ve attacked. A baked-in animation takes over. I trip the stormtrooper. He falls to the ground. I plunge my lightsaber into his chest. He’s done. Now it’s time to deal with his two buddies down the hall.

One of them has a blaster, and he’s annoying me with chip shots every few seconds. I could just stand there and block every bolt with my lightsaber, as you do when you’re a Jedi. But then I realize that Fallen Order’s parrying mechanic works at range, too.

I lower my guard. I wait for the next shot. Just before the laser’s about to hit me, I block. The blaster bolt flies back over the same path took to get to me, strikes the stormtrooper, and he falls.

There’s another stormtrooper carrying what looks like a Darth Maul-tricked-out version of the Z6 riot control baton from The Force Awakens, which can block lightsaber attacks. I lock onto him with the press of an analog stick, and I wait for him to approach. He’s not the least bit interested. Instead, he gives me the “come at me” gesture with his hand. Now my blood’s boiling. “OK, asshole,” I think. “That’s about the last mistake you’ll ever make.” (I’m a swearing Jedi, I guess.)

I charge. I swing my lightsaber. He blocks. We do the dance again. And again. I can’t bait him into attacking, and I can’t just break his guard. We’re at a standstill. 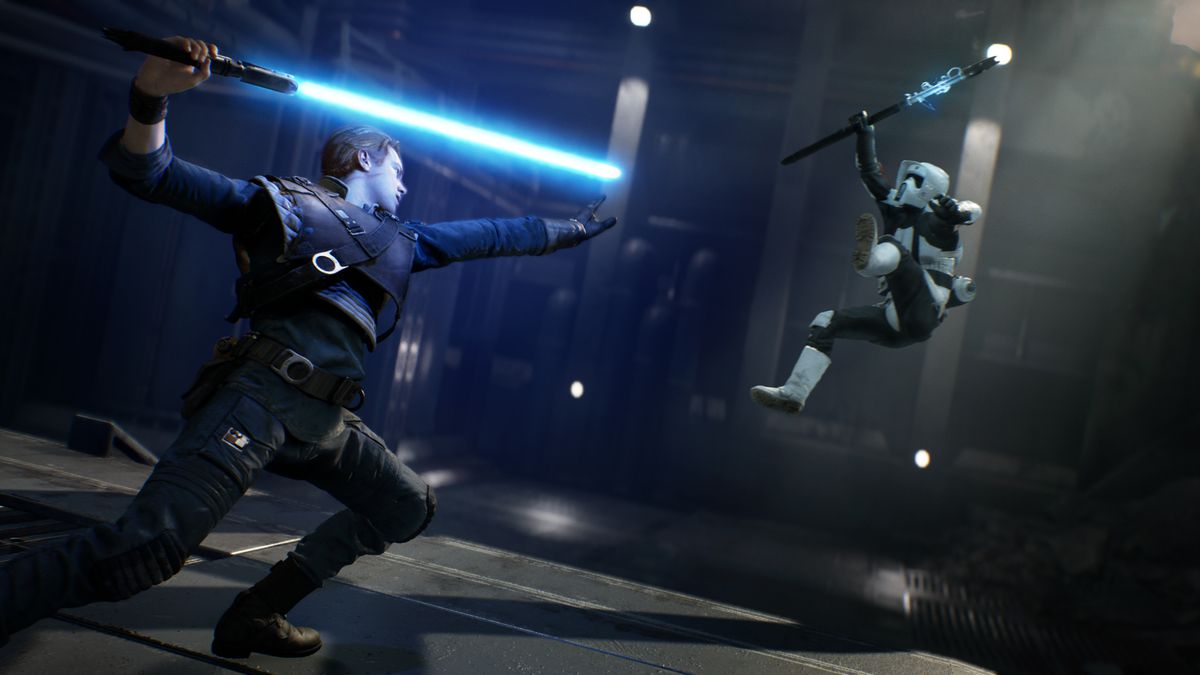 And then I remember that I have the Force. This isn’t just a sword-based game. I’m a freaking Jedi. Duh.

I press a couple of buttons, and I throw my lightsaber like a boomerang. It spins and sails past him. I feel like a dope for missing, until it reverses course maybe 10 yards behind him and sails back toward me. It slices through my enemy’s back, and he falls to the ground as my lightsaber lands back in my hand.

It’s at about this point when I think that this feels really good. It won’t be the last time.

This is how Fallen Order combat works. It’s not just me against one helpless dude. It’s about building scenarios where there are several baddies in my way, and I’ve got to carve a path through. Some of them are in the distance, sniping me with blasters. Some are closer and aggressive, attacking me at the same time. Others want me to come to them, which would be fine if I weren’t fighting off three or four of their friends simultaneously.

I have to look at the area, figure out where the danger is, and plan a series of attacks. It’s about making the best use of the space around me, and managing enemies. I have to dance with every opponent. I pull some toward me with the Force, so I can slice them in half with one hit. I throw my lightsaber at the guys in the distance, so I don’t have to worry about blasters. I push the toughest enemies out of my way, just so that I can stagger them for a second or two and get my bearings. I dodge just to survive when three of them are suddenly in my face. I figure out the differences between killing giant spiders and stormtroopers. I risk keeping my guard down, only to raise it at the last possible moment. I wrestle with the lock-on system, which (like Dark Souls or Bloodborne) sometimes pointed me at an enemy that I didn’t want to fight.

Treating every combat encounter like a living puzzle is a lot of fun, is what I’m saying. It also made my palms sweaty. 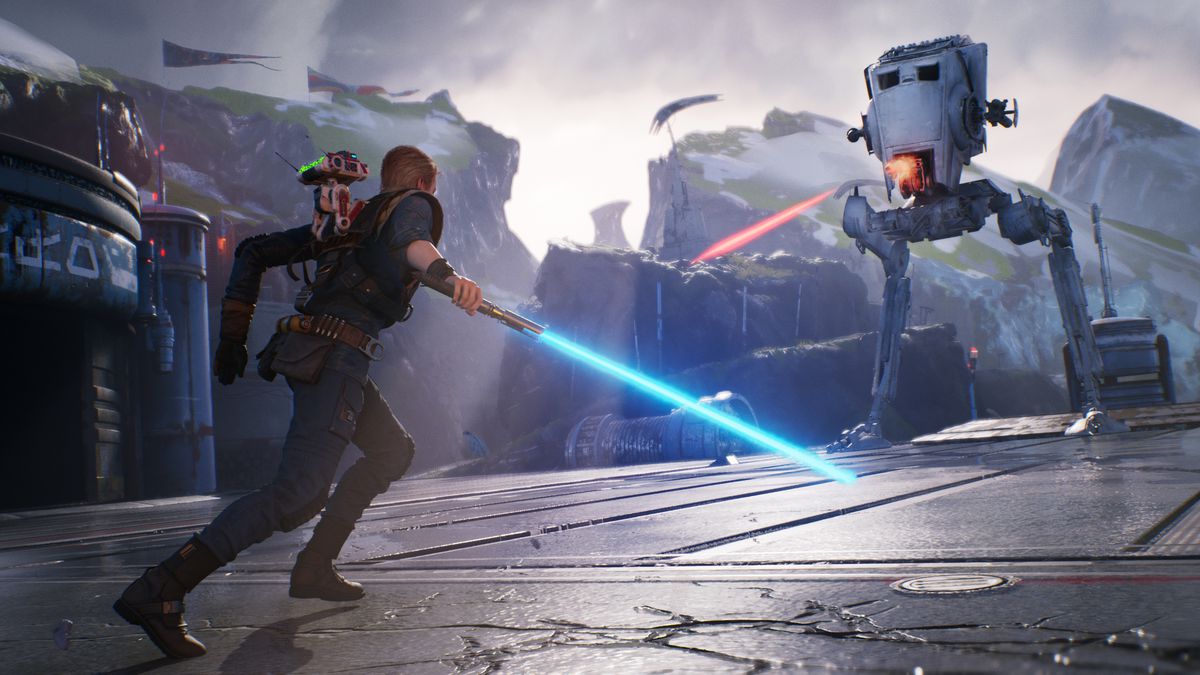 The E3 2019 gameplay debut footage didn’t do the combat justice. It looked, well, kind of generic. There were a few days between when I saw an extended demo and when I played Fallen Order, and that was the question on my mind: Is it going to feel good? Because it looked ordinary.

The answer, at least during E3 2019, about five months before the game’s Nov. 15 release, is a definitive yes. But I had to play it to realize it. I had to feel it to understand it. It does look kind of generic, but it doesn’t feel that way.

I should also point out that demos like this aren’t the same experience as playing the final game, so the jury’s still out. I saw a small slice of Fallen Order, rearranged to convey how its creators want the game to work. They’re showing a work in progress in its best light. What I played isn’t exactly what will ship. But if it’s indicative of that, then I’m optimistic.

The developers told me that the game is mostly done. They’re going to spend the next few months fine-tuning the details. What’s the final timing window for parrying? Should there be a Sekiro-like jumping kill mechanic, and if so how should it work? Is the dodge animation right? Is Fallen Order too difficult?

These things need work, I think. They’re the right questions for the developers to ask. But I also think that the core combat mechanics are a lot of fun. Respawn’s Fallen Order team figured out a way for a Jedi to fight stormtroopers that isn’t boring. It’s a FromSoftware-like dance. It’s already good. I’m glad they’ll be spending the next few months trying to make it better.