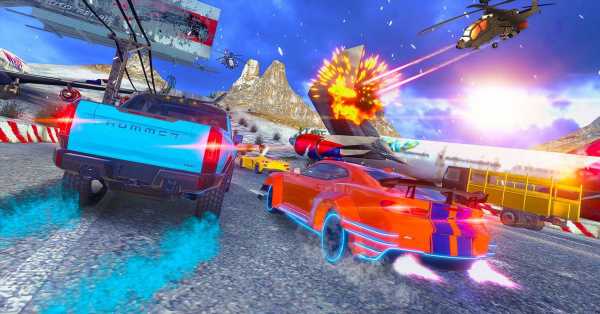 A cherry red Corvette Stingray cuts through a Los Angeles street race, when, with little warning and lots of noise, a hail of missiles pulverizes the highway, clouding the air with dust and fire. The vapor trail leads to a squadron of attack helicopters floating in front of the California sun. It’s an ambush. The Corvette swerves to evade its pursuers, but the road’s congested by a trio of 18-wheelers carrying humongous platinum tanks full of — what else — gasoline.

Click! A missile releases from a chopper, then speeds toward the closest semi. The driver of the Stingray stomps on the gas, twists open a can of nitrous, and — defying physics — sends the vehicle into the air, performing a barrel roll inches above the explosion and into safety.

Thank you for attending my dramatic recreation of my first 20 seconds of an early race in Cruis’n Blast, one of the more charming and messy games released on Nintendo Switch this year.

If you’ve ever visited a musky small-town bar or a Holiday Inn game room, you’ve probably come across the first entry in the Cruis’n franchise, 1994’s arcade classic Cruis’n USA. Affinity for the series dropped with each following entry, before plummeting into obscurity with 2001’s Cruis’n Velocity. Despite the closure of arcade publisher Midway and the death of nearly every arcade in America, the creators of Cruis’n never took their foot off the gas. Series creator Eugene Jarvis (Defender, Robotron: 2084) founded Raw Thrills, a bluntly named arcade game developer that’s been quietly producing about a game a year since 2004. It’s responsible for familiar stuff, like entries in the Big Buck Hunter Series, and some not-so-familiar stuff, like arcade adaptations of films like Cars and Alien: Covenant. And in 2017, alongside sequels and marketing tie-ins, the studio managed to produce the first Cruis’n game in over a decade, Cruis’n Blast.

OK, let’s pause for a moment because you should watch me win a race before we go any further. Here’s a quick video:

As you can see, Blast is nearly identical in structure to its predecessors. The goal is to be the first across the finish line at the end of a straight track that carves through increasingly comical settings. Alongside gas and break, Blast adds the ability to drift and boost à la Mario Kart. You can upgrade your car, buy nitrous, and crash enemies, but the only real challenge is staying on the road.

Now you can play Blast without shoveling tokens into a gaudy arcade cabinet, thanks to a beefy port for the Nintendo Switch. The good news is that the port’s cheaper than buying an arcade cabinet and includes some new cars, modes, and tracks. The bad news: It will cost you $39.99 for a racing game with only five locations and graphics that would have looked cutting-edge during the Clinton presidency. I completed the entire campaign and unlocked most of the vehicles during my flight from Los Angeles to Detroit with a layover in Dallas.

On one hand, that’s a short amount of time to see most of what any racing game has to offer. On the other hand, I experienced the single greatest day of air travel in the history of humankind. Reader, this video game rules.

If my intro sounded like a synopsis of a Fast and Furious set-piece, that’s because developer Raw Thrills has produced four Fast and Furious arcade games. They clearly learned from the experience. The first half of the game plays like an unofficial spinoff of the films, replete with nighttime street races in international cities and police chases in tropical islands.

And yet, these introductory courses are rather subdued compared to the back half of the game. After my Stingray escaped from LA, it drove into earthquakes, under UFOs, and away from dinosaurs. By the closing credits, I had been awarded the freedom to drive said UFOs and dinosaurs. So far, I’ve unlocked a number of cars, trucks, and motorcycles, along with a helicopter, a flying saucer, a triceratops, and a unicorn.

Does a helicopter look silly as it performs a nitrous back-flip while racing cars through an ice cavern overtaken by yetis the size of the Statue of Liberty? Yes! That’s the point! If this game had been produced by a small indie game maker as a loving ode to a dead series, I genuinely believe we’d be praising the borderline DIY visuals as bold, weird, and psychedelic. I think Raw Thrills, even with its pedigree, deserves a similar benefit of the doubt, that the game’s rough edges are in some ways an intentional choice. A vibe.

Cruis’n Blast borrows a lot from films like the Fast and Furious franchise. But as those films get higher budgets and more polished visual effects, their creators could learn from a game like Cruis’n Blast: Too much polish can conceal all the fun.

Cruis’n Blast was released Sept. 14 on Nintendo Switch. The game was reviewed on Switch using a retail download code provided by Raw Thrills. Vox Media has affiliate partnerships. These do not influence editorial content, though Vox Media may earn commissions for products purchased via affiliate links. You can find additional information about Polygon’s ethics policy here.