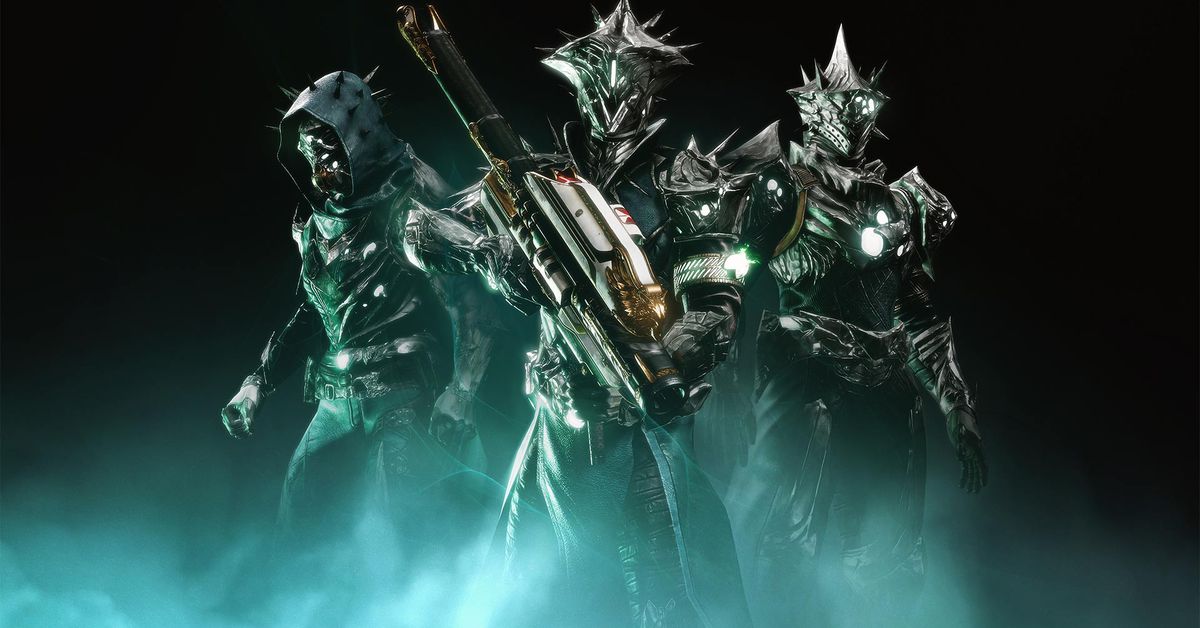 A little more than a week after the Destiny Showcase, we know a lot more about The Witch Queen expansion and Year 5 of Destiny 2 than we did before. And in talking to game director Joe Blackburn and general manager Justin Truman last week, we’ve gotten new information on weapon crafting and glaives, raids, Hive Guardians, and the subclass reworks. But to round out our series of interviews, it’s time to talk about the lifeblood of Destiny: weapons.

We spoke to the developer duo about if unique, Exotic-only weapons will stay Exotic forever, the limitations of Exotic Catalysts, and the return of Gjallarhorn.

Legendary trace rifles could be on the horizon

Destiny 2 has gotten a variety of unique Exotics over the past four years. But several of those fall into the same unique weapon type: trace rifles. Trace rifles are like auto rifles, but fire in a single, continuous beam and use the rarer Special ammo. Players started out with Coldheart at Destiny 2’s launch and have since picked up Prometheus Lens, Wavesplitter, Divinity, Ruinous Effigy, and soon, Ager’s Scepter. Despite having six weapons that all work similarly, there are no Legendary trace rifles in Destiny 2. But that could be changing.

“You can look back at our track record here,” said Blackburn. “And you can say things like ‘Hey, I remember when swords were just Exotic,’ right? ‘Hey, I remember when there was only one sidearm in the game.’ This is something that as we explore, we’re really excited about pushing some of those.”

Blackburn went on to mention that some Exotic-only weapons need to stay Exotic to stay unique. The Legend of Acrius and Tractor Cannon shotguns, which sit alongside one another as the only shotguns that use Heavy ammo, are unique. Being in the Heavy slot makes those weapons Exotic. But not every “unique” Exotic falls into that category.

“Dead Man’s Tale is pretty cool, right,” said Blackburn. “Coldheart is pretty cool. These are all stuff that we look at in the future and say, yeah, we’re as excited as the community is about a bunch of that.”

Truman expanded on this idea: “The question we ask ourselves a lot is, like, ‘Do we want this to be this really unique, personalized experience? Or do we want this to be a space that we can play in?’ So if we were to expand one of those [weapon types] we wouldn’t release one Legendary, we’d be like ‘Oh, this is an awesome space for us to release a whole slew.’ But I think some of them, that’s definitely like, no, it’s really cool to have this one, interesting exception to the rule.”

For Bungie, it seems to be a question of “What makes this weapon Exotic?” If it’s the slot or special archetype itself, maybe that type will always be limited to Exotics. But it seems that trace rifles — and even potentially lever-action scout rifles like Dead Man’s Tale — might get Legendary versions sooner rather than later.

Exotic Catalysts and the Orb-or-Power problem

Thorn, a beloved weapon that still doesn’t have a Catalyst
Bungie via Polygon

Early in Destiny 2’s life, Bungie added Exotic Catalysts to the game, a way for players to upgrade certain Exotics. But even better than new perks, Exotic Catalysts also cause Exotic weapon multi-kills to drop Orbs of Power, which players can use to charge their Super and activate other perks. This makes Exotic Catalysts very desirable in all levels of play, but makes it difficult to justify equipping an Exotic that Bungie hasn’t given a Catalyst yet.

“There’s some really different, interesting solutions to that problem space,” said Blackburn. “[…] While we’re not ready to talk about them right now, we’re well aware of things like ‘hey, Thorn can’t generate Orbs, or Anarchy — not that Anarchy needed another reason to be great — but a lot of people, for a while the echoing cry was ‘can you just give Anarchy a Catalyst? All it’d have to do is make it give Orbs.’ Like, listen. Anarchy is good enough without the Orbs, you can take the downside here. But yeah, that’s something we think about.”

While Blackburn doesn’t suggest a specific solution to the Thorn issue — or Anarchy, which has since been nerfed — it seems Bungie is working to find a way to make non-Catalyst Exotics viable.

Why Gjallarhorn, why now?

Players will need to plunder the famous Loot Cave to get Gjallarhorn
Image: Bungie

A major surprise from the Destiny Showcase was the Bungie 30th Anniversary event and the announced return of the Gjallarhorn rocket launcher. To close out our interview with Destiny 2’s two leads, we asked why Gjallarhorn is coming to Destiny 2 after such a long hiatus.

“One of the questions we asked ourselves, when we started looking at what would a 30th Anniversary Celebration look like is like, ‘what are those moments that we really want to call back to on this journey, the experience we’ve had with out players,’” said Truman. “And two that immediately jumped was that experience of the loot cave at the very beginning of Destiny 1, and the […] Exotic-defining moment when you understood what Gjallarhorn was.”

In the Bungie 30th Anniversary event, which starts on Dec. 7, players will dive into a new dungeon based around the loot cave from the original Destiny — a glitch that let players farm gear by, essentially, shooting into a cave. Players will delve inside the dungeon and emerge with Gjallarhorn, the series most iconic weapon, left behind in the original game.

As for what Gjallarhorn brings to the table, Blackburn sees it as the great equalizer: “Even if it’s not ‘Hyper S-tier, good at everything,’ Gjallarhorn is the opportunity for us to add back the thing that when you’re getting someone new into Destiny you’re like ‘OK, what we’re gonna do first is we’re gonna get you out of New Light, and we’re gonna run this dungeon, and get you Gjallarhorn.”

Blackburn compared Gjallarhorn to an easy-to-learn champion in League of Legends, Master Yi. Blackburn is essentially saying that Gjallarhorn is idiot-proof — much like Master Yi. You don’t need to hit crits, you don’t need to know how many Anarchy bolts to plop onto a boss; with Gjallarhorn, you point, you shoot, your reload, and you repeat until you run out of ammo or (more likely) the boss is dead.

“You can use [Gjallarhorn] in a bunch of situations and not be let down by it,” said Blackburn. It’s a way to make a new player, of any skill level, feel useful in 99% of content almost immediately. That’s the authentic Gjallarhorn experience, and it’s the one Bungie intends to deliver.