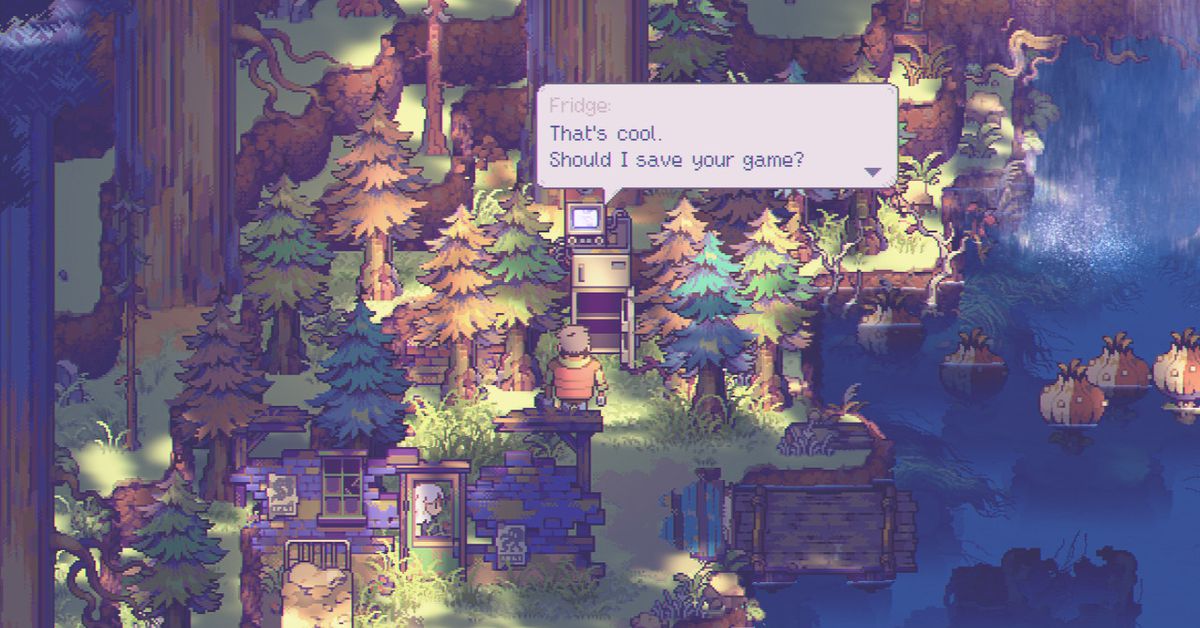 Eastward is not subtle about its influences: Chinese developer Pixpil has lovingly pulled inspiration from all sorts of media and combined it into a pixel art role-playing game that’s still, somehow, unquestionably itself. You’ll read a lot around the internet about The Legend of Zelda’s and EarthBound’s influence, and that’s all certainly there — after all, there is a character referred to as Mother, a playable in-game RPG called Earth Born, and a Zelda-esque pixel heart meter. Eastward’s world, spread across a variety of cities and biomes, also pays homage to the post-apocalyptic world of Studio Ghibli, the spirit of childhood adventure films like The Sandlot and The Goonies, and the ritualistic mystery of occult grimoires.

But more than anything else, Eastward is Eastward — a game where you play as a duo of connected characters. The game begins with John, the best miner in a post-apocalyptic underground town, digging up a white-haired child named Sam. Quiet John, who never speaks a word, takes in Sam, a naïve and strange little girl, as they quickly become inseparable. John cares for Sam, who is too young to do so herself despite her special powers, and they quickly become friends.

Published by Stardew Valley publisher Chucklefish, Eastward pushes John and Sam to the surface of its world, forced out from underground into a landscape that’s been largely devastated. Whereas everything underground was colored in shades of brown, these new surroundings are vibrant and often dilapidated. Yes, the world is much more dangerous up there, but it’s also warm and lively, colored in shades of green, blue, pink, and yellow. Likewise, places like Whitewhale Bay and New Dam City are both populated with quirky, welcoming residents — what’s left of them, at least — struggling to survive in their doomed cities. It’s from here that John and Sam realize they must head east via train to the end of the world, hopping from city to city in search of an answer to their problem: a mysterious miasma that’s been swallowing up towns whole.

It’s a treacherous journey, but John and Sam are equipped for survival. John, for his part, has a trusty frying pan he uses to wallop enemies — and also to cook elaborate meals made from ingredients found (and bought) throughout Eastward’s world. Sam has a supernatural ability that allows her to shoot energy bubbles that can stun enemies, useful in both fighting and solving the game’s environmental puzzles.

Eastward is a single-player game, so you’ll be playing each character simultaneously. For a large portion of the game, John and Sam travel one behind the other in sync; you switch them from the first position to the second by pulling the trigger on your controller. John and Sam can also be played independently from one another, and it’s here where Eastward innovates. Using each character’s abilities — like John’s bombs or frying pan and Sam’s stun — is essential in solving the puzzles in Eastward’s dungeons and exterior environments. Puzzles in Eastward aren’t mind-bending, but they are satisfying. Often, they require you to move with precision and clarity to successfully solve them — sometimes against a clock.

John and Sam’s abilities are also key in some of Eastward’s more challenging boss fights, in moments where slapping enemies with the frying pan (later, John will also acquire a gun, flamethrower, and cog weapon, alongside different bombs) is simply not enough. These boss fights are often simple in theory: dodging hits, stunning enemies, and taking a swing, for instance. But, like the puzzles, they require a precision that can be hard to master; the sheer simplicity is clever and deceiving.

I found some of these fights to be extra challenging due to the disappointing scarcity of resources hidden around Eastward’s spaces. Rusted ovens and old refrigerators — also being reclaimed by nature — are placed in cities and dungeons to encourage cooking, which fills up your heart meter. These were useful to me when I was in the city, flush with salt, Eastward’s currency, to purchase ingredients like meat, dairy, or vegetables. But those were nearly the only times I ever came across enough ingredients to actually make something, and I never had enough cash to stock up enough for longer trips.

That was a shame, because Eastward’s cooking mechanic became one of my biggest joys. Different ingredients can be combined in dozens of ways to create different meals: hamburgers, hot pot, cold noodles, grilled fish, fruit salad, and fried rice among them. There’s also a slot machine-esque mechanic that can add extra buffs to the meals. The cooking, too, is essential to John’s story: The dude loves to cook, and he’s very good at it. (It’s also, presumably, why he wields a frying pan.)

Eastward progresses onward for more than 30 hours — my total playtime for this review clocked in at 37. But as each new area opens up, the puzzles and subsequent mechanics are continuously iterated on. For instance, by the time you’ve gotten well-acquainted with navigating puzzles by controlling John and Sam independently, Eastward will introduce a timer. Or, perhaps you’re dodging a train during a boss encounter as it sweeps back and forth over the tracks. In the next stage of the fight, you’ll be dodging the train while monkeys onboard toss explosive bananas. In the third stage the tracks are on fire. Eastward continually introduces new, challenging, chaotic mechanics to contend with.

Running in the background of Eastward’s main narrative and gameplay is a playable in-game RPG called Earth Born, available on arcade machines found around cities. It’s referenced heavily throughout Eastward, the story acting as a mysterious parallel to that of John and Sam, whether you decide to actually play Earth Born or not. The dual narrative feels both natural and essential: Eastward itself is an homage to nostalgia in retro games, and the characters love Earth Born in the same way we might view EarthBound. There are plenty of opportunities to play through it, too, on those aforementioned arcade machines. Pixpil describes Earth Born as a “monster-collecting JRPG.” It’s got a surprising amount of depth for a game within a game.

Like the rest of Eastward, it’s delightful. Details like Earth Born are what make Eastward special for me. Not only is the gameplay both challenging and clever (and sometimes, punishing), but the worlds are built with depth. In both its dungeons and places of reprieve, Eastward is continually worth exploring.

Eastward will be released on Sept. 16 on Nintendo Switch, Mac, and Windows PC. The game was reviewed on Windows PC using a pre-release download code provided by Chucklefish. Vox Media has affiliate partnerships. These do not influence editorial content, though Vox Media may earn commissions for products purchased via affiliate links. You can find additional information about Polygon’s ethics policy here.