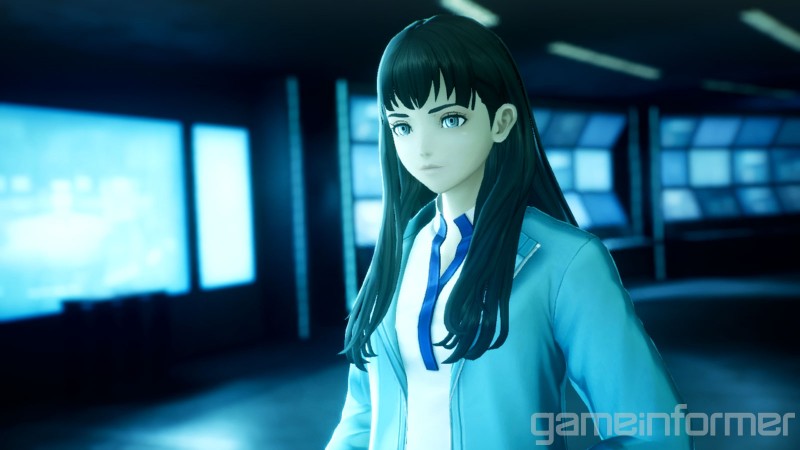 Last month, we offered some exclusive screenshots for the highly anticipated RPG from Atlus, Shin Megami Tensei V. This month, we have more screenshots, as well as some additional information about the characters you will encounter in the early stages of the game.

As we already know, the story of Shin Megami Tensei V puts you in the shoes of a third-year high school student in Tokyo, but when the tunnel he enters collapses, he’s taken to another dimension that’s overrun by demons. While the protagonist fuses with a mysterious man named Aogami to become a condemned being known as a Nahobino, it turns out he’s not the only person who was transported to this alternate version of Tokyo known as Da’at.

The protagonist soon reunites with Yuzuru Atsuta and Ichiro Dazai, two of his classmates. They each had their own close encounters with Da’at’s demons, but together they’re able to return to their version of Tokyo. Yuzuru is a good friend of the protagonist. Described by Atlus as “principled and upright,” as well as “responsible, capable, and assertive.” Meanwhile, Ichiro is a cheerful guy who can be a bit bumbling at times. He’s not the best student, and many of his classmates see him as a loser. Still, Ichiro loves livestreaming, which he was doing in the tunnel when it collapsed.

Once they group is back to their version of Tokyo, they encounter the caring and kind-hearted Tao Isonokami, another classmate of theirs. She explains that two parallel versions of Tokyo exist: their version, and Da’at. The demons are localized to Da’at for now, but she says they have their sights set on Tokyo. She then reveals to them that she knows all of this because she is a member of of Bethel, an organization that fights the demons they encountered in Da’at. Not only that, but the Japanese prime minister, the strategic and collected Hayao Koshimizu, serves as the main representative of the Japanese branch of Bethel.

The trio of the protagonist, Yuzuru, and Ichiro decide to join Bethel to protect Tokyo from the impending demonic invasion. The protagonist uses his powers as a Nahobino, while Hayao grants Yuzuru and Ichiro the power of the demon summoning program. Just as the team is getting back to their normal, everyday lives, they receive an emergency notice from Bethel that demons have appeared all over Tokyo; the invasion has begun in full force.

While the protagonist and his friends head out to protect people in the areas the demons are swarming, they learn that a group of demons are attacking their high school. Not only does this trap their classmate, Sahori Itsukishima, but also Yuzuru’s little sister and only living relative, Miyazu Atsuta.

With his newfound powers, the protagonist can fight demons using the standard command-based press-turn battle system, where striking enemy weaknesses can not only give you the upper hand, but also give you more turns with which to execute your plans. You do have to be careful though, as enemies can also strike your weaknesses and gain the momentum for themselves. All new skills such as Humble Blessing, Maziobarion, and Sanguine Drain allow you to employ a wider range of strategies in combat, while the Magatsuhi Skill system lets your party and your enemies activate special moves that can unleash powerful attacks or provide healing and support at crucial times.