A man robed in full protective gear raises his gamma gun and takes aim at a woman’s butt. As his finger pulls the trigger, green shockwaves pass through the target and bounce around the walls of the clinic. The patient wants to change her character’s genome, in the hopes it’ll give her an advantage in Fallout 76 — and the doctor is more than happy to oblige. He’s not even going to charge her for the consultation. It’s just another day in the world of CJ Martin, Fallout 76’s most dedicated role-player.

Brent “CJ Martin” Fairchild has been playing Fallout 76 since launch day, but he hasn’t finished the game’s tutorial. Instead, since day one, CJ Martin has donned medical scrubs and lab coats, dedicating himself to be the closest thing that Fallout 76 has to a non-playable character. He dispenses lore, quests, and restorative items for those anyone in need. He plays the part well, partially because the wasteland is already familiar to him.

“I have a lot of first-hand knowledge of Appalachia since I grew up twenty miles from [West Virginia’s] Berkeley Springs in real life,” Martin told Polygon over email. “So the mountains, fields and ‘cricks’ are just like the ones I explored as a kid.”

Initially, Martin’s scheme was a humble affair. He’d build little gift bags filled with healing items that he’d drop on the map for other people to find. He would also move his camp near nuclear warhead blast zones, where high-level enemies and radiation propagate, so that he could aid players taking on the toughest content in the game. After a little while, wasteland denizens started to take notice. The doctor started getting donations ranging from crafting recipes to items, and even started courting investors who wanted to see their caps put to good use. 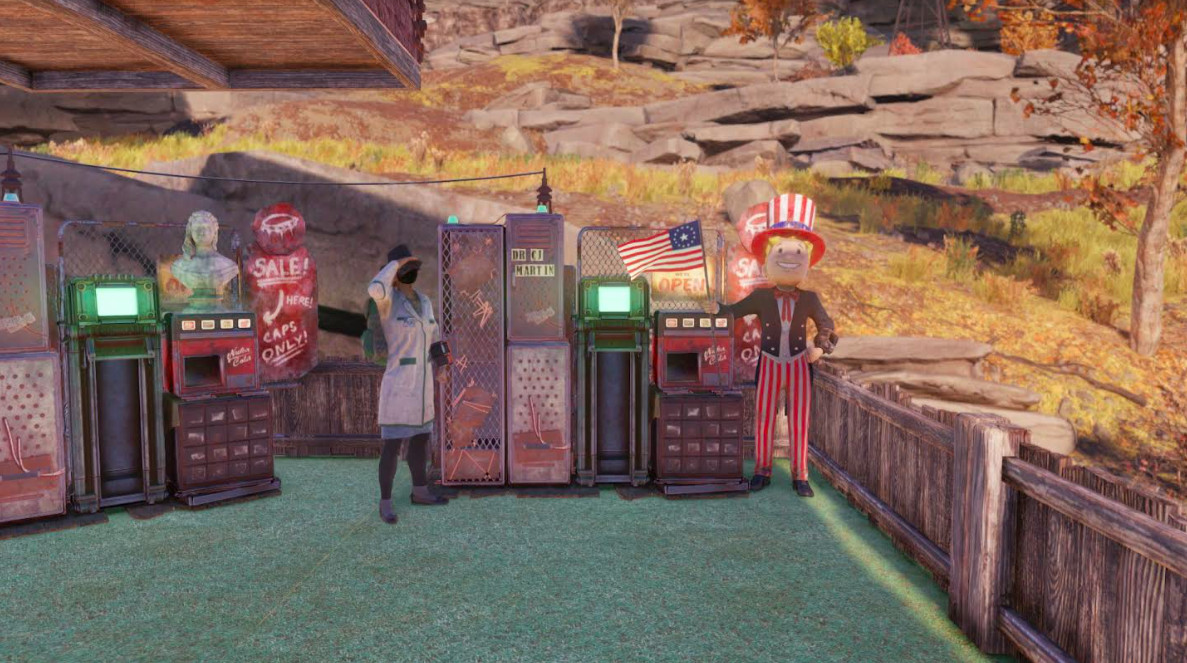 The one-man act started to grow into an empire. It helped that, after being plagued with cheaters who could materialize any item or weapon, Fallout 76 players started to expect easily obtainable healing salves. Earlier this year, Bethesda got a little better about handling “dupers,” and that’s where the doctor saw a huge opportunity. For him, playing Fallout 76 isn’t about profit — it’s about community. So, he dedicated himself to farming items en-masse so that he could sell them in bulk. Everything would be at a loss, but it didn’t matter. He wanted the clientele.

At current, the doctor estimates that he sells around 20,000 items a week, in addition to having around 20 vending machines and a handful of hospital franchises. When he logs into the game, his server almost immediately fills up with patients who want items, to be cured of diseases, or to build stronger characters.

“The clinic is the noisiest place I’ve ever been on area chat!” says Fallout 76 player Stacey Ambeau. “I went to sell some stuff to the clinic for super cheap and I couldn’t believe all the people there. The good doc was doing 18 different things at once.”

To deal with the demand, the doctor has started paying a salary to staff that is divided among departments including supply chain, marketing, and even security to keep these more peaceful players safe from harm. There are day shifts and night shifts. Actually, he has enough people farming for him to collect enough tick blood to craft around 2,000 Stimpaks a day — though the doctor still spends an average of three daily hours collecting materials for the cause as well.

To facilitate all of this, Martin also pays a chef to make food items for his workers as they farm, because Fallout 76 requires players to eat and drink to stay alive. And, to get the word out, Martin also pays clients to put up billboards advertising his clinics and services.

“I try to give our employees a real job feeling, offering paid vacation, commission, bonuses,” Martin said. “We have been studying sales trends, and analyzing our growth so we can start offering an in-game 401k plan, allowing our employees caps for when they choose to move one from our company as the game continues to grow.”

It’s a lot to keep track of, and the doctor says that he relies on apps, Google Docs, and ledgers to make sure everything is kept in order. But, the CJ Martin experience isn’t just about selling items. Players looking to put together optimal builds can come into the clinic to test out perks on dummy characters provided by the doctor, or they can calculate out their damage output. Newbie players can also get crash courses on the best perks and SPECIAL stats, as well as the effects of mutations, how item effects stack, and how the latest bugs and glitches affect their characters. Martin will even make house calls to follow up with his patients to make sure services or products worked as advertised. 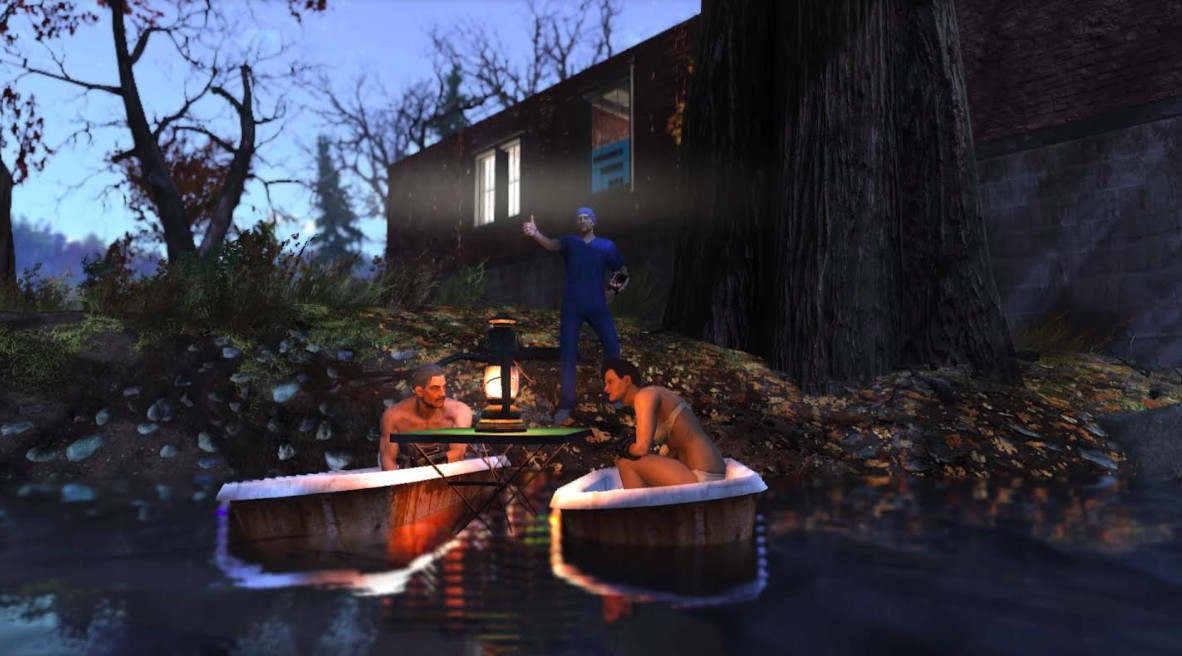 “Our testing area contains a pool for aquatic tests, fall damage testing set-ups, energy resistance, rad resistance, speed testing, as well as many other types of testing setups,” Martin says, noting that all of these services are crucial in an ever-changing game where mechanics are not always fully explained.

Martin will also devise fetch quests for intrepid players, and he’ll sometimes put himself in the line of fire for the benefit of others.

“I will purposely become over encumbered so that players have to escort me back to the Clinic,” Martin says. “And since I am pretty defenseless — I have no combat perks and never wear Power Armor — it usually requires the players have to protect me from monsters.”

Here, the doctor’s intimate knowledge with West Virginia becomes a small headache for participating players. He’ll take the long way home, sometimes stopping at workshops or locking himself up in places where strong enemies, like Scorchbeasts, roam the land. The harder the mission, the better the rewards at the end — good sports end up with a number of caps and legendary items if they succeed.

Players can also take the doctor along as a sidekick who can buff, craft, and farm as needed.

“When I become your companion for an adventure, you don’t have to eat, drink, heal, cure diseases, or recover from rads,” Martin said. 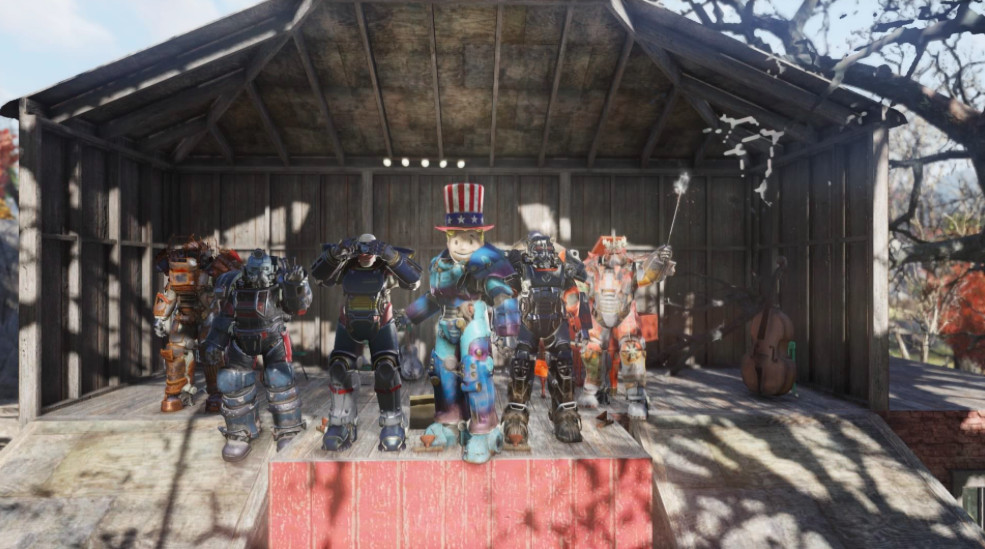 The doctor has become a pillar of the community — in my reporting of various groups, such as cannibals and mercenaries, everyone urged me to speak to the doctor. When players hold meetings for fight clubs, the doctor is invited to keep everyone in top shape. When factions are warring with one another, the doctor is sometimes called as a mediator that helps broker peace talks.

Morgan Brown, a devoted Fallout 76 fan, recalls that one time, an agent of chaos tried putting a bounty on the doctor to see what would happen. “But [we] put a ‘blind eye’ on the Doc to make sure no one would mess with him,” Brown recalls. Martin says that, at the time, multiple mercenaries told him that they refused to take the hit despite the number of caps on the line. It had such damning repercussions that Fallout 76 player that Chris Grote, a leader of an in-game faction, turned him away when he tried to apply as a recruit to his group.

“It was nice to see that with everything we do for the community, [everyone] stood up for me,” Martin says.

Even groups dedicated to terrorizing the wasteland know to steer clear of Martin.

“There are many raider factions in the game that are also familiar with the Doc, and consider him off-limits, as he supplies raiders with chems for cheap too,” says Marcus Jaurigue, another Fallout 76 aficionado. “And these same organizations have kicked out members because they were harassing the doc. 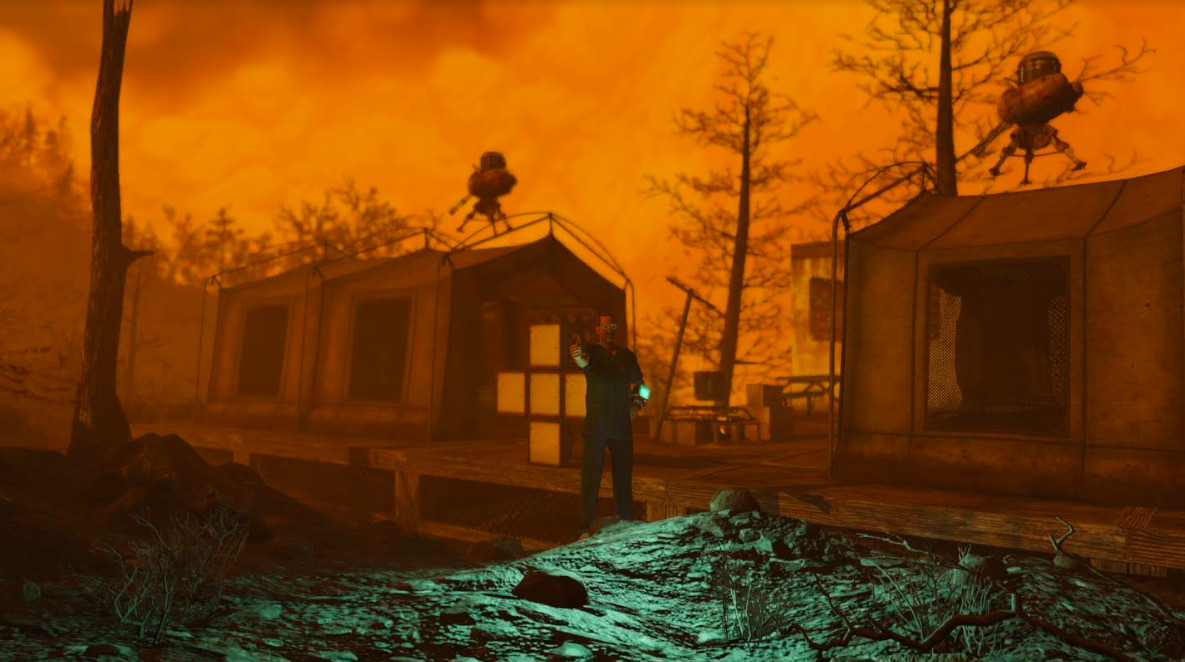 At the ready, the doctor stations himself near an active blast zone.
Bethesda Softworks / ZeniMax via Brent “CJ Martin” Fairchild

“There isn’t a more selfless person I know in the wasteland,” Jaurigue continued.

Unsurprisingly, one of the people that Martin looks up to is Mr. Rogers. “I’ve always believed that love and kindness are contagious,” he says. His theory was proven right when, one day, his Fallout 76 disk broke by accident. The community immediately rallied around him.

“By the next morning my Facebook and PS4 Messenger [were] filled with codes for PSN gift cards,” he recalls. “In the end It was the very community I work to strengthen that really saved the clinic.”

Nowadays, the doctor will still sometimes station himself near blast zones. Every so often, someone will look at this guy decked out in nothing but medical scrubs and wonder, what in the world is he doing out here without power armor? And the players picking up rations in between waves of enemies will laugh and say, “That’s the doc. He’s a badass.”