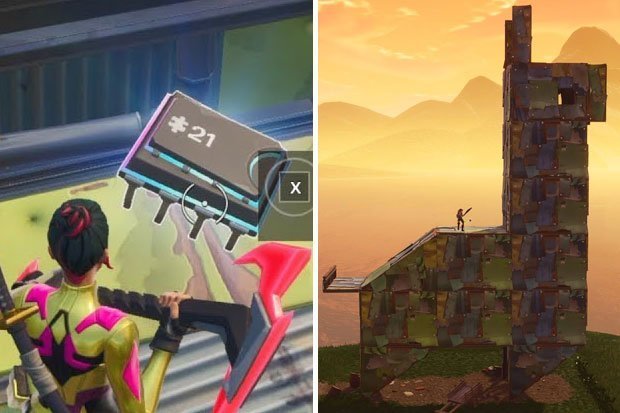 The end is in sight, only two more Fortbyte’s remain until all 100 have been revealed to players.

Today’s new Fortbyte, Released Tuesday, 16th July is Fortbyte 21, which has a clue that reads: ‘Found inside a metal llama building’

It’s possible that by now you’ll have earned the number of Fortbyte’s required to unlock the special Singularity Skin.

However, given that you need 90 of those Fortbyte’s to unlock the skin, it’s equally possible you don’t. Because let’s be honest, there might be some Fortbyte’s that were too challenging even at this stage in the season.

You’re in luck then, because today’s Fortbyte is ludicrously easy.

You don’t want to waste any time though, because we’re edging closer to the Fortnite Season 10 start date when you’ll no longer be able to complete these quests or collect the rewards.

When you do eventually unlock the skin, you might also want to grab the various (FREE) skin styles as well, which can be obtained by using our Fortnite Singularity Helmet Locations guide.

Need more help? take a look at out Fortnite Fortbyte locations guide so you can catch up.

In the meantime, keep reading, we’re going to explain how to solve the challenge for Fortbyte 21.

Even if you’re a pro, it’s not always easy when you can’t remember where to go when you have to locate 100 Fortnite Fortbyte locations.

As if that’s not enough, Epic Games have got a lot of Fortnite 14 Days of Summer challenge still live ready to be completed. That means there’s not long left to get the new skins to buy.

As if that wasn’t enough excitement for one day, the Singularity Skin is now live in the game if you want the various Singularity skin styles, you’ll need to look for the Singularity Helmet locations across the map.

Maybe you just want to know what’s new in Fortnite? Well, Epic Games should be dropping a new Fortnite 9.40 update later this week. Click the link to see what else Epic Games could add to Battle Royale, Creative and Save the World.

As we stated previously, this Fortbyte is super easy. The metal Llama building has been in the game for so long that if you don’t know where it is, we’ll be pretty surprised.

That said, everyone has to start somewhere, so if you are new to the game and looking around the map thinking ‘where is the metal llama building’ then don’t worry, we’re here to help.

The metal llama building is north west of Junk Junction and is being a building-sized metal llama, it’s hard to miss it.

If you need some hand-holding to help find it, just take a look at the gameplay on the above video with Fortnite Content Creator, Bodil40.

When you find and collect the Fortbyte, just make sure to finish the game for your progress to count.

And that is it! Check back tomorrow for our FINAL Fortnite Fortbyte guide.