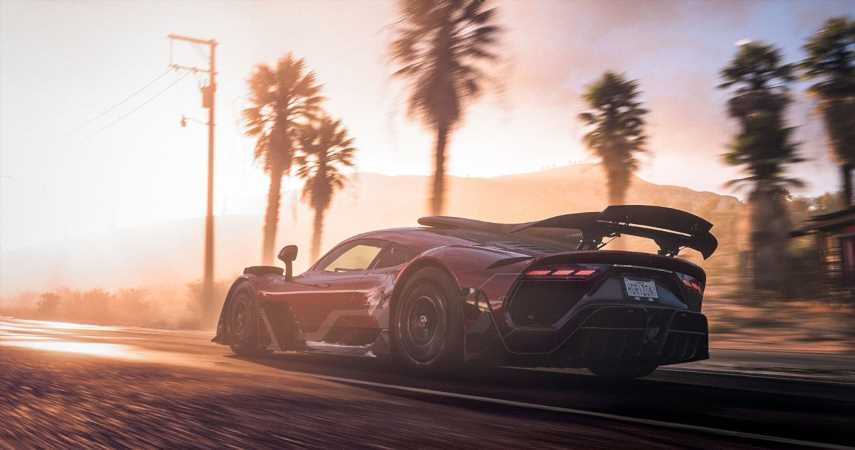 The Forza Horizon 5 reveal last week really blew me away. It’s no surprise that FH5 won the award for the most anticipated game at E3 2021 because it was by far the most breathtaking trailer in the bunch. I have never been a Forza fan, or a racing game player for that matter, but I’m nevertheless hyped out of my mind to drive around Mexico and experience Horizon 5 when it launches later this year.

But as everyone knows, the hype train doesn’t have any brakes. There was no way I was going to sit around and wait for Horizon 5 to come out. So I jumped on Game Pass and downloaded Forza Horizon 4 to check it out and see what I’ve been missing (for free, thanks Game Pass). Horizon 4 is everything that I’d hoped it would be, and I’m even more excited for Horizon 5 now, but I swear to God the game better not call me by my real name next time.

I don’t know if this is a staple of the Forza Horizon series, but it seriously creeped me out the first time I heard it. After the first little onboarding race that takes you through the four seasons of Forza Horizon 4, a short cutscene shows an event coordinator with a clipboard looking to sign in all of the racing participants. You’ll hear her say, “Do we have X?” With X being your actual name.

When I heard her saying, “Do we have Eric?,” I figured that the character’s name just also happened to be Eric. But after she says it, you’re brought to a character creator menu where you can select from one of ten premade characters. I realized she had been talking to me, Eric, the player, and the horror quickly set in.

I can only assume the game was pulling my real name from my Microsoft account, but the whole thing felt weirdly invasive to me. I’ve used a screen name since the days of IRC chat room and AOL Instant Messenger. Even my IRL gamer friends that I’ve known for years call me by my online handle when we’re in game. This is core to gaming culture. Tyler Blevins doesn’t have fans, Ninja has fans. Kyle Giersdorf didn’t win the Fortnite World Cup, Bugha did. This is something we all understand and abide by, but yet, here’s Forza Horizon 4, calling me by my own damn name to my face. 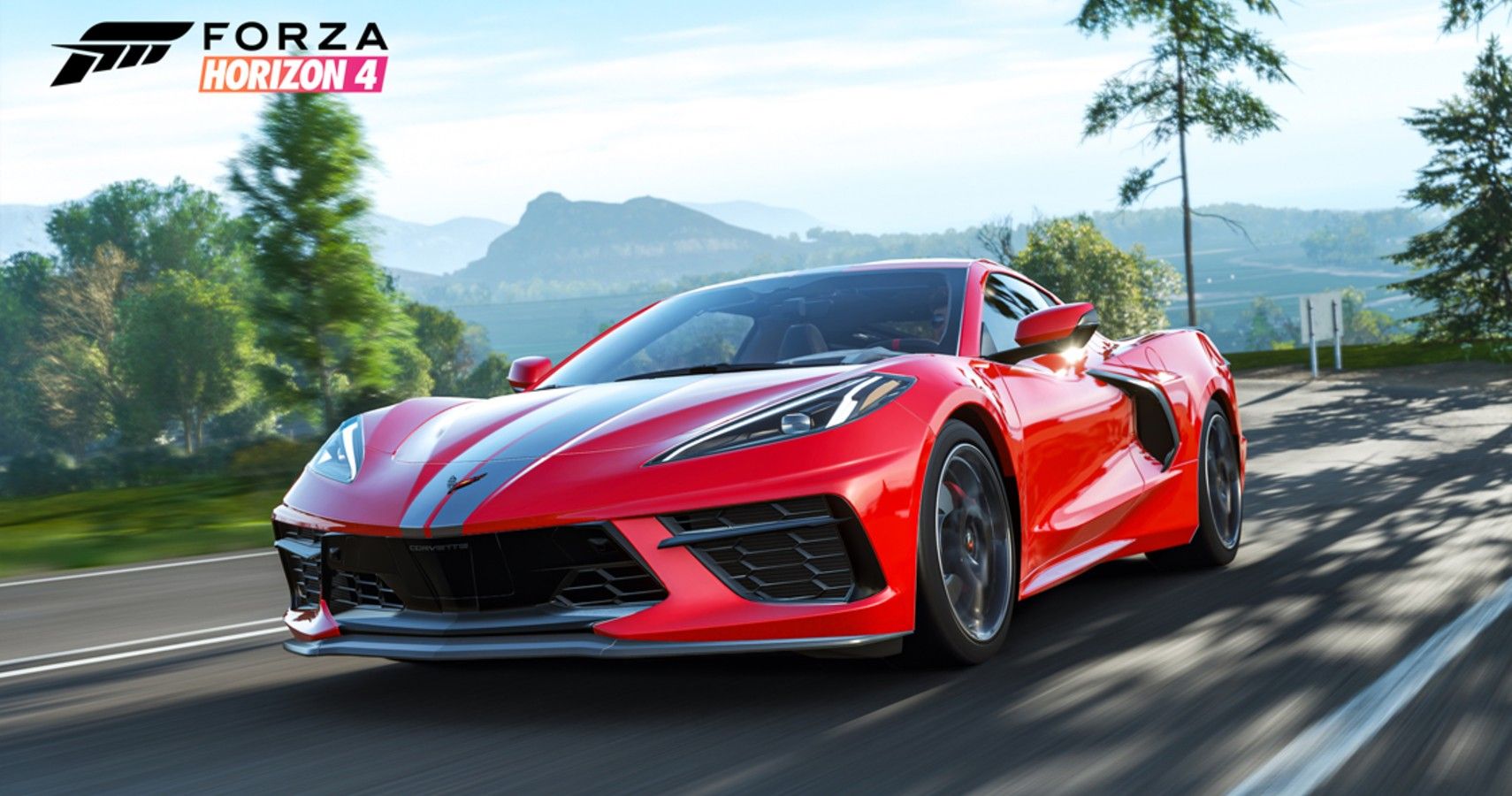 I can acknowledge that this gimmick probably delighted a lot of players. I’m sure there’s some vain weirdos out there that enjoy hearing their own name. In the book How To Win Friends and Influence People, the section Six Ways to Make People Like You says, “Remember that a person’s name is to that person the sweetest and most important sound in any language.” That sounds pretty unhinged to me, but it must be true. If it weren’t, why would every sales person I’ve ever met say my name over and over again. “Well, Eric, I have to ask, Eric, what can I do to get you in a pre-owned Hyundai Sonata today, Eric?” Well, Roy, the first thing you can do is stop perceiving me.

My point is, I don’t want to be me in a video game. I want to be a badass race car driver named Clutch Blackwater or something. Not Eric, the dumb American with bad vision who has no business driving a Porsche in Bamburgh. Even when I selected my character, I felt like I had to just go with the one that most accurately reassembled me. Every time I log in, my GPS greets me with my flesh name, and every time I start a new race I’m referred to with the E-word. It’s a level of immersion that I wasn’t looking for in my race car game, and I think Forza Horizon 5 would be better off without it.

I think the whole name system is kind of a disaster, even if you’re not bothered by it like me. The game doesn’t have every name in the database obviously, so what happens if your name isn’t one that Forza recognizes? Well, you have to just choose from a long list of names that the game does recognize. Looking at the full list of names is a bit off putting. Non-white names are just a small fraction of the total. There’s two different spellings for Hillary, but exceedingly common Arab names like Amir and Ahmed don’t make the list. If your name isn’t recognized, you probably don’t want to choose a random name to go by, so it also offers a bunch of nicknames to choose from. So sorry, Ahmed, would you like to go by Brotato instead? How about Abroham Lincoln, Count Driftula, or even Sausage? 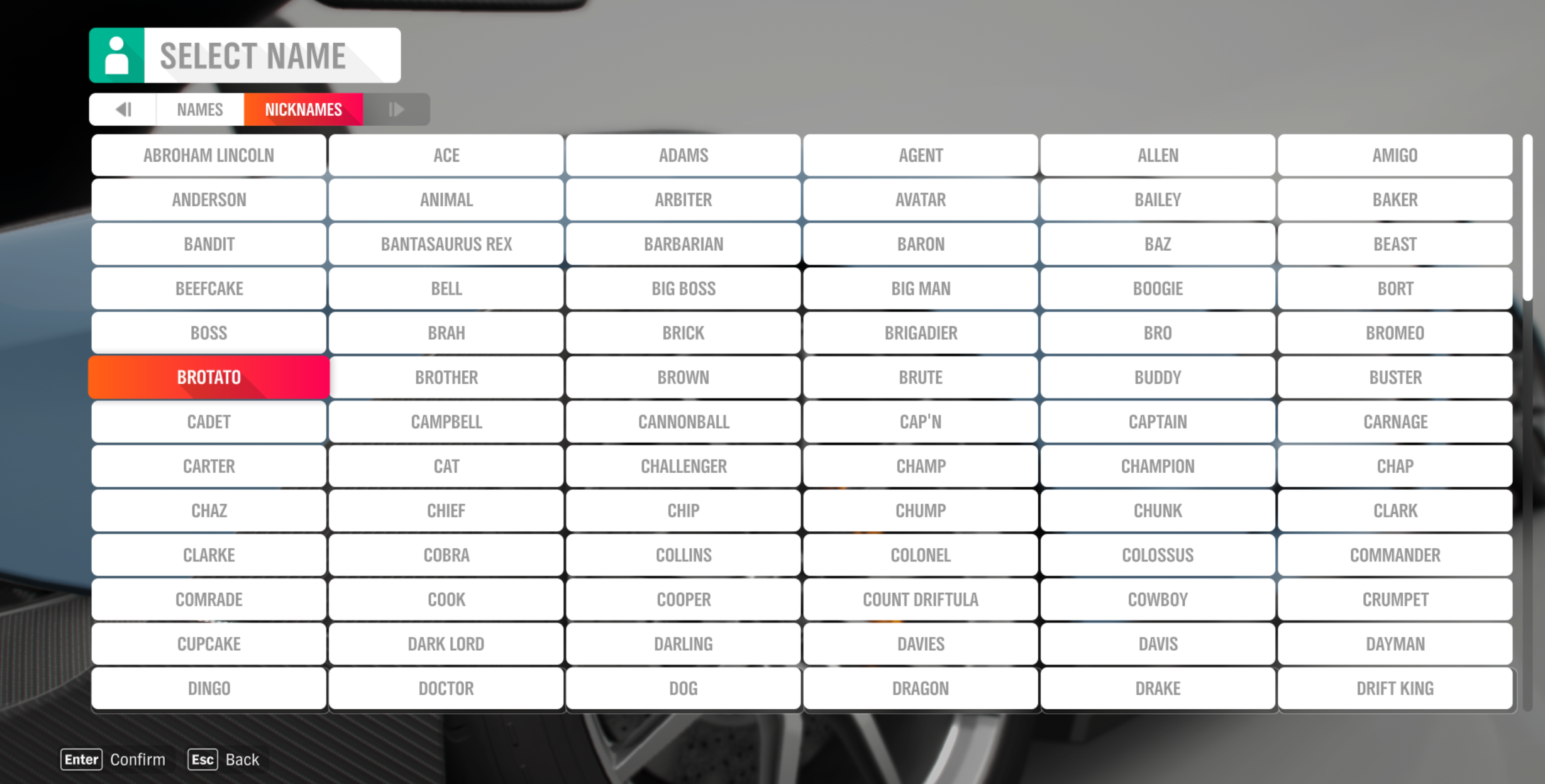 The names are all gendered, meaning if you’re a man named Andrea, for example, the game will address you with she/her pronouns. I don’t think I have to explain why that’s bad news, and I expect that Horizon 5 will add gender options for each name, if it ends up continuing with the system at all.

Alternatively, we could all just go by Dark Lord, Big Man, or simply Woman. Those are all real nickname options.