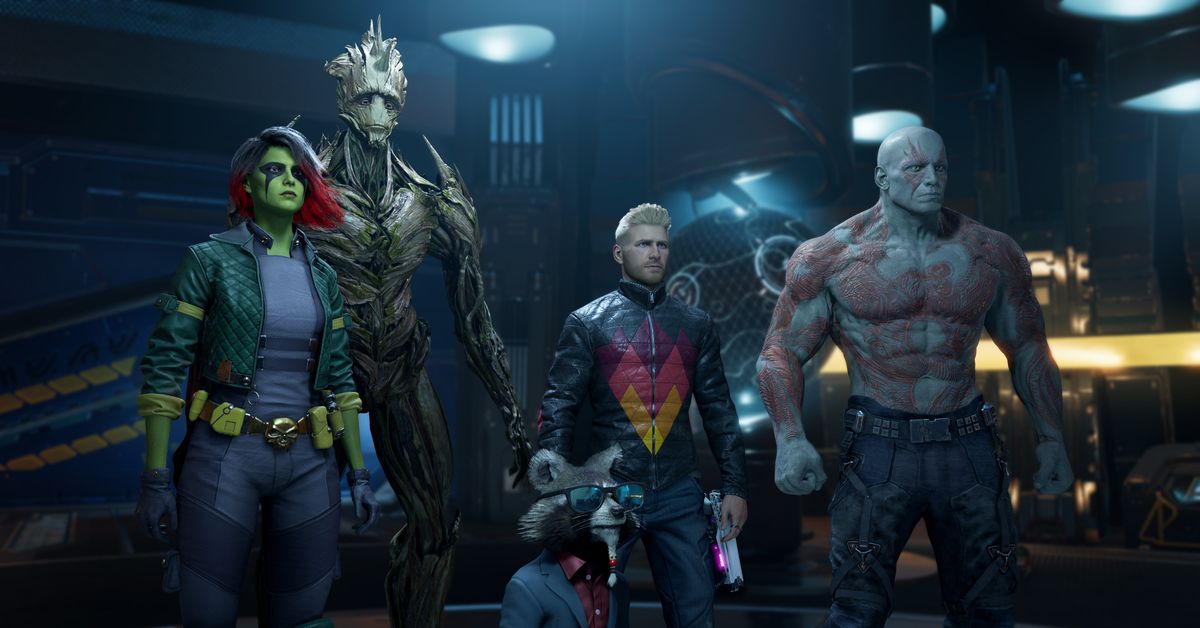 The action in Marvel’s Guardians of the Galaxy isn’t necessarily squad-based or team tactics combat, but there is an order of battle the player must follow, especially for the big set-piece battles. Keep this in mind if you pick up Eidos-Montreal’s take on Marvel’s adventure-dramedy at the end of October: Have a plan, and make choices to advance it. You’re not going to get out of a throwdown simply by telling Rocket to blow everything up.

This is because the Guardians all deal two types of damage: regular, and stagger. Stagger damage is what really breaks down a foe’s defense (or shrinks their health bar). It is frustrating, seeing your four teammates deal no damage of either type without your instructions, and they can barely divert a team of mind-controlled Nova Corps from focusing all their firepower on Peter Quill/Star-Lord, whom you play exclusively through the game.

But in hindsight, I realize the differentiated damage and the need to deliberately involve your cohorts is what makes Guardians of the Galaxy a legitimate team game. Without this, I feel like I’d be running around as Star-Lord and using Gamora, Drax, and Groot as special-attack weapons, rather than relying on them as teammates, much less seeing them as characters and co-stars.

In Guardians of the Galaxy, there is no rotation among playable characters like there was in Square Enix’s other hero ensemble, Marvel’s Avengers, which launched a year ago. This might strike Guardians fans as a little counter-intuitive, given that this game deals with fewer teammates, and canonically, they’re more of an egalitarian team of misfits rather than a main hero with four sidekicks.

“We wanted to deliver something that would play against expectations, while leveraging that sentiment, that feeling of the Guardians,” Jean-Francois Dugas, Eidos-Montreal’s senior creative director for the game, told me after a hands-on session with the game last week.

Forget petting, you can talk to the dog in Marvel’s Guardians of the Galaxy

“What if, instead of saying, ‘I’m following the story of the Guardians,’ I am actually one of the Guardians, and actually I’m going to interact, and chip in, and be part of the action, and be engaged,” Dugas reasoned. “And yes, if we’re Peter, the so-called leader, it means that you make some decisions. But the Guardians are very well alive, and they might do unpredictable things that will force you to adapt as a player.”

Eidos-Montreal gave games press about 90 minutes worth of mid-game content to explore in the hands-on event. Lacking the onboarding tutorials at the game’s beginning (we were shown a series of videos instead), combat and even a few simple puzzle solutions were solved with a lot of trial-and-error. Quill’s four teammates are directed through a pop-up wheel summoned by a bumper button press. This is how you tell Drax, for example, to plunge both knives into a tank-like enemy. But it’s also how you tell Rocket to fix a wonky blast door that won’t open during an exploratory interlude between fights.

In one instance, Rocket refused to help, and so I cycled among the other Guardians, all of whom shrugged. The solution: Ask Rocket again. Being unfamiliar with the Guardians’ wheel, I didn’t see that his icon was still lit, meaning there was still an available dialogue option. I spent at least 10 minutes running around the room looking for a missing clue until another player told me what to do.

Leading into the fighting that followed this, a dialogue choice meant the difference between catching enemies by surprise, or facing an advance team aware of your presence. It’s not obvious what the “correct” choice is, in this or any of the other dialogue sequences, and I found that rather refreshing. The lack of handholding meant these would be moments to call my own — and to own their difficulty and messy complications.

That difficulty spike, though — players who start from the game’s beginning and have more time to get familiar with combat (particularly the usefulness of Peter’s melee strikes and rocket boots for evasion) probably won’t face it. But in a hangar bay at Nova Corps’ outpost, the Rock, I learned some hard truths about effective fighting in this game. First, don’t bother putting Peter into cover; it’s destructible, and firing from it returns little benefit as his Element Guns are usually at low-damage range. Second, when you see any kind of button prompt appear on the screen, use it. This usually happens when the camera pans over a barrel or piece of suspended machinery. Hitting the button invites Drax to throw the barrel, or Gamora to cut a cable, smashing whoever’s in the way.

Otherwise, running and gunning makes maddeningly little headway. All enemies must be staggered, as they usually have an active defense up to repel a standard attack. Have a plan for clearing that out of the way, then get in close to drop them for good. Of course, your allies’ attacks have cooldowns of variable length, and when all you’re left with is Groot’s ensnaring ability, you really understand the consequences of spamming everyone’s haymaker attack without a plan for following that up.

Now, about the huddle: Perhaps you caught wind of this turn-the-tide gameplay mechanism when Square Enix showed it during the company’s E3 2021 presentation. On its face, it does sound rather goofy. When the breaks are beating the boys, the girl … and the, er, tree, Peter pulls everyone aside for a pep talk. How this takes place at the same time bad guys are pounding you with grenades and laser fire is never really justified; it appears to take place in some corner of Peter’s psyche.

Players must listen to their friends gripe, paying attention to the words they’re using (which are highlighted in the air behind them) and choose a reply that meets those concerns, to fire them back up. Picking the right one gives everyone a damage buff; the wrong one gives only Peter the damage buff. Peter then hits play on his Walkman and you get a 1980s hit matched to whatever he said.

Sure, that’s sort of a hammy application of what makes the Guardians special: the solidarity of misfits and the energy of a one-hit wonder being greater than any individual super-power. But I allowed myself a fuck-yeah fist pump when we rallied back to Patty Smyth’s power vocals on Scandal’s “The Warrior.” (A second playthrough’s choice of “Hangin’ Tough” by New Kids on the Block was decidedly less righteous.)

“[Jean-Francois] had a vision for the huddle very early in development,” senior gameplay director Patrick Fortier told me. “It was Peter rallying the team, like, a really football-style huddle … Even though it interrupts … it creates this moment of tension, it’s this moment where Peter can assert himself as the so-called leader. It’s not just about saying it, but like creating mechanics that maybe are gonna make you feel that, as a player, and then it has a really good gameplay use.”

Most importantly, everyone’s health is refilled by the huddle, making this a valuable saving throw to hang onto until you’re really getting beaten down. I had been using it as soon as it was available, thinking that’s what I was supposed to do. When multiple Guardians have been knocked down (they can be revived, but you’re likely to get karate-kicked in the head while doing so), the huddle will swing the momentum, whether or not everyone gains the damage buff.

Wrapping all of this action and combat is a richly illustrated and considerately written storyline and dialogue, which the player may explore to whatever depth satisfies them. Completionists and big Guardians of the Galaxy fans will probably spend a ton of time rooting through the Milano, invading their teammates’ privacy and querying them about the talismans and keepsakes they have laying about. But those who aren’t as invested in the lore can bail out of these dialogue options and not feel like they’re missing out.

This leaves room for light role-playing within the structure of what is more of an action-adventure narrative. (Guardians of the Galaxy does have a limited crafting system and perks matrix to amplify the team’s abilities as the story progresses.) For example, as the team was on the way to the Rock to pay a fine to Nova Corps, Peter caught Gamora on the bridge engrossed in her guilty pleasure: collecting dolls.

The game gave the option of leaving Gamora alone, or prying into her hobby. Although the game is constantly paying attention to your dialogue and other choices, we were told, I didn’t get the sense that either one affected the story or the characters’ relationship. It’s just a way to keep track of Peter Quill, the character, as you see and would play him.

Some technical difficulties meant I didn’t get the tutorial videos before my first playthrough. I viewed them after my first try, and now, understanding that even with a gang of five, no fight can boil down to brute strength or gear, I found Guardians of the Galaxy growing on me, challenging my ability to plan as well as execute. The slice I played was paced out with enough intrigue and humor to keep the game from feeling like it was shuttling me from one set piece to another.