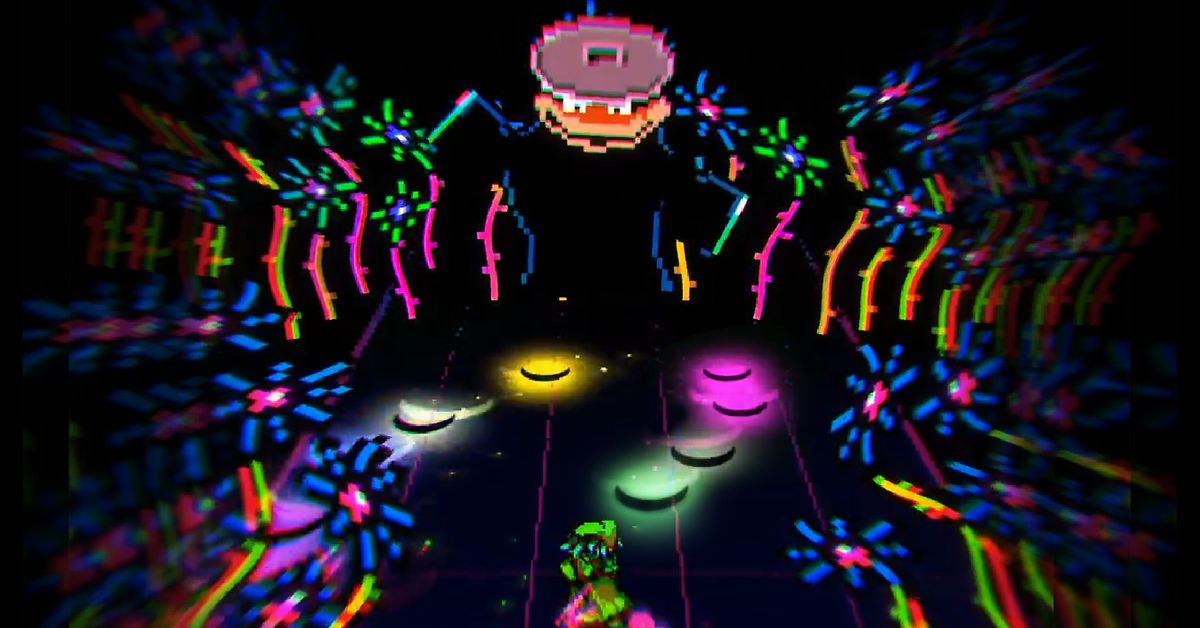 It’s hard to forget my time playing Tool songs in 2008’s Guitar Hero: World Tour. They are a clear standout: You don’t get to see the virtual band playing, but instead, a living background takes the stage. It moves and morphs — from a spiral of faces to a sea of eyes. The songs are long and difficult, stranding you in place for what feels like an eternity, forcing you to hit hundreds of notes while horror threatens your performance.

I always wondered what would happen if those scenarios would go one step further — if those spectral curves would become actual obstacles in the way; if those eyes would try to attack me. Everhood provides the answer.

The so-called “unconventional adventure RPG” looks similar, at first glance, to Undertale. The premise follows a wooden-doll protagonist – whose arm has been stolen – and a cast of colorful, distinct characters stuck in an ethereal realm. As they chase the limb-thief through different areas (in an overworld view similar to Undertale), enemies interrupt you for combat encounters. Instead of the usual RPG action sequences, however, fights take the form of musical battles. As soon as I saw the protagonist jumping and dodging notes inside of a rhythm game fretboard, I knew Everhood would be special. (The game’s full name is Everhood: An Ineffable Tale of the Inexpressible Divine Moments of Truth — for the sake of time, I’ll stick with the shorter version.)

An ATM, a knight, a frog who plays the guitar – every time conflict arises, the perspective changes and you’re in third person facing the fretboard. Based upon the idea of putting the player inside interactive music videos, the goal of Everhood is to endure everything the screen throws at you until the battle is over. Songs jump from EDM to rock, from house to power metal ballads. Each character adds their own quirks — some are more melodical while others are outright aggressive, forcing you to react quickly and restart a dozen times until you’ve learned the patterns.

It’s part rhythm game and part bullet hell, in which the visuals take the starring role. Some encounters are straight up psychedelic. One rapidly spins the entire fretboard while you dodge notes and hang on for dear life, only to completely disappear in a subsequent segment as your character stretches across the screen. Fluorescent gnomes slowly occupy the space, and aberrant colors wash out with your movement.

Similar to the seminal Undertale, Everhood consistently interrogates its own design tenets. The environment morphs from a D&D-style campaign, to a racing minigame, to a Shining-like labyrinth chase. My expectations were defied at almost every turn. I was ready to be surprised, considering that both games rely on absurd conversations, grim characters, and heavy use of visual imagery that doesn’t respect the norms we’ve grown used to in legacy titles. But, while Undertale’s footprint is clear in Everhood, the latter deviates in crucial ways.

[Editor’s note: photosensitivity and epilepsy warning for the following video.]

Back when I first played Undertale, I opted for the pacifist route. I couldn’t bear to murder the colorful characters I met along the way. To this day, I don’t think I have it in me to kill any of them – the other routes remain a mystery to me.

Upon realizing that Everhood presents different endings, which are also based on the player’s choices (one requires you to walk on a straight line for three to four real-time hours through an “infinite” corridor inside an optional area), I wanted to follow the pacifist route once again. This seemed like an easy enough task, considering that none of the musical battles were lethal — or none of the enemies I encountered, that is. And so I continued with the story.

But something felt off. Despite my best intentions, certain conversations – and mysterious warnings – hinted that this world’s characters might desire a different outcome. The people in this realm, bound to immortality and the stasis of time that comes with it, have been pursuing a way out for centuries. I managed to ignore this until I hit the end credits. Here, the protagonist gained the ability to deflect attacks. The expectation, working as an Act 2 of sorts, is to go back to the start and repeat every encounter with this mechanic in hand, fighting back against everyone who I met in the first half of the story. Deflecting attacks would actually kill the characters, fulfilling their wishes to escape. But I pushed ahead, determined to reach the ending that would spare everyone.

I then got stuck in the last battle and put the game down for a couple of months until I started working on this piece. I returned, expecting a big revelation after hitting the end credits. With Undertale still coloring my perception, I expected Everhood to reward me for my pacifist efforts — to discover that Everhood’s characters didn’t really want to die. But that was not the case. The pacifist route was not, in fact, the “true ending.” A message on screen put it into simpler words: “Only death can release them. It is how it was intended. If you have come here to receive an ending, I can’t give it to you. As you are the ending.”

Everhood takes the standard of rhythm games and builds micro-worlds into each song. It presents a charming yet simple art style, only to distort it later, changing perspectives and permeating the screen with some of the most impressive and fear-inducing visual effects I’ve seen in years. It draws just enough inspiration from other games to lure players in, only to pull the rug out from under them, to great effect.

The similar presentation to Undertale is a facade – the latter interrogates the wanton murder that permeates so many RPGs and, while tough, rewards you for avoiding it. In Everhood, however, the expectation is the complete opposite. With so many characters trapped in an infinite loop of suffering, Everhood posits a passive, pacifist route as the more selfish approach. As someone who always follows the “good” route in games, it’s hard to reconcile with the fact that I’m the only one who can free these characters from the burden of immortality.

In Everhood, rhythm-game challenges take on new life. I’m no longer just facing difficult note patterns or distracting backgrounds. Every encounter is a story, every song a soon-to-be memory of the character on the other side of the fretboard. I’ve come too far to give up now, and I’ll do everything I can to save them — even if it means opposing what I’ve always believed in.