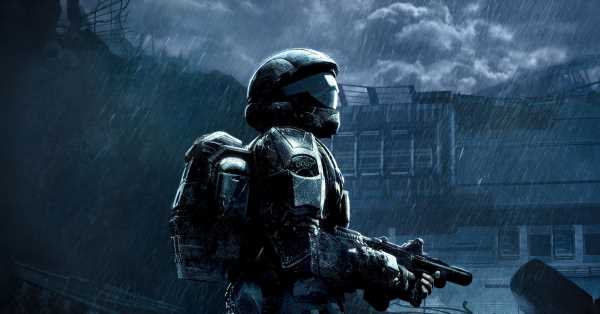 Since it first released on the Xbox 360 back in 2009, Halo 3: ODST has remained a unique entry in the sci-fi shooter Halo series — and according to developers who worked on the game at the time, that was entirely the point.

According to Joseph Staten, ODST’s creative director and lead writer, the core development team that worked on the game had originally been assembled to work on Lord of the Rings director Peter Jackson’s cancelled Halo Chronicles. “When that project fell apart, we were left with this really experienced core team of guys, all of whom had been around since [Halo: Combat Evolved],” Staten told Kotaku back in 2009. With the dissolution of Halo Chronicles and Halo Reach already well into production, Staten and the rest of the team decided to create a new entry in the Halo universe — one that would probe at otherwise overlooked corners of its world through the perspective of someone other than franchise hero Master Chief.

The result was Halo 3: ODST, a first-person survival shooter that takes place in the same time period as Halo 2. It’s set in the ruins of the East African metropolis of New Mombasa, played from the perspective of a non-enhanced special ops shock trooper tasked with finding their lost team members in the aftermath of the city’s occupation. The game is a subdued, down-to-earth detective story in an abandoned city riddled with scattered patrol squads of Covenant soldiers ready to tear the player apart if they’re not careful. It’s also my favorite game in the Halo series.

There’s a lot to love about the game, from its free-roaming open-world setting that allowed players to realize the experience of fighting the Covenant in a futuristic city first glimpsed in Halo 2’s E3 2003 demo, to its emphasis on tactical stealth and survival as opposed to the series’ more offensive-driven combat loop, to its moody, noir-inflected, orchestral jazz score. But what endures as my favorite part of Halo 3: ODST is something that has never quite been replicated by any other Halo game, or really any other game I’ve encountered, and that is the narrative design of ODST as seen through its diegetic waypoint system.

The opening minutes of Halo 3: ODST placed players in the role of “the Rookie,” a silent protagonist and a recent addition to a shock trooper team. Awakening inside a drop pod that crashed into a building following the Covenant slipspace rupture seen in Halo 2, the Rookie falls from the pod and is forced to heal themselves and fend off a group of Brute soldiers and Grunt underlings. After you defeat these enemies, your heads-up display will direct you to interface with the Superintendent — an artificial intelligence responsible for New Mombasa’s urban infrastructure — in order to gain a better grasp of where you are and what happened to your team.

Once you interact with a nearby payphone that begins ringing on its own, a waypoint compass will appear at the top of your HUD, and an interactive map of the city-hub will become accessible through the game’s menu. This waypoint directs you to the first of several artifacts left behind by members of your ODST team, prompting playable flashback missions as seen through the perspective of one of your four teammates. But that’s not all. As you make your way through the city-hub to your destination, something strange starts happening to the environment around you.

Several of the video billboards throughout the city begin to change, as if reacting to your presence. While at first these appear to be innocuous environmental details, it slowly begins to set in that these supposedly automated traffic warnings and directions are actually attempts by the Superintendent AI to communicate with and guide you through the city, alerting you to roaming Covenant patrols and alternate routes to safely avoid detection. While this is a cool detail in and of itself, it’s even more fascinating that the Superintendent AI also directs you to collectible audio logs housed in phones and kiosks scattered across the city, each of which tells a side story centered on a young New Mombasan girl named Sadie with a powerful bond to the Superintendent AI. While the missions of Halo 3: ODST are experienced through the perspective of the Rookie and his squadmates, the cutscenes that set up those missions are relayed through the perspective of the Superintendent AI, who remains an unspoken yet ever-present character within the game’s world.

Replaying through Halo 3: ODST recently, I found myself impressed by how thoroughly the Superintendent’s presence has been woven into the environment of New Mombasa, and I wondered why so few games since have found a way of incorporating waypoint markers and directions into their worldbuilding. The closest contemporary to Halo 3: ODST’s Superintendent that I can think of are the ethereal messages that materialize around the island of Blackreef in Arkane Studios’ Deathloop, guiding the character Colt on his journey to kill the Visionaries and break the time loop that traps him there. Aside from that, most waypoint systems in first-person games exist as either non-diegetic aspects of the game’s user interface or comically obvious systems like the glowing green arrow that points the player in the “right” direction in 2013’s Bioshock Infinite. As much as I would love to see other developers take a page from Halo 3: ODST’s design by crafting storytelling mechanics that incentive exploration and attention to environmental design, I also recognize that much of what I love about the game’s narrative design is an intrinsic byproduct of the particular story Bungie was trying to tell through that game — which only further emphasizes why Halo 3: ODST is my absolute favorite Halo game.

Fans of Halo haven’t seen anything in the series quite like Halo 3: ODST in the 12 years since its release. While 2010’s Halo: Reach was a prequel, it was also Bungie’s swan song from the series, and subsequent entries produced by 343 Industries (with the exception of Halo Wars 2) have largely centered around the post-Halo 3 story arc of series protagonist Master Chief. Whether there will ever be an opportunity for a future side story-like entry in the Halo series similar to Halo 3: ODST is still an open question. Until then, the game remains an impressive and deservedly lauded entry in the franchise, full of tiny touches that are still worth remembering, appreciating, and learning from.