I promised myself that I wouldn’t spend any money on Genshin Impact. I’ve always been able to enjoy free-to-play games without cashing in on microtransactions — I think my worst offense before now was spending a fiver on Yu-Gi-Oh Duel Links about three years ago, and I got a Blue Eyes White Dragon out of that. I gambled once, won, and said, “Well that’s it. Time to pack it in.”

But the Genshin Impact Battle Pass called me by my name and told me I needed it. It’s only available to purchase after you reach Adventure Rank 20, which is by no means an easy feat. It’s reserved for the Genshin elite, the people who toil away weekday evenings scheming with Diluc at the Dawn Winery. I’d put in at least 30 hours before I even became eligible for it.

Anyway, I told myself I wouldn’t even bother looking at it, lest temptation get the best of me. But the thing about Genshin Impact’s Battle Pass is that there’s a free variant too, so you have to look at it in order to redeem rewards for completing in-game challenges. It’s constantly in your face, waving a virtual credit card machine around and asking for your CVC. “You cooked ten meals, have some free experience. Also, want to spend 20 quid?” 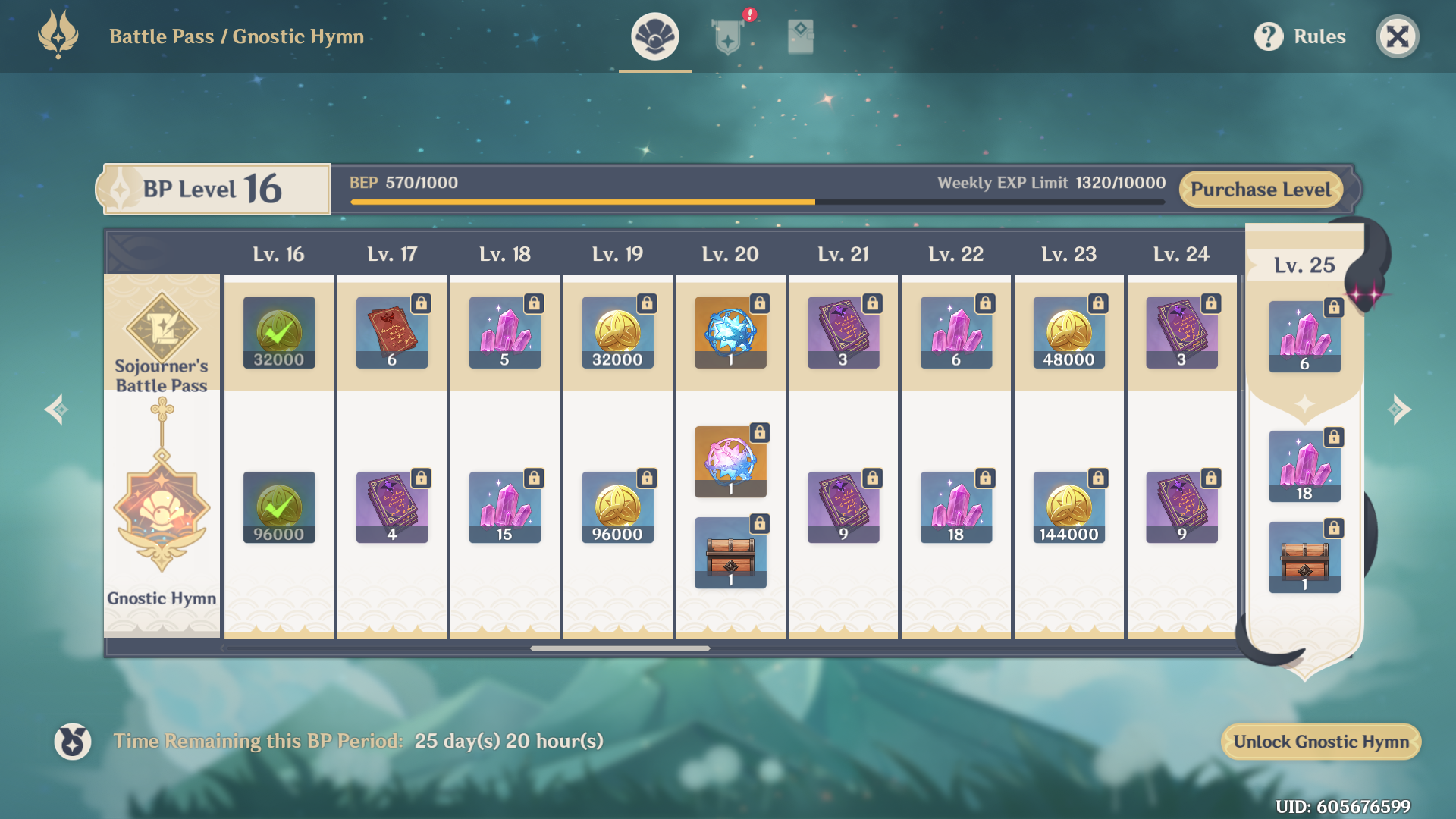 So I had a look. I’m not going to lie, the descriptions for each Battle Pass option are almost absurdly arcane. Instead of being called, “Battle Pass” and “Super Battle Pass,” Genshin Impact’s options are titled “Gnostic Hymn” and “Gnostic Chorus.” One was a tenner, and the other was $21. I opted for the more expensive one — go hard or go home. Gnostic Chorus contains all the rewards from Gnostic Hymn, plus it advances you ten levels on the Battle Pass meter. Bargain, right?

Wrong. The rewards are crap. Simply playing Genshin Impact for an hour a week will ensure you’re never short on Mora, the in-game currency used to purchase items from traders and level up characters. On top of that, all of the good stuff is bought using Anemo or Geo sigils anyway, which you can only get by playing the game. You also get some weapon enhancement materials — not to be confused with weapon ascension materials, which are rare and would probably make the Battle Pass at least half worthwhile — and some other very mundane items that are irritatingly overabundant in ordinary play. I got the Battle Pass, looked at the spoils of war and thought, “… shit.”

Let’s cut the bull and talk about spending money in Genshin Impact like grown ups. If you’ve read our tier list, you’ll know that everybody wants to pull Diluc or Venti from a Wish. For those unfamiliar with gacha lingo, this means that people gamble for packs — essentially loot boxes — that feature weapons, artifacts, and new characters. This is pretty much the only way to get the most powerful fighters in the game — something that becomes startlingly apparent when Genshin Impact forces you to play as them during certain story missions before taking them back off you at the end. When it comes to co-op events like the Elemental Crucible, you’ll see plenty of Dilucs and Qiqis running around as if they own the place. It’s like being a seven-year-old and watching Cristiano Ronaldo on the telly, turning around to your mam and going, “I want to be him!”

There’s a whole separate microtransaction section devoted to Wishes, which is where you get to try for these rare and powerful characters. Basically, you use special items called Acquaint Fates or Intertwined Fates. These are tough to come by, despite Genshin throwing millions of them at you in the first few hours, just to give you a taste. You can convert Primogems, another in-game currency gained from completing challenges, into Fates, but it’s very time-consuming to collect them. You can also buy Primogems, which is less time consuming, but expensive. There are no true winners in gacha. 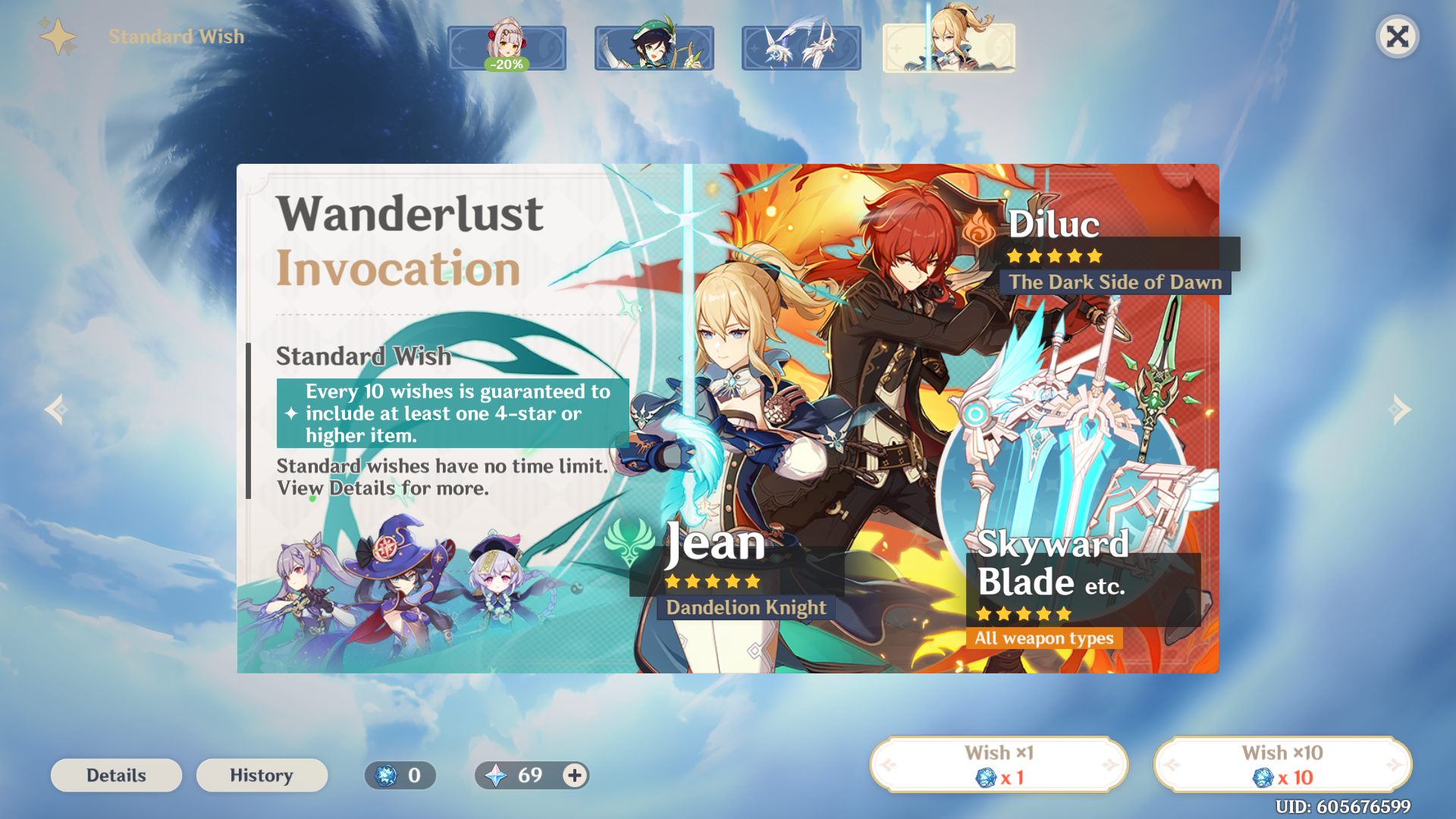 So let’s go back to the Battle Pass. I spent $21 on things I can easily get in-game. The reward for getting to level 30 on a given period’s Battle Pass is a rare sword. I have loads of rare swords — on the flipside, I have zero rare characters. It is not a particularly enticing prize, and, in my experience, a complete and utter waste of money.

I think the reason I was okay with buying the Battle Pass in the first place is because the rewards were clearly outlined. There is no “gambling” aspect to it, and so it feels like you’re purchasing a product knowing full well what said product entails. But let me tell you: Genshin Impact’s Battle Pass is filled to the brim with shit you don’t need. It’s more a serotonin ticker than anything else: you quickly complete challenges, click three rewards, get some EXP, now you’ve leveled up — oh, a chest! What’s inside? Shite. But still, it’s a shiny chest that makes the game feel very fast-paced and gratifying.

I wish I could take my Battle Pass money back and pump it straight into Wishes. I didn’t want them originally, but now that I’ve broken the seal of spending, I’m tempted. But at the same time I feel like I’ve already wasted enough money. I ended up dropping another fiver on a limited offer that gives you 90 Primogems (just over half a Wish’s worth) per day. Why did I do that? Because now I’m in the hole with nothing to show for it, and I’m desperately trying to clamber out.

The Battle Pass is just a means of spending money you didn’t want to spend, and once you’ve spent some it becomes a case of, “Well, I’m not free-to-play anymore anyway.” My advice is to either stick to your guns and spend nothing, or if you really, really, really want to purchase something… Just open a pack or two, pray for Diluc, and call it a day. The Battle Pass is not worth the money in any conceivable way because it doesn’t offer you anything unique or worthwhile. All it really does is have you set up your credit card details so future spending becomes dangerously easy.

Read next: Genshin Impact Patch 1.1 — Everything We Know So Far