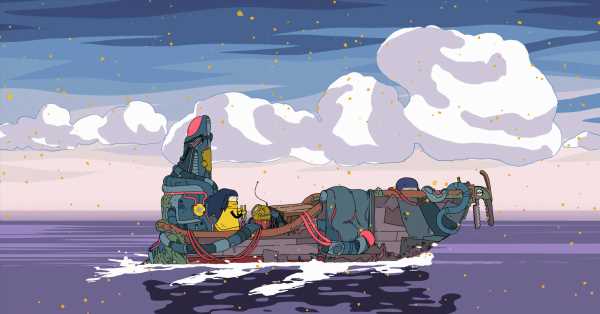 You’ve heard this story before. Though the details may be different, the thrust of the story is the same. When the world goes to shit, there’s only one person who can save us — the chosen one, through their sheer power of chosen-ness, must set off on a calamitous journey to stop whatever terrible thing is threatening the world.

It’s Link in the Legend of Zelda, Master Chief in Halo, Kratos in God of War. These sorts of heroes also appear in smaller-scale stories, in more intimate worlds, like the player-character in Cozy Grove, perpetually taking on everyone else’s needs. But being a hero can be isolating, even traumatic.

Minute of Islands, Sunday’s surprise release from German developer Studio Fizbin, is about that aspect of being a chosen one. The game’s hero is Mo, and she’s a young mechanic knighted to save her world by helping four giants that live under the planet’s crust. The game uses the trope with intention, framing it as if it’s a story you’re being told, the keyboard clicks shifting the narrative like the rustling of a book’s pages.

The story begins on a series of small islands that have long been abandoned, save for a few stragglers destined to look over the land, which has been poisoned by a toxic fungus that’s killing and consuming anything that lives. One of these stragglers is Mo, the childlike mechanic who’s been tasked with looking over the massive, grotesque, humanlike creatures that live underground in deep, mechanical labyrinths. These creatures once lived above ground, thriving amongst humans, but were forced — by duty — underground to power a system that purifies the air so that humans can breathe. But those rapidly aging systems often break. Mo, the story says, wielding a tool called the Omni Switch, is the only person who can fix these creatures and preserve the doomed land. And in doing so, she’s saving her family, too, who’ve stuck around the place so as to not abandon Mo.

Minute of Islands’ hero’s journey serves a clear purpose. Studio Fizbin is not necessarily subverting the trope, but rethinking what it means to be a hero, and to whom. The islands are places familiar to Mo, places she grew up and spent her youth: her childhood home, her uncle’s abandoned theme park, a once-bustling lighthouse. Mo explores these places through light 2D platforming studded by simple movement puzzles — placing objects to unobscure a path, turning wheels to unlock a gate. Throughout her journey, Mo collects memories of these places, of the time before the fungus took over the world. She passes bloodied seagulls and decomposing whales, rusted metal and rotting wood, in her journey to fix the air purification system powered by giants. She climbs between worlds, the fungus-infested topside and the fleshy undersides where the giants live, resetting the systems one by one — and in doing so, exposing herself to the toxic fungus.

Through the game’s narration, the player gets a peek into Mo’s internal dialogue — and as the game goes on, we see the effects of her “destiny,” being the only one who can save the islands. Mo pushes her family away — people who are clearly worried about her — and succumbs to the pressure of being the chosen one. The descent is slow but painful to participate in, as Mo creates rifts with her uncle, sister, friends, and grandmother. Throughout it all, Mo still performs little rituals to keep herself calm, but the narrative arc is clear: The mission to protect these lands is devastating Mo and her family.

The darkness of Minute of Islands is punctuated by its light and airy art style; it’s a colorful, cartoon world that, from afar, looks like a place I’d love to live in. The platforming and puzzles are simple and satisfying. But examining the details uncovers a darker truth, from those bloodied birds and violent-yet-beautiful fungus. The visual design makes the game light even in the moments where Mo is at her darkest, the narrated voice inside her head turning bitter and spiteful.

Still, Mo always has her happier memories to come back to. Finding objects and spaces that trigger Mo’s memories — a button literally suggests the player “remember” — creates moments that are small yet impactful. You can complete the game without collecting these, but they’re essential in creating the light to Mo’s darkness, and it’s these memories that ultimately become her lifeline over the six-or-so hours it takes to complete the game. When Mo remembers the times she spent admiring the island air before the calamity, it grounds her in what matters. In her constant rush to save the island, she can spend only a minute this day, taking in her surroundings with her grandmother.

It’s Mo’s grandmother who urges Mo to go to a place she has always feared. The place, it turns out, is not anywhere near as repulsive as the intricate musculature of the underground caves, or the harsh reality of the island being killed by fungus. Instead, it’s beautiful; the full scope of Minute of Islands’ colors are on full display, with intricate, marvelous mushrooms growing out of what was once flesh and spore. But this is also a place Mo can only enter without the comfort of her Omni Switch. Her fear, it seems, is not tied to the monstrous, but instead, to vulnerability.

It can be easier, sometimes, to close yourself off, shielded by a dangerous sense of strength and resilience, rather than letting yourself be emotionally vulnerable. This is the aspect of the hero’s journey that Minute of Islands pushes back against. Is this what Mo is truly destined to do? Is she really the only person who can save this world, and does she need to? What would happen if she asked for help?

Minute of Islands was released June 13 on Nintendo Switch, PlayStation 4, PlayStation 5, and Windows PC. (An Xbox version will be released “soon after.”) The game was reviewed using a Windows PC download code provided by publisher Mixtvision Games. Vox Media has affiliate partnerships. These do not influence editorial content, though Vox Media may earn commissions for products purchased via affiliate links. You can find additional information about Polygon’s ethics policy here.