“A single success is often built upon countless failures” is hard to conceptualize in real life, but is obvious in the world of a video game. Numerous botched attempts through a stage can lead to the knowledge (or just simply precognition) required for survival. Most games are built upon this cycle, but few call attention to it. And for good reason. Acknowledging failure would spoil tension in a game’s story. What threat is a band of pirates to Nathan Drake if he’s immortal?

Katana Zero is a game about this cycle, weaving the notion that “mastery that comes from defeat” into a gory tale of revenge and redemption.

Developed by Askiisoft, Katana Zero is a 2D side-scrolling action game in a dingy, neon-burnt metropolis. Players take on the role of Zero, an amnesiac samurai assassin tasked with killing anyone he’s told to kill. He’s been treated with an experimental drug called Chronos, granting him a unique perception of time. In practice, this means bullet time and infinite lives. He doesn’t fail missions so much as he repeats them, rewinding time until each attack breaks in his favor.

Zero glides through stages with grace. He can dodge roll through shields and deflect bullets with a well-timed slice. The bullet time proves helpful as most stages require stringing together a handful of these maneuvers without taking a single hit.

The gameplay itself is well-executed but can’t quite live up to the presentational highs in Katana Zero. Combat sequences feel limited by a small number of variables, from enemy types to environments to interactive elements. The challenge increases in later levels, but generally this manifests as more enemies to kill or fewer projectiles to use. It begins to feel less like an open-ended action game with infinite possibilities and more like a puzzle game with just one or two ways of making it through each room. 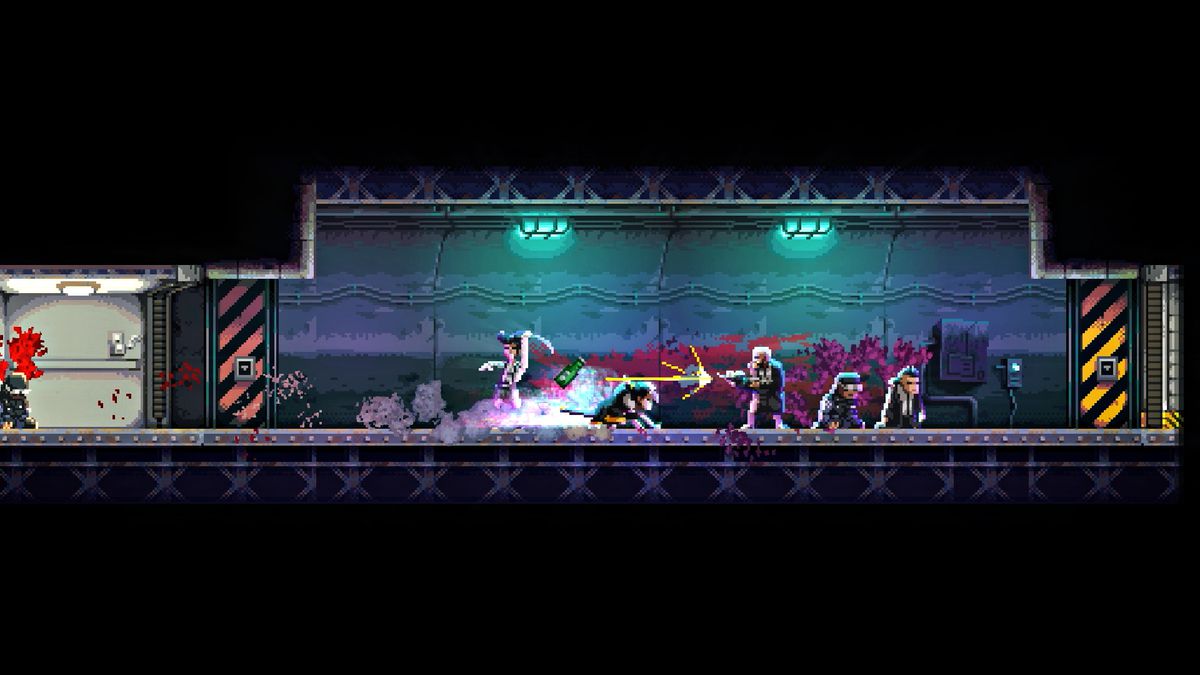 For all the gameplay’s limitations, the repetitive nature aligns well with the themes. Even small encounters with two or three enemies may require a half-dozen attempts before getting it exactly right. And there is that feeling of satisfaction I get when perfectly executing a scenario. But many times these scenarios feel inevitable and brute-forceable as my muscle memory kicks in for the 20th replay.

These are well-worn game mechanics, but Katana Zero shrewdly builds its story around them to give them weight. Despite its professional benefits, Chronos takes a brutal toll on its addicts. Zero lives alone in a shitty studio apartment. He kills out of necessity. The only way to get more Chronos is to continue working for his supplier. Going cold turkey means a terrible fate: Perception of time stops, with every second stretching into infinity.

The narrative gradually unpacks this dreadful choice: endless violent repetition or infinite oblivion. Interactive moments between levels offer me some control of the shape of the journey. Dialog options provide more insight into Zero’s plight. When a therapist interviews me, I can press for more information about the drugs he administers or I can clam up and seeth. In another scene I decide to be nice to the little girl who lives next to me, cooking her dinner (a packet of protein paste, regrettably). The main story isn’t really altered by my choices (barring a couple quirky exceptions) but they options enrich my connection with Zero and the price he pays for immortality.

The narrative scenes take place in the same 2D platformer worlds, but they’re meticulously animated. Despite the low-fi, 16-bit style of the artwork, subtle details like an eyebrow raise or a head nod come through clearly. This makes the interactive elements of the story feel impactful (even when they aren’t). They accompany a slick synth score, alternating between thumping action scenes and ambient vibrations for the story-heavy dialogues.

This is not an uplifting world. There are times when the dark tone and themes in Katana Zero can overwhelm the experience. I could live without seeing two addicts get brutally murdered next to Zero’s apartment. And without much gameplay variance, it’s sometimes hard to motivate myself through all the gloom.

But for all its narrative grimness and all of its slimy settings and all of its repetition, I enjoy Katana Zero’s flair. Dark clubs blink with neon color, pulsing music echoes through each scenario, and characters move with a beautiful fluidity. I don’t expect that from a game of this style. It’s a cynical and sometimes ugly story told with unusual warmth and sincerity.