Magic: The Gathering, the original collectible card game, is gearing up for an epic showdown. A massive narrative arc will soon come to a close with the publication of a new novel. Its release will coincide with the launch of War of the Spark, the game’s 81st set of cards. Nic Kelman, the head of story and entertainment at Wizards of the Coast (WotC), says that this is a climax that will change the game’s multiverse forever.

Recently, Kelman sat down with Polygon to share the details of a brand-new product, a so-called Signature Spellbook, and to pore over the details of a moment years in the making. He says that in the coming days, a fan-favorite character will die. He also indicated that, unlike in some other fictional universes, this character won’t be coming back.

[Warning: This article contains major spoilers for the storyline of Magic: The Gathering.]

The upcoming novel is called War of the Spark: Ravnica and is written by Greg Weisman (Gargoyles, Star Wars Rebels). It tells the story of a battle between the evil Nicol Bolas, the youngest and most powerful of Magic’s seven Elder Dragons, and the Gatewatch, a loose alliance of Planeswalkers fighting on the side of good.

The setting for the battle is the plane of Ravnica, one of the most populous realms in the Magic multiverse and the location for the game’s most recent sets of cards. Bolas isn’t alone. He’s brought with him many other powerful Planeswalkers to aid him in his struggle for control. In total, Kelman says the novel will feature more than 120 named characters from throughout the franchise’s 25-year history.

And, in that battle’s final moments, one of those characters will sacrifice himself for the greater good. 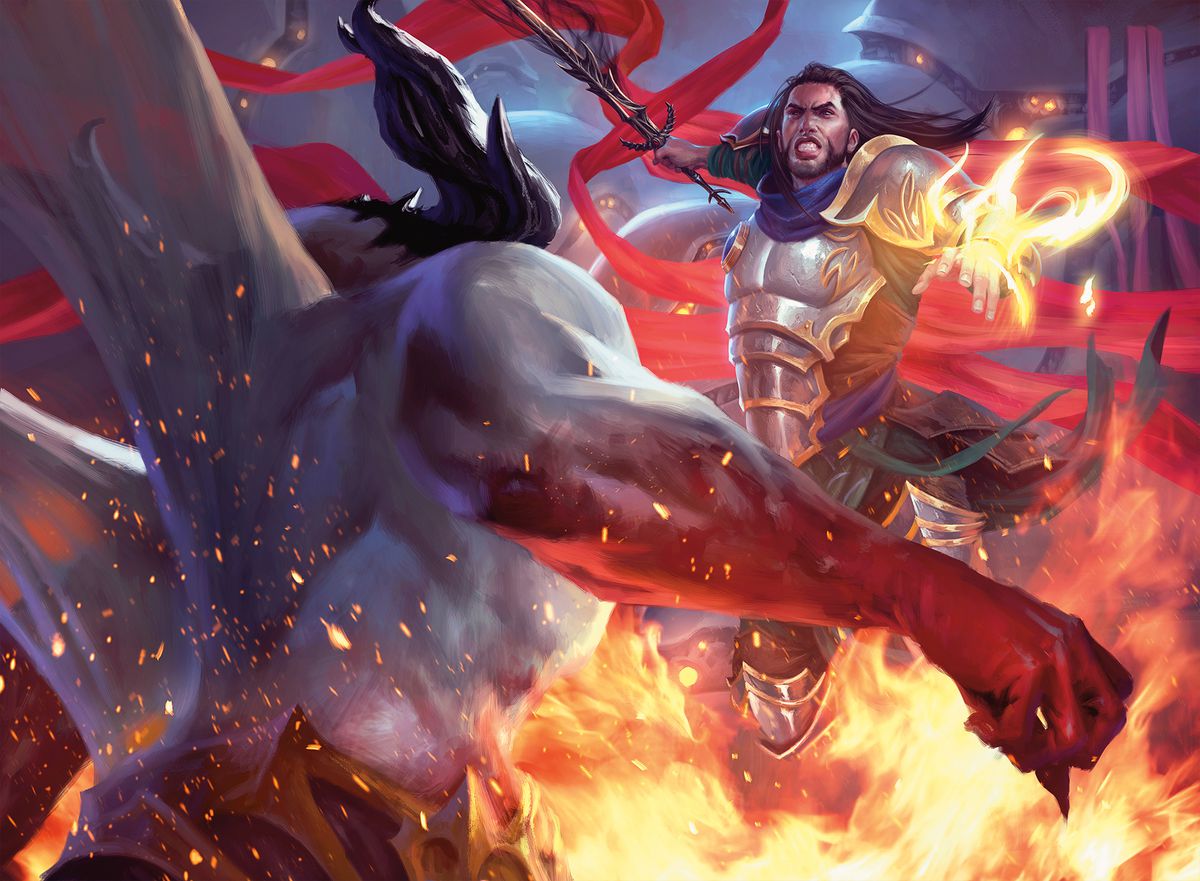 Gideon first appeared in the Zendikar block of cards, where he showed up as a Planeswalker in 2010’s the Rise of the Eldrazi set. His powers have traditionally been drawn from white mana, long associated with order and justice. Kelman says that, as far as Magic’s ongoing narrative is concerned, Gideon has been “the point around which the other Planeswalkers of the Gatewatch rallied.”

“People know that multiple characters are going to die [in this novel],” Kelman continued. “They just don’t know who. Gideon, we think, will have by far the biggest impact. He’s certainly the most pivotal death in the story.”

To celebrate Gideon’s life, WotC is issuing a special set of reprinted cards called a Signature Spellbook. It’s only the second time in the history of the franchise that the publisher has done so. Gideon’s Signature Spellbook consists of eight cards pulled from the long history of Magic, and seven of them contain entirely new art.

Polygon spoke with Gavin Verhey, a former professional Magic player and now a designer at WotC, to discuss the importance of each of these cards and give insight on how fans will be able to use them in their decks. 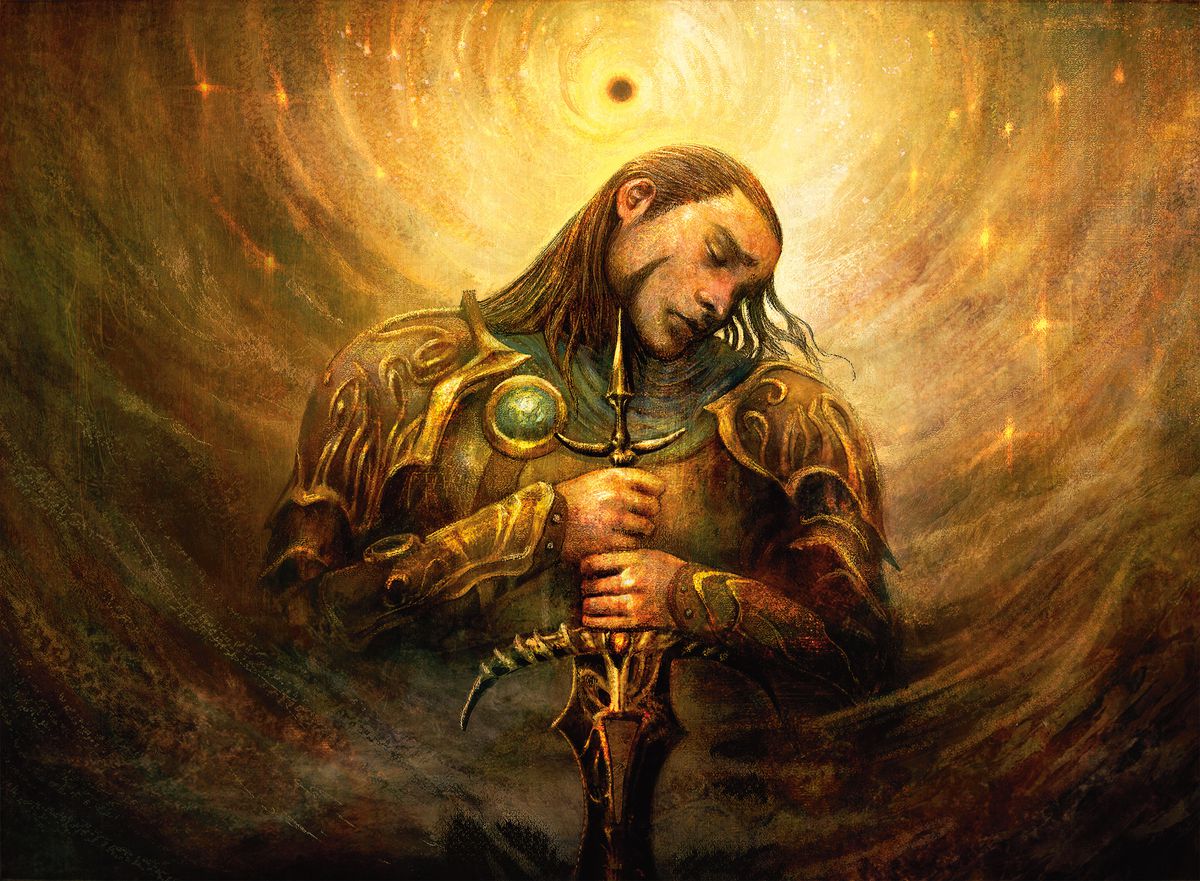 Seb McKinnon/Wizards of the Coast

“This is a white Commander staple,” Verhey said, referring to the dynamic format of Magic that includes decks of 100 cards, all of which are unique, and allows up to six players at one time. “Anytime something that you have dies, all of your opponents sacrifice something. This is huge because, in Commander, you’re playing this big multiplayer game. There’s a lot of destruction rolling around. A lot of people will try and attack you. The card simultaneously says, ‘Don’t attack me.’ It also says, ‘Don’t mess with my stuff.’”

Next up is a card that can be played at any time, an instant spell called Path to Exile. With it players can effectively remove any target creature from the game. The only cost is a single white mana — and allowing your opponent to bring a new land into the game.

“This is, simply put, one of the best white removal spells ever printed in the entirety of Magic’s history,” Verhey said.

Rest in Peace is the set’s second enchantment, and perhaps its most powerful one. It was first printed with the Return to Ravnica set in 2012. 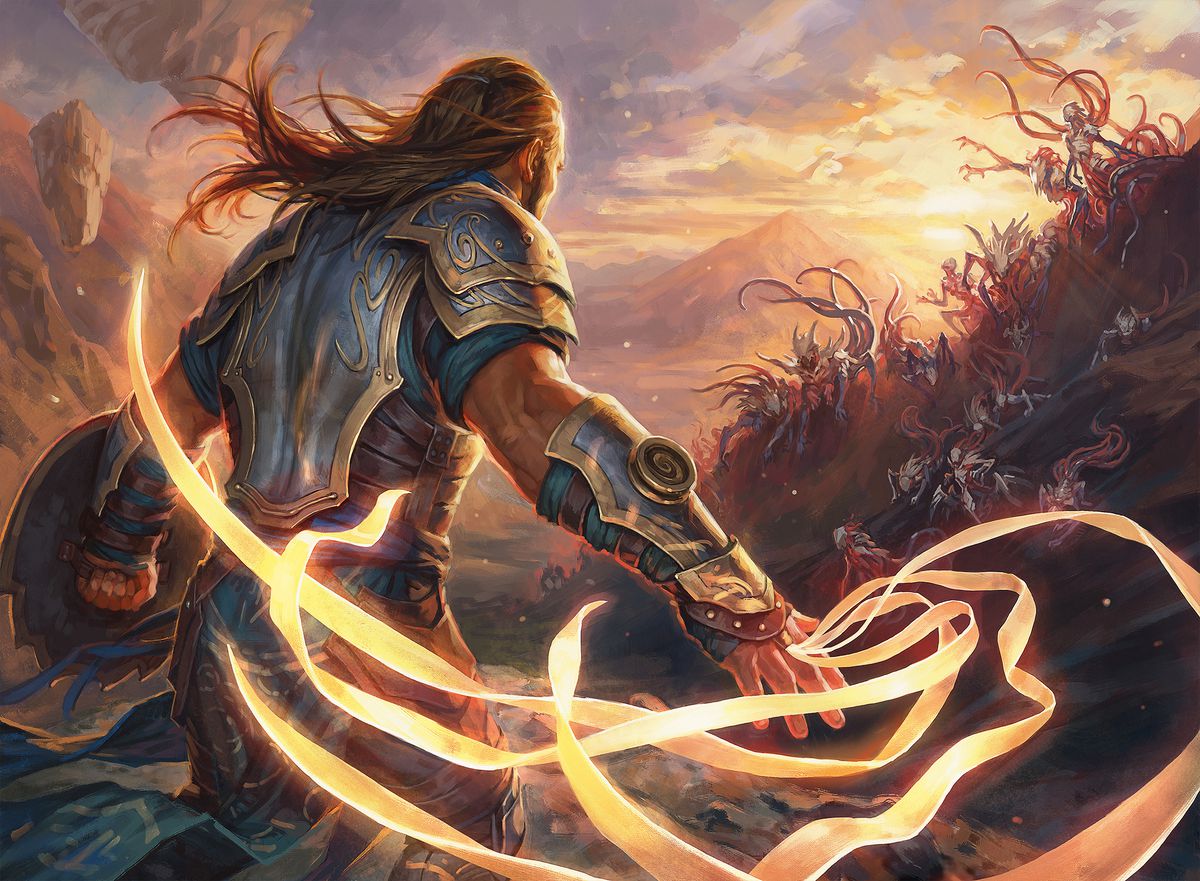 Ekaterina Burmak/Wizards of the Coast

“This is what we call a hammer card,” Verhey said. “If your partner’s playing a graveyard strategy, you play Rest in Peace and it just shuts them down. It gets rid of all the cards in their graveyard, and it gets rid of all future cards in all graveyards. So it’s interesting to play in a number of different contexts.”

Next up is an aura-type enchantment called Shielded by Faith. It allows players to transfer the indestructible keyword to any new creature that they field. That means once the aura is in play, players can be relatively assured that at least one of their most expensive creatures will be able to stand up against most anything their opponent can throw at them.

Shielded by Faith pairs well with the next card in the set, True Conviction. Its lifelink ability allows players to earn life for any damage their creatures mete out. Combined with double strike, which allows creatures to attack twice, it’s an easy way to boost yourself to extremely high life totals.

Played at just the right time, it’s possible to reach 100 or more in the blink of an eye using True Conviction, according to Verhey. 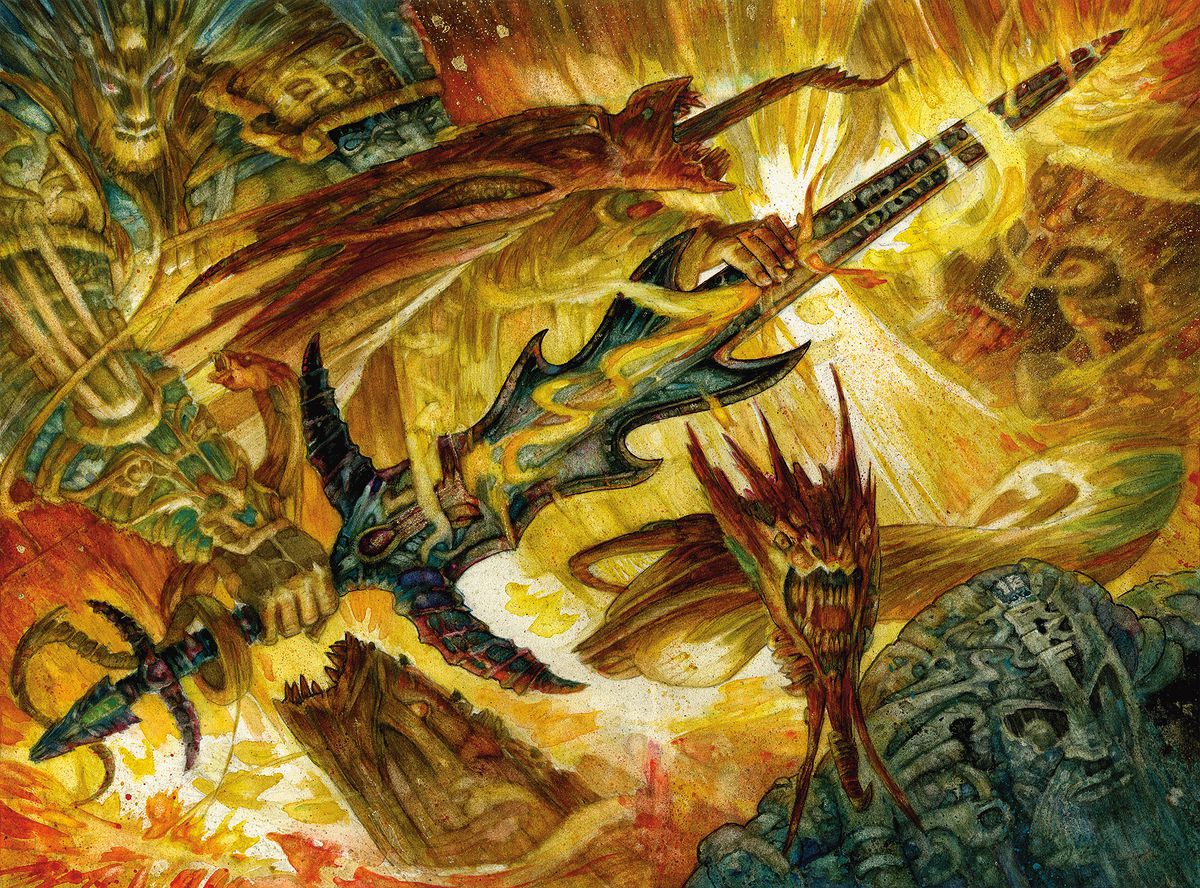 Ekaterina Burmak/Wizards of the Coast

Worship, the next element of the deck, is another card that’s very difficult to counter. Once in play, so long as its owner has at least one creature they control, any damage that would bring them below 1 life brings them back to 1 life instead. Combined with a card like Shielded by Faith, which provides the indestructible keyword, it can be very difficult to counter.

“This is a card that, if your opponent puts it down, you start getting a little concerned,” Verhey said. “It’s so easy to set up a lock where you opponent can’t really kill you off anymore.”

The final card in the set is a legendary artifact, a newer piece of equipment known as the Blackblade Reforged. Inexpensive to summon onto the battlefield, it only costs an additional 3 mana to equip it to a legendary creature. Once in play, it gives that creature +1/+1 for each land that the player controls. 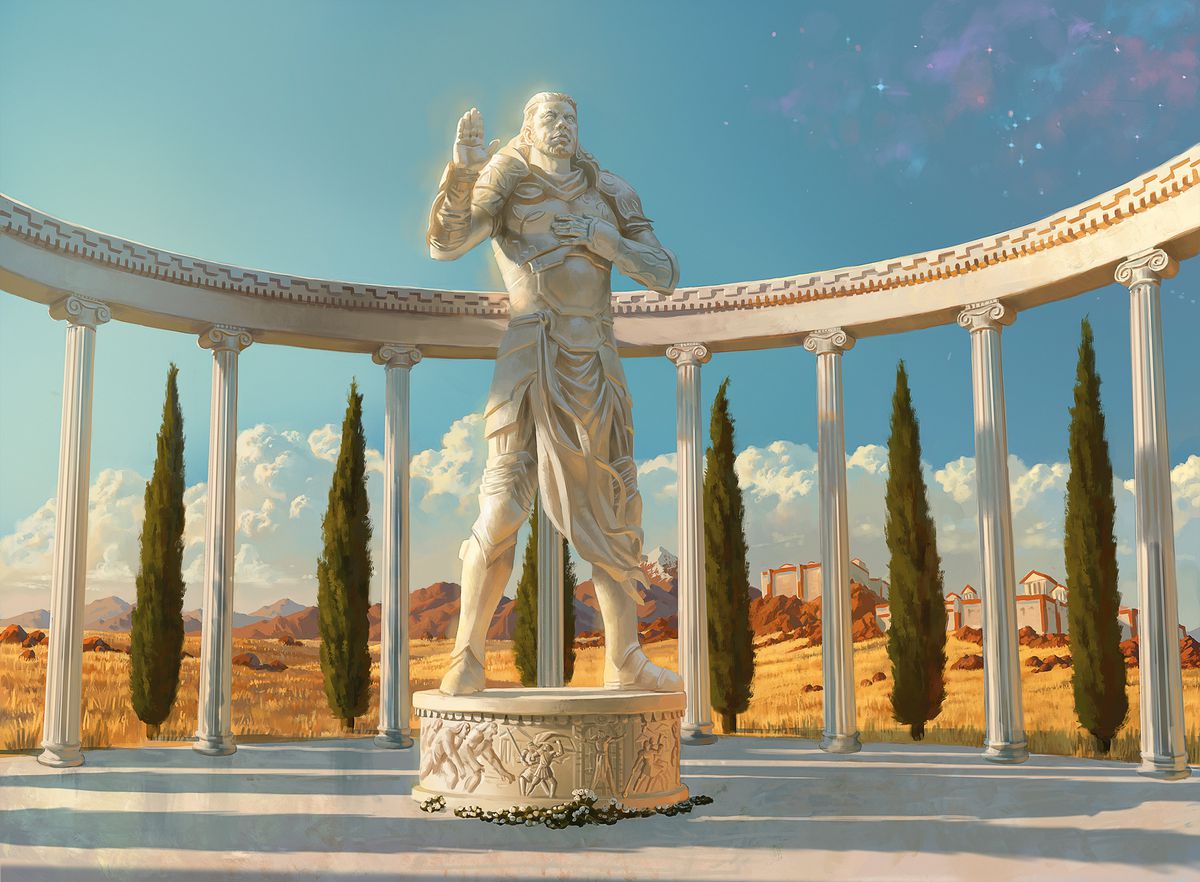 Jason Rainville/Wizards of the Coast

The card itself is already part of the Dominaria set, which was released just last year. The real treasure here, Verhey explained, is the artwork itself. The mystical, soul-drinking weapon has been a mainstay of the Magic lore for years now. It was only recently reforged, only to be carried into battle by Gideon himself. For this rendering, WotC called on Richard Kane Ferguson, the artist who originally created its iconic look.

Nic Kelman, head of story and entertainment at Wizards of the Coast, takes no pleasure in killing off one of Magic’s most beloved characters. For him, the real joy comes in completing an epic storyline that will bring the most popular CCG in the world forward into the second half of its third decade.

“This storyline, this conclusion, the story arc — and specifically, the War of the Spark conclusion — was kind of architected years ago, before I even got here,” Kelman said. “For me, for certain pieces, it’s been more making sure that we follow through on the execution as well as possible.”

He also acknowledges that 2019 marks not one but two other climactic battles in popular fiction, both in the Marvel and the Star Wars cinematic universes. WotC’s goal, as in all things, is to make sure that its characters and its storylines stand apart.

“This was actually mapped out before anybody even know there was going to be an Infinity War, let alone the conclusion of the second part of it, at almost the same time,” Kelman said. “It is an epic battle with lots of characters, but that’s kind of where the similarity ends. […] I think the key difference is probably that in comics or in films […] it’s unusual for death to have real stakes. I will say that we consider ourselves more in the fantasy literature tradition. If a character dies, they’re probably dead, as opposed to the comic or an epic film.”

Gideon’s Signature Spellbook will go on sale soon. The War of the Spark card set goes on sale in the digital version of the game, Magic: The Gathering — Arena, on April 25. Physical cards will arrive in stores and on Amazon on April 27.

Correction: This story originally said that the card Rest in Peace would be legal for Standard play. That is not the case. We have adjusted the article to reflect that.