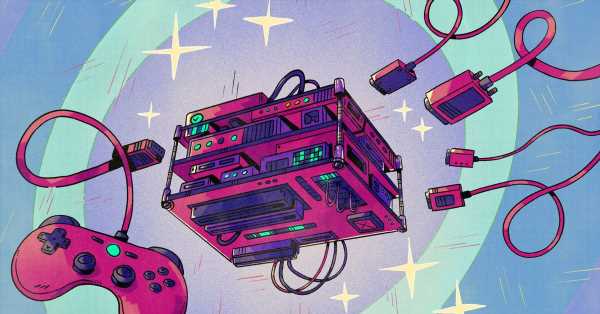 I’ve gotten a reputation around here as something of a proselytizer when it comes to the MiSTer project. And though my colleagues no longer answer their doors when they see me knocking, you, my dear reader, clicked on this story voluntarily! And I’m glad you did, so I can share this definitely-not-a-pamphlet explainer with you about why MiSTer is so exciting and why I think, maybe, you will find it exciting too!

What is a MiSTer and do I have to type it that way?

MiSTer is an open-source project designed to recreate the functionality of classic PCs, arcade games, and consoles as accurately as possible. To do this, MiSTers use FPGA (field-programmable gate array) technology. While most processors have a fixed architecture, FPGAs are designed to be reconfigured to clone whatever old gaming hardware they’re programmed to. If you’re familiar with Analogue’s Super NT and Mega SG clone consoles (which are designed to play 16-bit Nintendo and Sega games accurately) , then you’ve got the idea.

And you can type it however you’d like! The capitalization conceit, and the title itself, comes from an older FPGA-based project called MiST that was designed to run retro computers like the Amiga and Atari ST. So that’s aMiga and Atari ST.

The MiSTer project picks up from that earlier project, but is built around a more powerful, readily available development kit with an FPGA — plus HDMI, USB, microSD, and more — at its core. Because it’s built on a standard, commercially available base, it’s expandable in lots of interesting, open-source ways. This is where a lot of the confusion and complexity, but also the fun and excitement, of the MiSTer project comes from. It’s a retro gaming platform you assemble yourself, but one that continues to evolve thanks to a dedicated community of brilliant hobbyists.

Stock photo of the DE10-Nano development board, the heart of any MiSTer build.
Intel / Terasic

Why can’t I just use a software emulator to run roms? Why is the MiSTer better?

This is one of the most controversial topics in the retro gaming community. How is an FPGA-based solution different from a software emulator? Is it better? You’ll often see a hesitation to use the word “emulator” when talking about FPGA platforms. But just because some software emulators are bad, doesn’t mean all software emulators are bad or that emulation itself is bad. The MiSTer is an emulation machine, and one that’s focused quite specifically — you might even say obsessively — on accuracy.

But I’ve always found the number of options within software emulators to be … off-putting. The MiSTer is a refreshingly simple machine. It almost feels like an appliance. There’s a simple interface, available both in-game and before you load a core. You select a core, which configures the FPGA to emulate your chosen hardware, and from there you load up a game to play. There are settings, to be sure, but they’re easy to ignore unless you want to go deep. And you know you’ll get an authentic experience without having to make any tweaks. Finally you can relive your glory days of Prince of Persia on the Apple II, or Puzzle Bobble on the Neo Geo.

Ok, I’m interested. How do I build one? Can’t I just buy it somewhere?

Oh good, I’m so excited for you. So, the absolute easiest way to get started is to buy a pre-assembled unit from a reputable shop. In the US, both MiSTer Addons and Zerohimself are frequently cited (I have purchased a handful of components from MiSTer Addons myself). For Europeans, Ultimate MiSTer in Portugal is frequently cited. The official MiSTer forums has a list of shops and you can get a sense of their quality from the threads. A pre-built unit is going to get you the SDRAM upgrade, an IO board, a USB hub, and maybe a case, with prices starting around $370 and up, depending on options. That $370 will get you access to everything the MiSTer can run today, with extra money going towards a case (like this passively cooled aluminum case) or other upgrades, like a power switch or a Wi-Fi dongle or controllers.

But if you want to go the DIY route, first you’ll need a DE10-Nano, which you can get for around $170. You can get one from one of the above shops, or direct from places like Digikey and Mouser. While much of the addons are optional, to get the broadest compatibility (read: Neo Geo, for example) you’ll want to start with the 128MB SDRAM, which you can get for around $60.Then all you need is an SD card loaded with the MiSTer software — I recommend using the Mr. Fusion installation method — adding the Update_All_MiSTer script to your SD card, hooking the DE10-Nano up to an ethernet port, and running that script. Now you have a fully up-to-date MiSTer.

Do I need the IO board? What about the USB hub? How about Wi-Fi? I just want to play some games!

You don’t need the IO board if you aren’t planning on using the analog output for a CRT display. There is a digital IO board, which includes the fan, a digital audio output, but can’t output to a CRT simultaneously. If you only want CRT output, you can use the DE10-Nano’s HDMI port and a cheap adapter to get 240p video out to a CRT with minimal lag. Just a note: Make sure to get an adapter with a compatible chipset!

As for the USB hub, any USB hub will work, though a powered hub is necessary for using a Wi-Fi or Bluetooth adapter. A USB hub designed for the MiSTer will sit nicely under the DE10-Nano, and give you seven ports to work with. The proprietor of MiSTer Addons made an exhaustive spreadsheet with latency measurements for literally hundreds of controllers. You can even use classic controllers with a low-latency USB adapter like the open-source Daemonbite adapters.

If you don’t have an ethernet cable nearby, you’re going to want a Wi-Fi adapter. It’s simply the easiest way to keep your MiSTer up to date (and with Samba file sharing, it’s super simple to drop files individually onto the SD card as well). There is a list of compatible adapters here, though it doesn’t include the model I’ve been using for the past 18 months.

Speaking of games, which consoles and/or computers does the MiSTer currently support?

There are … a lot of consoles that the MiSTer can handle. For consoles, you’re really well represented up through the fourth generation (or the so-called 16-bit era), though cores for the Sega Saturn and Sony PlayStation are currently in development. You can get a sense of the full list of arcade cores here, and the rest of the cores are listed on the right rail.

You’ll also have access to dozens of arcade cores, including the full Capcom CPS1 and CPS2 libraries. There are scores of classic computing platforms, including many that I’ve never heard of, and lots of familiar ones like 486, Atari ST, Apple II+, Sharp X68000, ZX Spectrum and more.

What about the games? Since there’s no cartridge port, ummm …

This is where things get a little dicey. Unlike the Analogue consoles, which include cartridge ports for a totally plug-and-play experience, the MiSTer requires you to bring your own ROMs. Maybe you’ve already ripped your carts or your disc-based games, or you could acquire something like the Retrode 2 to dump your carts now.

Maybe you find it ethically acceptable to download ROMs for games you own in other formats. I don’t personally own any Neo Geo cartridges, but I do have a large collection of games purchased from GoG.com and, conveniently, the MiSTer core can use the files inside the GoG and Humble releases of some Neo Geo games.

How you acquire the ROMs to play on the MiSTer is up to you and your relative comfort, but there are legal ways to get your collection into the MiSTer if you’re not comfortable downloading whatever Google turns up for you.

Where should I stay informed on the MiSTer project?

One of the exciting things about the MiSTer project is seeing what the community comes up with every week. As an old person, it reminds me of the earlier days of MAME, when new arcade games were being added constantly. This list is by no means exhaustive, but this is where I mostly find out what’s happening.

There’s so much more to discuss, but I’ve already kept you and I don’t want to be a bother. But if you have more questions, or just want to talk about Golden Axe — which Jotego just released to his backers on Friday — I’ll be in the comments section below.