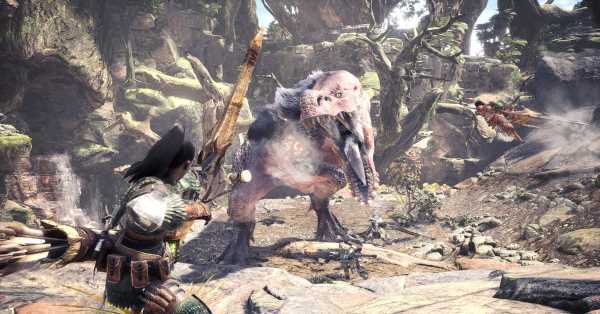 Monster Hunter is a series all about hunting monsters — a given, one might think. And the series doesn’t usually dwell on the morality of the hunter’s actions. There’s a monster, I’m a hunter, and combat is our natural relationship.

Monster Hunter releases are also games of two parts: the hunt and the hub. The hunt is the meat of the gameplay; when you’re hunting, killing or capturing a giant monster. The hub is the chill, preparatory aspect of Monster Hunter, where I use various monster parts to make new gear and prepare for the next hunt. My actions on the hunt don’t follow me past the gates of Kamura Village in Monster Hunter Rise. But Monster Hunter: World included a minor feature that forced me to reconcile my actions in both sections of the game: the capture pallet.

The capture pallet kept the monster at the front of my mind even after the hunt in Monster Hunter: World, and it’s a feature I miss in the otherwise fabulous Monster Hunter Rise.

Killing a monster in Monster Hunter — both Rise and World — is (relatively) easy, I just keep hitting it with my weapon until it’s dead. Capturing a monster, on the other hand, is a bit more complex.

I first need to fight the monster until it’s weak, panting, and maybe even limping back to its den. Then I need to craft and place a trap to ensnare it. Once I’ve trapped the monster, I need to throw sleep bombs at it until the monster passes out completely, immobile and exhausted. And that means it’s coming with me.

To the left of the gates in Astera, the main city in World, there’s a massive pallet off to the side, out of the play area. I can’t walk up to it or interact with it, but I can see it. And when I capture a monster, that monster will be sleeping on the pallet the next time I come to town. Monster Hunter: World doesn’t call this out, and it’s not in an obvious place. But seeing the waiting monster was a small touch I noticed a few hours into my time with World, and it gave me a new perspective on my actions.

These monsters are “living” creatures, and they’re only scary because I’m trying to kill them. That secondary visual connection to my actions is missing completely in Rise.

Why I miss the monster pallet so much

The Monster Hunter World capture pallet in all its splendor
Image: Capcom via Reddit user Sakurami

I see these monsters during my hunts all the time, so why is it such a big deal for me to see them in town? What’s the difference?

Usually the hunting and town aspects of the game are separate, and the only time I ever interact with a monster in the hub is by turning their once-majestic body parts into a powerful new hammer so I can beat their cousin to death.

But seeing the creature lying there in World, resting like cattle waiting for slaughter, helped connect the two halves. The beast is actually linked to the crafting I’m about to do, and not some digital enemy that ceased to exist the second I hit the loading screen on my way back to Astera.

Perhaps more importantly, I feel sympathy for that resting monster. I try not to think about hunting these animals as I’m out there doing battle with them. They don’t know why I’m there, and they’re not usually doing anything wrong. They’re living their lives.

But I want their horns, their tails, or their claws, and so they have to die. It’s easy to forget that I’m the aggressor when they’re trying to kill me. But seeing the monster “resting,” drugged, and at the whim of dozens of my fellow townspeople gives that interaction a more melancholy tone. Does this creature deserve its death? It’s an easy question to ask when it looks so helpless.

Missing the pallet feels like a silly complaint, but it’s something from World that I appreciate not for a gameplay reason, but because it drew my attention to a part of the world I often neglect — or even purposefully try not to think about. For just a moment, as I’m running by, doing errands before my next hunt, the capture pallet helped transform what was once an enemy into what feels like a living, breathing thing that’s part of a larger world.