At the risk of exhausting myself by refuting claims made by gamers this week, I once again have to dispel some baseless rhetoric I’ve seen floating around the comment section on Twitter, Facebook, and Reddit. No, CD Projekt Red was not “forced” to release Cyberpunk 2077 too early because gamers were big mad. The chosen release date was 100% a business decision, period.

There’s this dumb meme I’ve seen everywhere this weekend. It’s Senior and Junior from Orange County Choppers and it’s used in the traditional format that the meme is known for: Senior repeatedly demands something from Junior, but when he gets it, he’s still angry. In this case, Senior is the all the gamers demanding Cyberpunk while Junior is CDPR, telling them it’s not ready. When the gamers get the game, they’re angry that it’s buggy and unfinished, even though CDPR told them it was going to be. 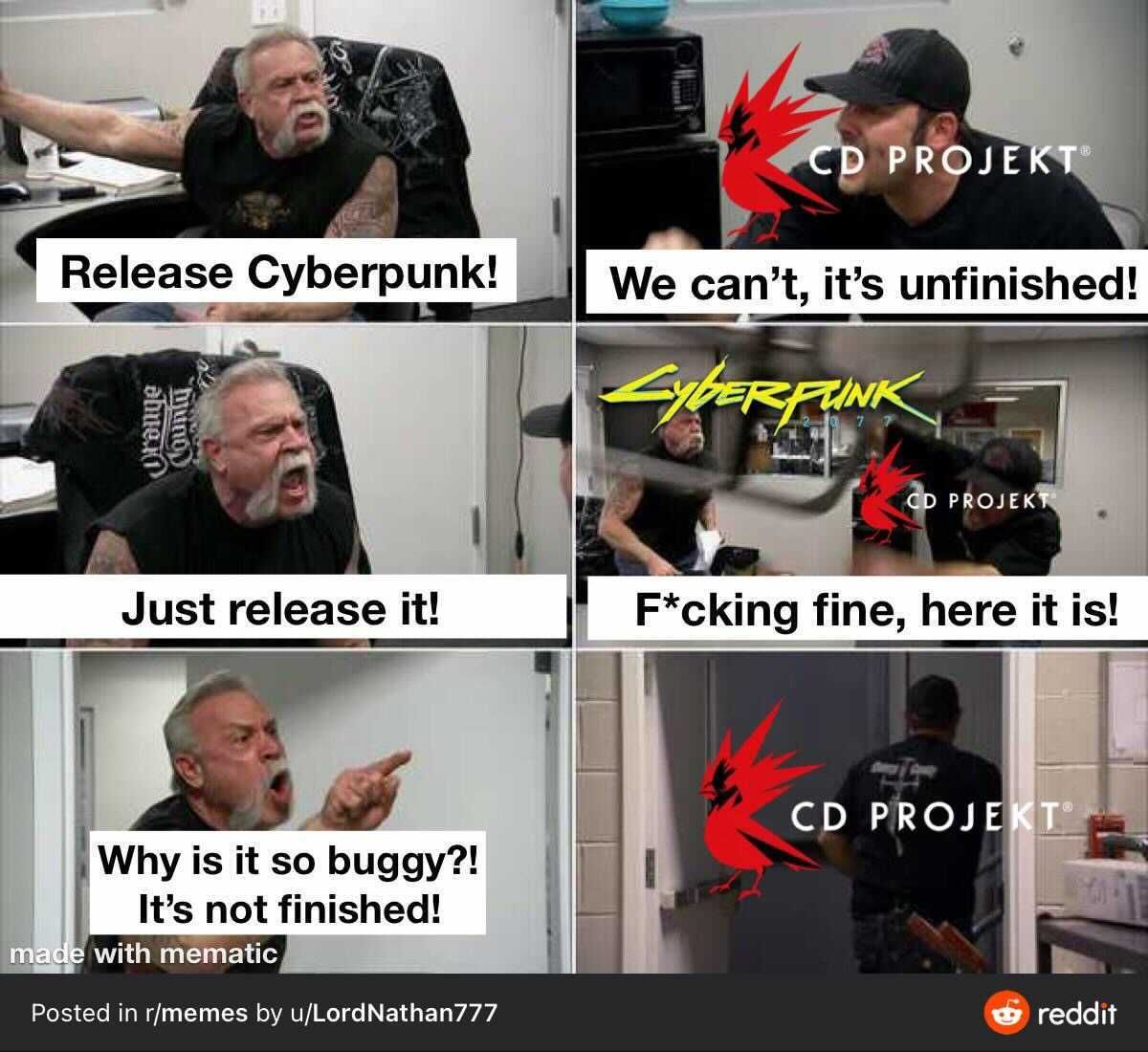 This meme is stupid as hell. Loads of people were disappointed when Cyberpunk 2077 got delayed, then delayed again, then delayed AGAIN this year, of course. But this weird alternate reality where CDPR didn’t want to release the game yet but somehow we made them even though they warned us it wasn’t ready? Absolute nonsense. CDPR made the decision to release the game, not because fans demanded it, but because it was financially necessary. What’s more, the company assured us it was ready.

I wouldn’t be making a fuss about a clueless meme, but apparently, the diehard Cyberpunk defenders saw the meme and decided it was a sacred text because I’ve seen the same “CDPR was forced to release the game before it was ready” BS all over the internet.

Two weeks before launch, CD Projekt joint-CEO Adam Kaciński told investors that base PS4 and Xbox One performance was “surprisingly good, I would say, for such a huge world.” Obviously, we now know that this isn’t the case. Perhaps you can forgive Adam for lying to investors 17 days ago, but there’s no way anyone can argue that CDPR warned us that the game isn’t ready yet, quite the contrary.

I can’t speak to the specifics of CDPR’s financial situation, and I’m certainly not suggesting it was in a desperate need of cash or anything like that, — especially given the continued strength of Witcher 3 sales. What I can say without a shadow of a doubt is that CDPR decided it was better to release Cyberpunk 2077 now and deal with the fallout rather than delay the game into next year.

Cyberpunk 2077 was going to sell like gangbusters whether it released in April, December, or even six months from now. There is no universe in which customers get so fed up with waiting for the game that they decide not to buy it at all. I know that the delays made a lot of people very upset, and I know that some of those people harassed developers online about it and even sent death threats. That behavior is deplorable and those people should be held accountable, but Cyberpunk was not released too early for the sake of appeasing angry gamers, that just simply isn’t true. Cyberpunk 2077 was released too early because it was deemed the best financial decision for CDPR and its investors.

READ NEXT: The Most Impressive Thing About Cyberpunk 2077 Is Its Guitarists