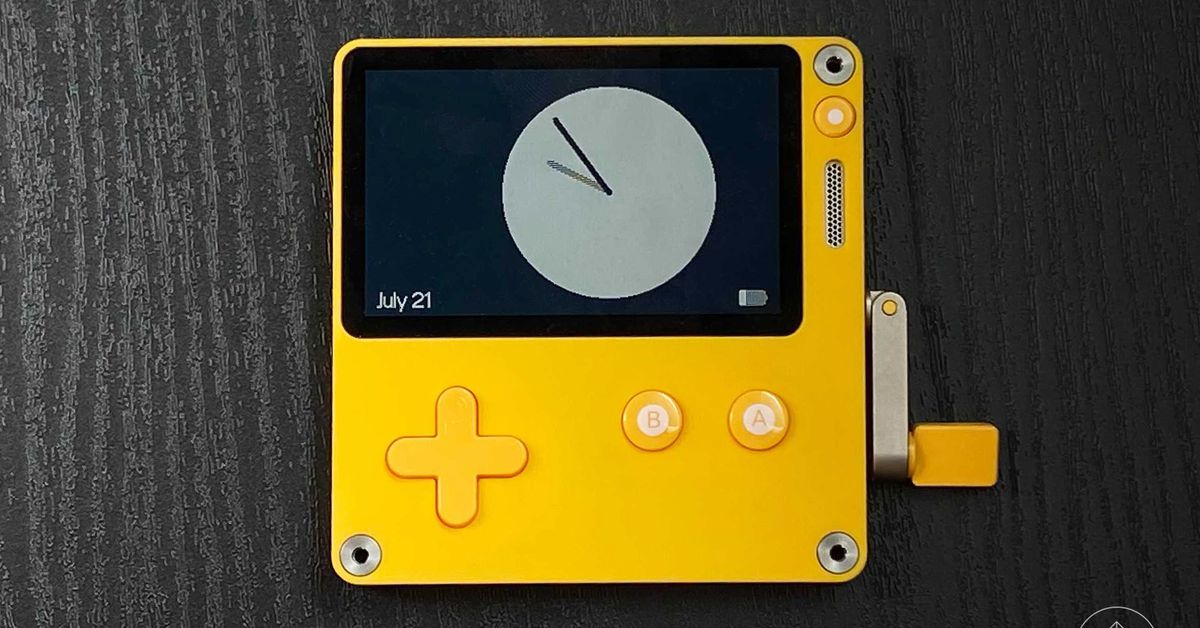 The Playdate isn’t the future of portable video games. Not that it wants to be.

Considering that we can run Crysis on electric cars and stream Minecraft on smart refrigerators, the Playdate is unapologetically, pleasantly, and occasionally frustratingly old-fashioned. It looks like the Game Boy, only smaller and thinner and school-bus yellow. It lacks a backlight for its screen, let alone the table stakes of modern video games like online multiplayer and achievements.

Rather than chase what’s next, the Playdate echoes and amplifies all the quirks of portable games in the early 1990s, when playing video games on the go meant lots of little compromises that would infuriate most folks raised on the many conveniences of the Nintendo Switch.

To misquote the tagline of a dead website that similarly sought to imitate the glory days of a lost time: “It’s not for everyone. But maybe it’s for you.”

What is the Playdate and how does it work?

After a couple of weeks with the device, I’m still not sure when I’d prefer to play the Playdate instead of my other options, though I’m charmed enough by its potential to watch its creators and its audience make sense of this little oddity.

It sits in your hands like a boutique toy, a sturdy slab of plastic, metal, and electronics, a little smaller than a Polaroid picture and about as thick as a pencil. Like the Game Boy, it only has two main buttons, a directional pad, and a monochrome screen. As I said, there’s no backlight, so be prepared to go outside or sit near a lamp.

With a gentle tug, a diminutive crank pops loose from its right side, allowing you to control games the way you’d reel in a fish. Even this new addition feels intentionally old school, the analog control having more in common with a jack-in-the-box than Joy-Cons. So far, I’ve found myself preferring the traditional controls of its two face buttons and directional pad, though I’ve only tried four of the 24 games that will launch over the console’s first 12 weeks.

Crankin’s Time Travel Adventure lets you crank the Playdate handle to move time forward and backward in hopes of getting a robot to their date on time. Twirling the crank in one direction sends it skipping forward, while the other direction reverses its motion. The rest of the world perpetually moves forward in time and at a regular pace, so you must move the robot forward and backward to evade obstacles. It’s quite cute, like all games by its co-creator Keita Takahashi, best known for Katamari Damacy. And like many of his other games, its slow pace and repetition are an acquired taste.

Lost Your Marbles has you solve puzzles by navigating a marble across a 2D environment, using the Playdate’s crank to rotate the world, shifting the pull of gravity on the little ball. It’s visually simplistic, akin to a calculator game aesthetic. Nudging the marble across the screen is also the most fun I’ve had with the Playdate, maybe because it feels (as with so many calculator games in the 1990s) like its creators had manipulated the device to do something it wasn’t meant to. This pinch of magic has given me hope that the crank is more than a gimmick.

Saturday Edition drops you into a moody adventure game in the spirit of Maniac Mansion and the LucasArts games of the 1990s. The art style is exceptional, using close-ups of objects to make the tiny screen feel like a magnifying glass.

And lastly, we have Whitewater Wipeout, a surfing game controlled with the crank, steering the surfer left and right. A tap on the directional pad at the right moment sends the surfer dude off the crest and into the air. At first, the controls infuriated me, though I have no doubt a small group of people will devote themselves to mastering the twisty twerk, much like I put too much time into California Games because I rented it from Blockbuster for the weekend and I’d be damned if I didn’t force myself to have some fun.

The games I didn’t get to play are just as interesting as the ones I did. We’ve still yet to try the Playdate games co-created by some of our favorite designers, like Bennett Foddy, Zach Gage, Diego Garcia, and many others. That may be the real hook of the Playdate: not the system itself or even the quality of individual games, but the pleasure of receiving new games that will appear on the device across regular seasons. In the same way, we don’t expect an episode of TV to necessarily stand on its own, I have some hope that Playdate’s catalog will be more enjoyable as a complete season.

Nintendo Switch this isn’t. But the Playdate’s creators have nonetheless gotten in touch with an energy and inventiveness similar to what Nintendo has nurtured for the past 40 years. Early Nintendo hardware provided just enough power for hundreds of small games studios to make plenty of junk, many novel distractions, and even a few classics that fit comfortably on Nintendo’s infinitely more powerful modern devices. Playdate appears to be making a comparable (albeit much smaller) bet.

So no, this isn’t the future of video games, but it’s a promising historical revision of a world in which some of the world’s best game makers ignored the world of complex big-budget games and invested their time and talent into a smaller, cheaper, more accessible gizmo. Because despite what tech companies will tell you, great ideas aren’t inherently limited by raw computing power. They’re limited because they need an audience and a home. Maybe Playdate can provide both.

The Playdate was tested with a pre-release product provided by Panic, Inc. Vox Media has affiliate partnerships. These do not influence editorial content, though Vox Media may earn commissions for products purchased via affiliate links. You can find additional information about Polygon’s ethics policy here.