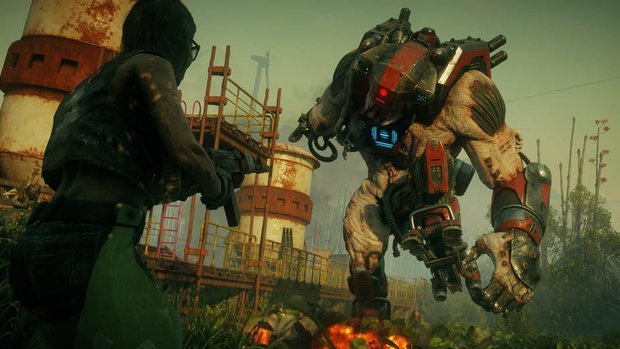 To call it “visceral” is bordering on an understatement; enemies explode into showers of scarlet, kills adorn the reticule with a bloodied skull and headshots are accompanied by a horrific (yet satisfying) squish.

The weapons are loud and packed with force, while the abilities rock the screen and add a new layer of havoc. The omnidirectional dash is liberating, really putting you in the combat boots of a Nanotrite-enhanced super-soldier as you duck and dart across the battlefield.

It also makes traversing Rage 2’s environment a breeze when coupled with the double jump and Rush ability – more like a gale force hurricane, actually, in Rush’s case.

The crown jewel of Rage 2’s combat, however, is Overdrive, the combo-driven meter that elevates the gunplay to another level. You can, and should, use Overdrive regularly, not only because it’s efficient and incredibly useful, but also because it’s just plain awesome.

It cranks everything up to 11, boosting weapons’ rates of fire, damage, and all-round carnage. The screen goes wild with saturation and retro glitches, while the audio becomes a pulsating techno pandemonium in your eardrums.

There are a few mini-boss fights where you feel hampered, though, without any cannon fodder to generate Overdrive from.

Thankfully, there is an Overdrive Infusion that you can craft and upgrade, which can max out your meter at the touch of a button.

Rage 2’s gunplay is brilliant on its own, but once you’ve grown accustomed to unleashing Pandora’s box at will, you’ll be jonesing for another hit of the psychoactive Overdrive.

The different sections of Rage 2’s sprawling map are also home to unique biomes, from arid, desolate deserts to boggy swamplands. Though it’s an attractive game to look at, there’s currently a fair share of performance issues, at least on the PS4 Pro.

The menus are laggy, sometimes taking up to 10 seconds to navigate to the right tab. I also managed to lose my HUD on a number of occasions and kept encountering NPCs that I couldn’t interact with, despite them having a “Talk” prompt.

Hopefully, these issues can be improved in future patches, as it can definitely get in the way of the frenetic fun you should be having with Rage 2. 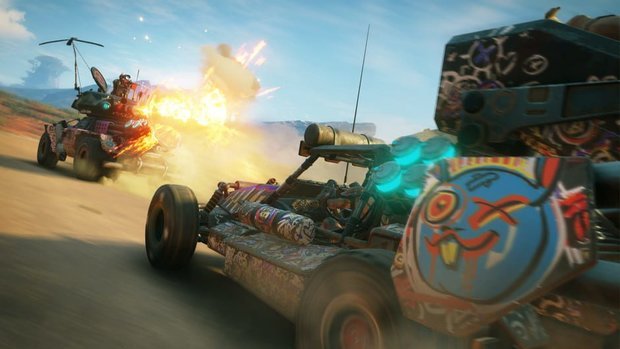 Fortunately, microtransactions are far from a distraction, being hidden behind a login page on the main menu, and only being used for cosmetic items. The infamous cheat codes and experience booster can be purchased using in-game currency, too.

Though you never level up yourself, you are constantly progressing towards a host of different things at once.

You can upgrade your weapons, abilities, equipment, and vehicles, all of which require their own unique items and currencies, and it’s easy to lose track of everything.

I’m a sucker for skills trees and constant progression systems, but Rage 2 feels like it’s trying too hard when it should have narrowed everything to 2 or 3 upgrade modifiers.

On top of everything else, there are 3 friendly factions that you’ll be assisting, each accruing their own experience points when you complete a different type of mission. Loosum Hagar, for instance, rewards you for destroying turrets and hunting down convoys.

The driving in Rage 2 feels off, somehow stiff and loose at the same time, but it’s worth sticking with it for the epic convoy showdowns.

The general structure of the game is mainly open-world encounters or dens, hideouts, and other locations that you need to find, cleanse of mutants and baddies, and then move on. There’s a very fluid order of completion, thanks to this, but it does mean you can sweep through the story in 7-8 hours.

Admittedly, this is a worryingly short playtime for a AAA open-world title, but you’re spoiling the experience for yourself, if you rush through it. 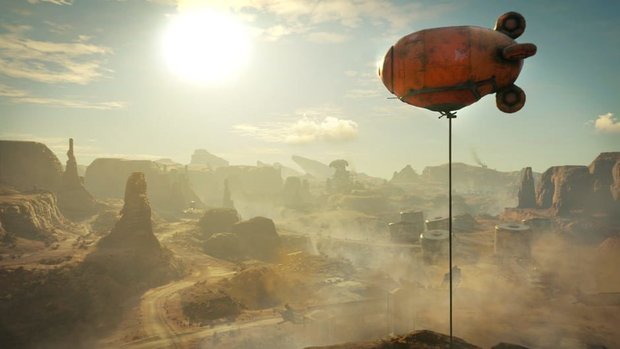 If narratively shallow yet entertaining movies are popcorn flicks, Rage 2 is the ultimate popcorn game, and that’s okay.

At no point during my 15 hours running rampant around its post-apocalyptic wasteland did I feel the need to know more about a character’s subplot, or question the antagonist’s motives. I was too caught up in the spectacle of carnage to care.

There’s plenty to explore and explode in Rage 2, though it could do with better signposting towards its cooler weapons and abilities. It’s criminal that some players will finish Rage 2 without ever feeling the juvenile glee or jettisoning mutants into the stratosphere with the Grav-Dart Launcher.

Games To Play While You Wait For Elden Ring

Why Solid Wood is the Eco-Friendly Furniture Choice