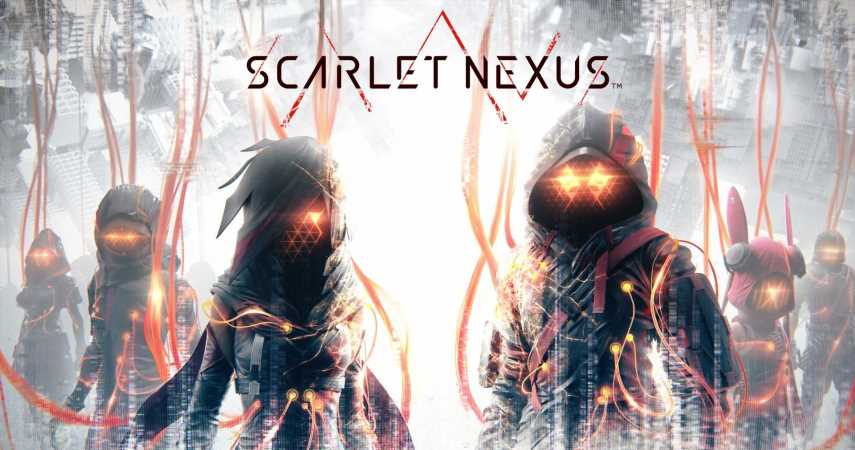 Scarlet Nexus falls victim to far too many anime archetypes. Every step it takes towards telling a compelling story is held back by bland character personalities and narrative twists that seldom possess enough substance to justify their own existence. The journey you embark on remains engaging throughout, but it becomes difficult to ignore many of its smaller blemishes. Its apocalyptic world holds promise, but ultimately, the game fails to capitalise on it.

Like Code Vein before it, Bandai Namco has crafted Scarlet Nexus into a stylish adventure with myriad systems that gel together wonderfully, but the overall tone and general inconsistency hold it back from achieving greatness. This journey into an alternate reality ruled by alien creatures should be endlessly inviting, but instead it seems determined to push you away with obtuse pacing and a cast of characters who aren’t worth investing in.

Despite my misgivings, Scarlet Nexus makes a wondrous first impression. You play as either Yuito Sumeragi or Kasane Randall, two young adults who are recruited into the Other Suppression Force (OSF) and tasked with defending the city of New Himuka from cryptic enemies known as Others. Our heroes, and many others like them, are in possession of supernatural powers and harbour a natural connection with their brain’s inner potential. It’s mostly a mixture of poorly explained buzzwords and mythology that my eyes quickly glazed over, but the drama at the centre of it all kept me moving forward. 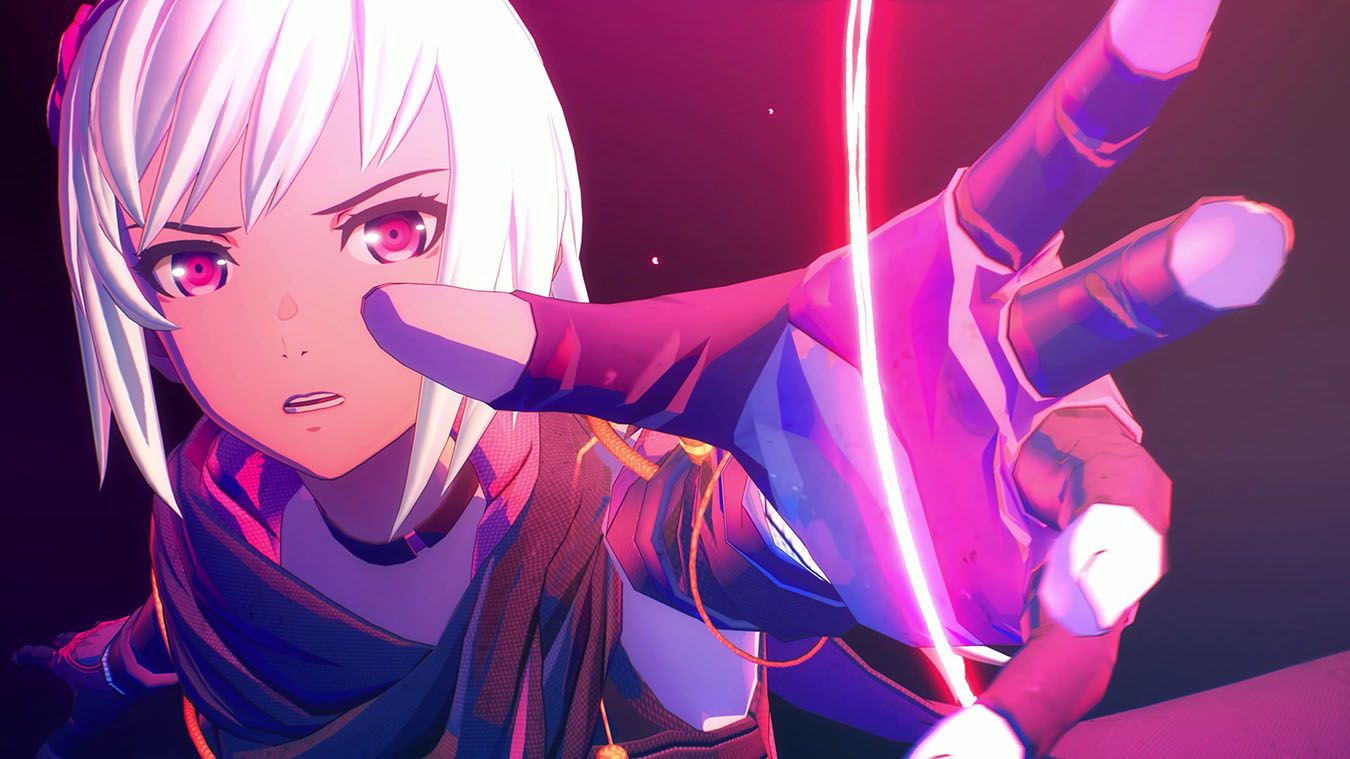 The game doesn’t spend much time explaining its world’s history, so you’re often left scratching your head in search of where these people came from and what their overall mission even is. As the campaign delves further into the metaphysical expansion of our own reality and the political machinations that underpin many of its societal conflicts, it can be far too easy to find yourself lost amidst the jargon. While many games are criticised for throwing wave after wave of exposition at you, Scarlet Nexus would have benefitted hugely from a character sitting me down and just explaining exactly what the hell was going on. The environments you explore are too dull to express any semblance of natural storytelling, with repetitive levels, cities, and streets cropping up over and over again in the campaign’s first act before finally expanding into more diverse locales as the game goes on.

I decided to play as Kasane Randall, an adopted child in a family that has meaningful ties in the trading industry. Throughout the opening hours I’m accompanied by my sister, who is the overly bubbly sibling we’ve seen in anime and similar JRPGs time and time again. She fancies a cute boy, and for some reason my character’s sole motivation for the first handful of missions is to find out if this guy is boyfriend material – surely I have better things to do, especially when the world I inhabit seems to be in ruin as humanity tries to defend its last bastion of civilization from an alien menace. But no, gotta be a humanoid version of Tinder for my sister. 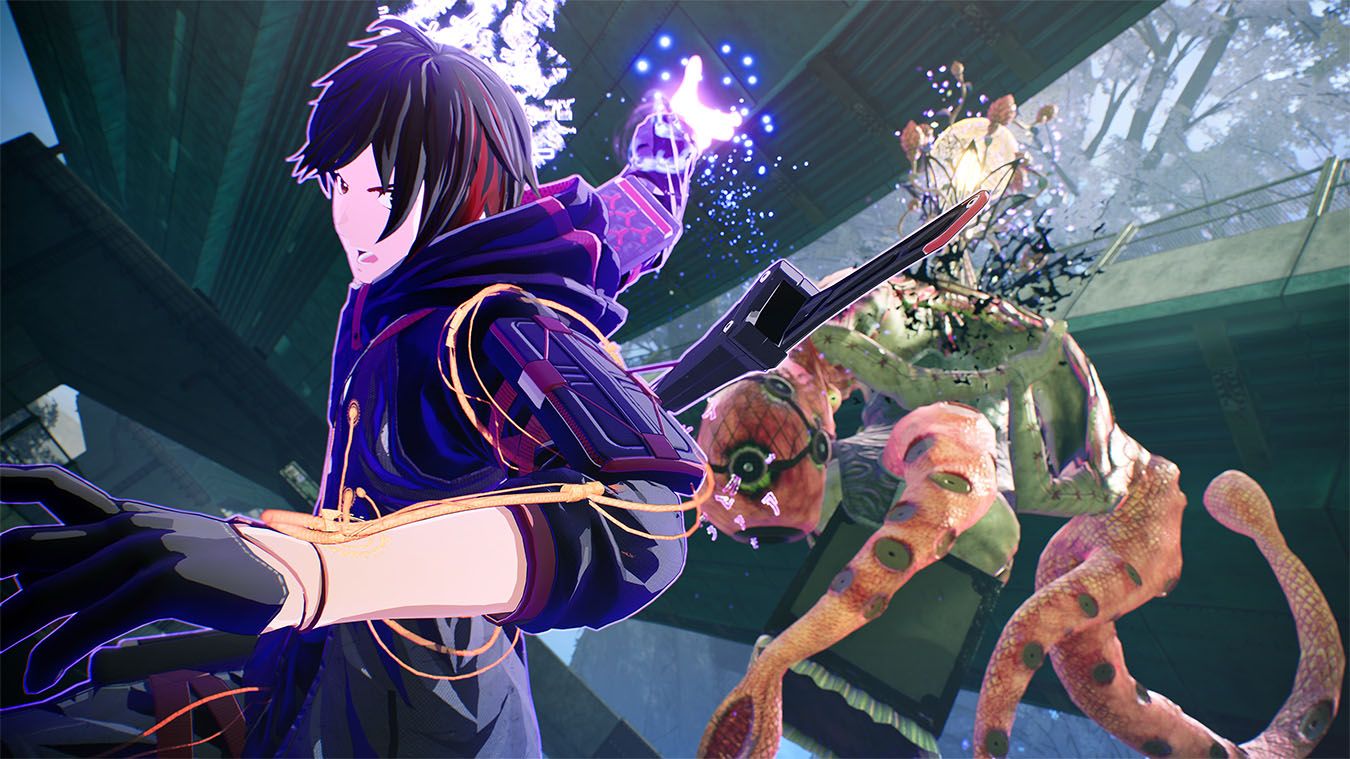 All of these characters look like teenagers, but in the lore they’ve been administered with drugs that prevent them from ageing so both their appearance and powers remain intact. This is a fascinating ethical quandary to explore given these individuals are being roped into a perpetual conflict against their will, but Scarlet Nexus never really addresses these themes in a meaningful way, instead deciding to tackle a fun yet underwhelming tale that doesn’t have the personality or dialogue to carry it forward. The pacing is oddly confrontational, having you hopping between similar levels, tutorials, and lengthy dungeons in a way that never serves your enjoyment.

Combat is where Scarlet Nexus excels. In a world where so many JRPGs are trying to ape the action of FromSoftware’s library, Bandai Namco has chosen something that feels more akin to Devil May Cry. Your main ability is psychokinesis – the ability to lift objects from the environment and hurl them at your foes to deal massive damage. However, this must be rhythmically combined with close-ranged melee attacks to build up combos and stagger enemies so they’re vulnerable to epic finishing moves. It looks fantastic, awash with dynamism as the largest of encounters meet their climax in an explosion of lilac and crimson fireworks all courtesy of your own psychic powers. It’s badass, and once party members join the fray, it only grows in mechanical complexity.

Fellow members of the OSF each have their own unique powers. Some can conduct electricity and imbue your attacks with sparks, while others can slow down time and turn you invisible so sneak attacks can be performed in a matter of seconds. One of my favourites is a duplication spell, which not only allows my party members to split themselves into multiple forms, but also triples the amount of objects thrown at monsters when using my own powers. You can activate additional abilities with the press of a button, with the act of switching between them being a breeze as you dart throughout the battlefield like some form of post-apocalyptic ninja. 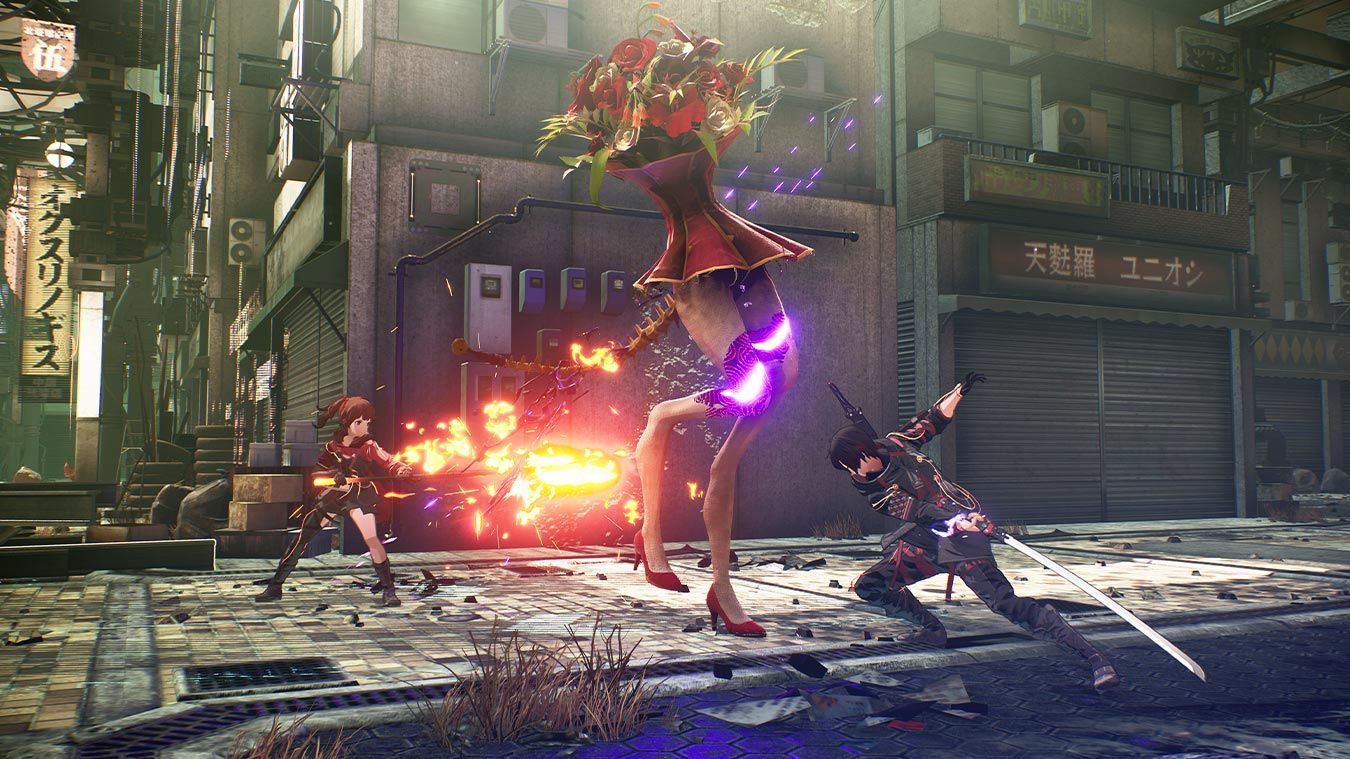 It’s a shame that the movement system often holds back the ferocity of combat. It’s very easy to find yourself stunlocked into a corner as multiple enemies inflict status ailments on you. There’s no escape from situations like this, so the only option is to watch as your health slowly dwindles down towards an inevitable death. From here, it all needs to be restarted, with some later boss battles often feeling like an exercise of endurance as opposed to a triumph of strategy. An inconsistent dodge animation only compounds this issue, although you can get a better grasp on things by delving into the skill tree and administering upgrades.

Because this is a JRPG in 2021, social elements between you and your fellow party members are also incorporated into the experience. After each story chapter you will retire to an apartment where you and your friends can chat, exchange gifts, and just vibe before embarking on the next mission. It’s a welcome distraction from the melodramatic narrative and chaos of conflict, so I often found myself purchasing presents and handing them out to my friends like a weeaboo Santa Claus whenever the chance presented itself. Give them the right stuff and you’ll be rewarded with new abilities in battle, as well as passive buffs that spread across the entire party.

These are bundled in with Bonding Missions, which are unique instances of dialogue or larger side activities that focus on a specific character. I think the intention was to provide these characters with emotional depth, but compared to the likes of Fire Emblem or Persona, they all feel like strangers. The world and themes of Scarlet Nexus have so many opportunities to surprise you, but they’re frequently stalled by an inconsistent story fraught with convolution. When the true threat of the campaign and my personal place in it all came to light, I was completely on board, relishing in the absurdity of it all, but when all of the parasocial elements intended to support it fall flat, much of its potential follows suit. 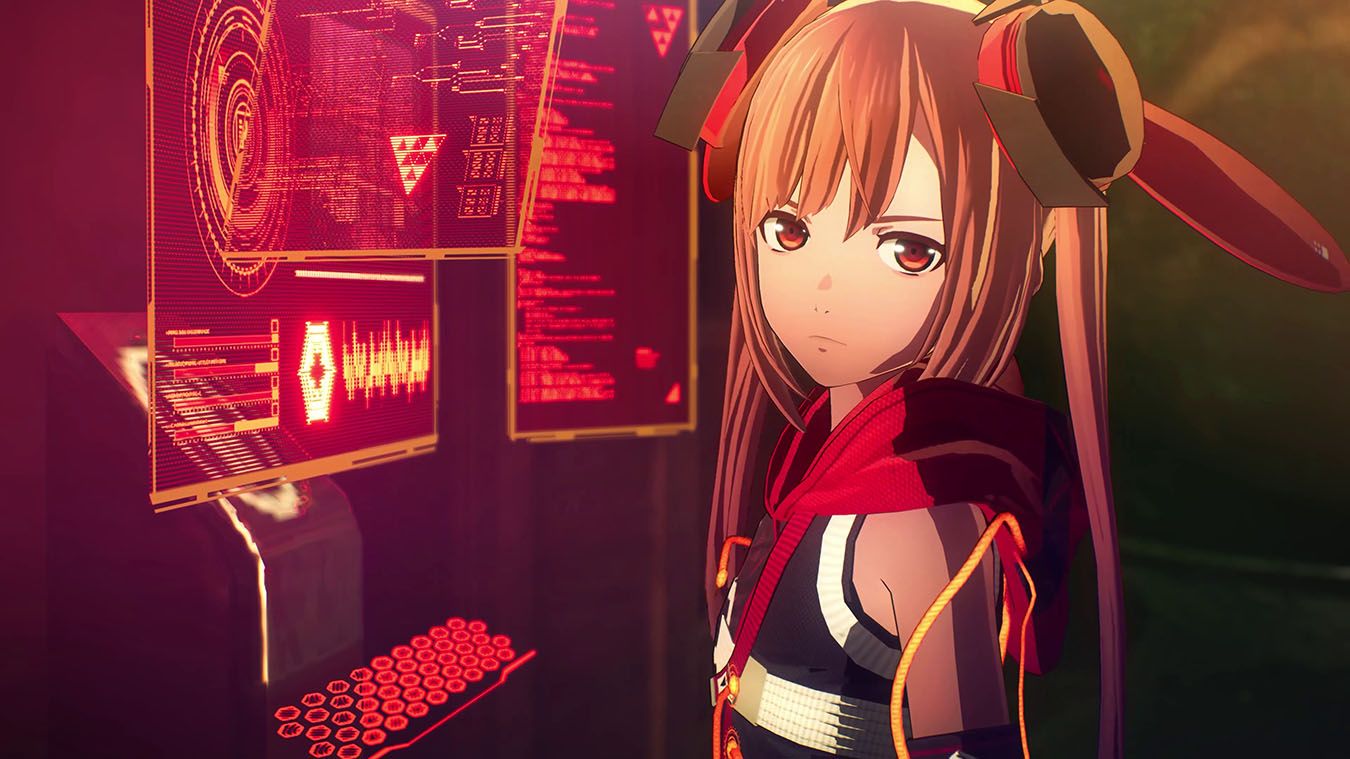 The campaign comes to life in its second half, leaving behind repetitive dungeon layouts and a relatively dry plot in favour of something infinitely more engaging. It all goes a bit wild, and isn’t afraid to make you connect the strings between characters and major events to piece together exactly what is happening. It’s still nonsense, but the good kind of nonsense where you can willingly leave your brain at the door and go along for the ride. However, it would have been much stronger if the underlying mythos had more going for it.To me, it often fumbled over its own concepts and ideas, rushing ahead for dramatic revelations that simply didn’t have the context to make me care enough.

Bandai Namco has described Scarlet Nexus as a ‘brain-punk’ experience, a new take on science fiction that takes inspiration from the ‘80s and ‘90s Japanese neo-punk popularised by the likes of Katsuhiro Otomo and Masamune Shirow. The focus is on sprawling megacities and a society where all brains are highly developed – I can see the intention bleeding through every aspect of the game, even if its passion is nullified by the wider world. It’s often isolating, with unremarkable futuristic cities and abandoned ruins feeling detached from whatever this place is meant to be, while a lack of narrative substance leads many of its stronger concepts to falter. I love the willingness to experiment on display here, but it’s worlds away from standing alongside the likes of Akira and Blade Runner.

If you’re after an anime-infused action romp in a similar vein to Akira or Sword Art Online, Scarlet Nexus is almost certainly worth a punt. However, there are a few caveats. Combat is excellent yet not without its flaws, while the story being told and characters you encounter don’t have nearly enough depth to feel emotionally resonant. The potential for something brilliant is here, but much like Code Vein before it, this is a game that seems determined to stop itself from achieving something truly special.

A review code was provided by the publisher. Score: 3.5/5