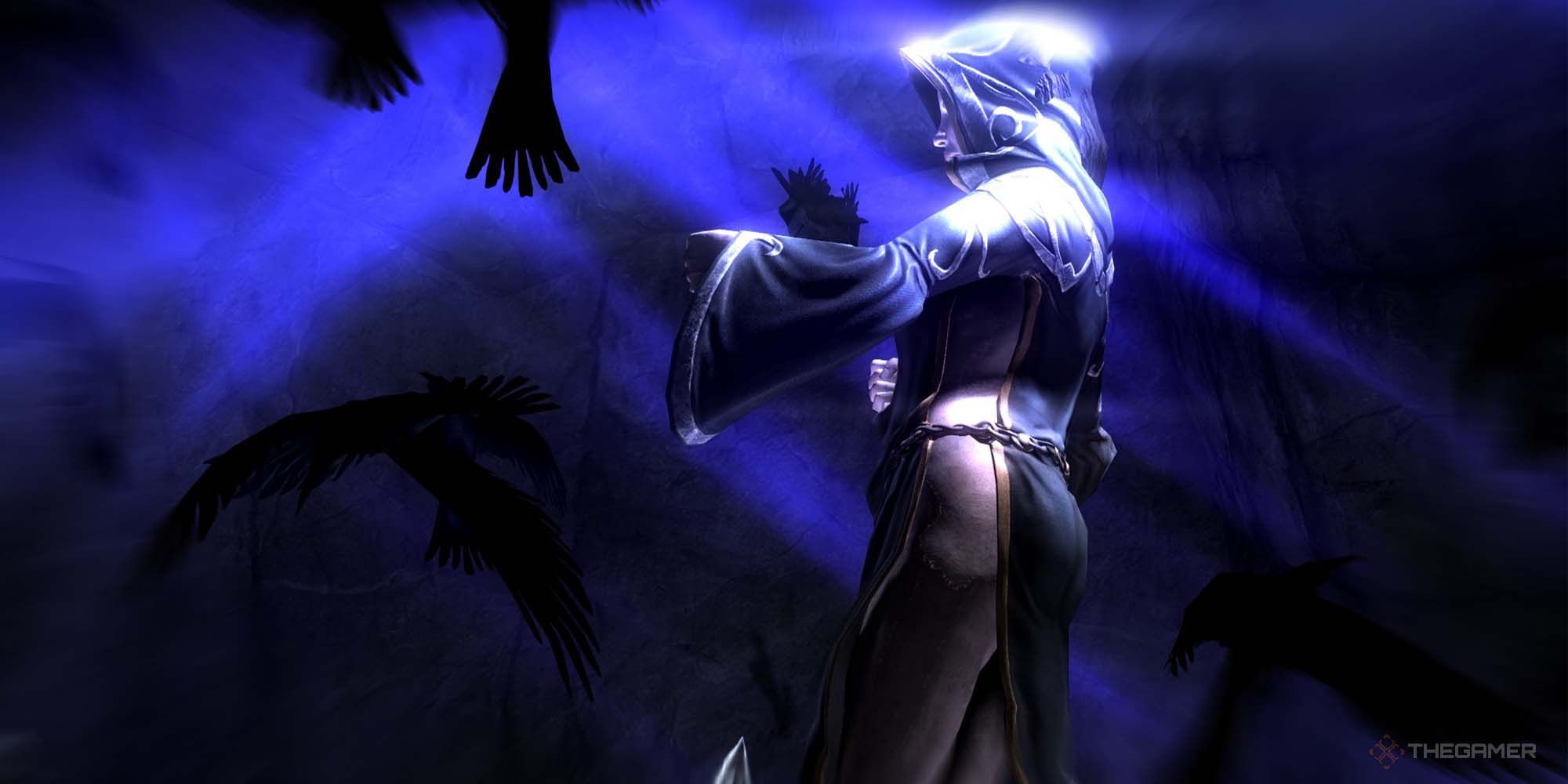 I arrive in Riften to find a guard holding up the front gate. It’s locked and he won’t let me in unless I pay up – he’s put a price on entering this dingy little waterside town in the far corner of Skyrim. But I catch onto his ruse and persuade him to let me in. He’s just trying to shake me down, it turns out. When I walk into the city, someone else gets in my face. This time, they’re asking why I’m here. It sets the tone immediately. Riften is a place of paranoia – there are thieves running amuck, guards firing off arrows, and townsfolk at each other’s throats.

That’s because it’s home to the Thieves Guild. Cross a bridge and you see Sapphire pulling one over Shadr, and beyond it awaits a marketplace where you meet an infamous scam artist. He’s peddling fake falmer blood and other elixirs. Just another day at Portobello Road, aye? It’s Brynjolf, the character with the most distinct sounding voice besides Cicero, and he immediately catches onto your potential. He lets you into a little scheme to plant contraband on another merchant, framing them. Succeed or fail, he’s desperate for you to join his ranks. It might seem like nothing but an initiation, but it’s as key as any other quest in the story – it gives subtle clues toward the state of the guild that you’re slowly but surely becoming a part of. Their hideout is a shadow of its former self, and the guild is down on its luck with a worsening reputation – you’re thrust into a story that has already begun and are left to piece everything together.

But joining the Thieves Guild at their lowest is what makes the story so engaging – we’re brought in off the streets, lurking in the sewers, doing odd jobs to stay afloat. None of it feels necessary right away. Maven Black-Briar tasks us with uncovering a plot against her while she tries to cut down rival breweries to gain a monopoly. We’re a pawn to a paying customer. It’s hardly as grandiose as assassinating the Emperor, killing the World-Eater, or stopping a rogue Thalmor agent from undoing reality. But it works in the story’s favour – it’s a slow-burner that contextualizes itself as we progress through the questline. That rags to riches growth keeps the flow going. 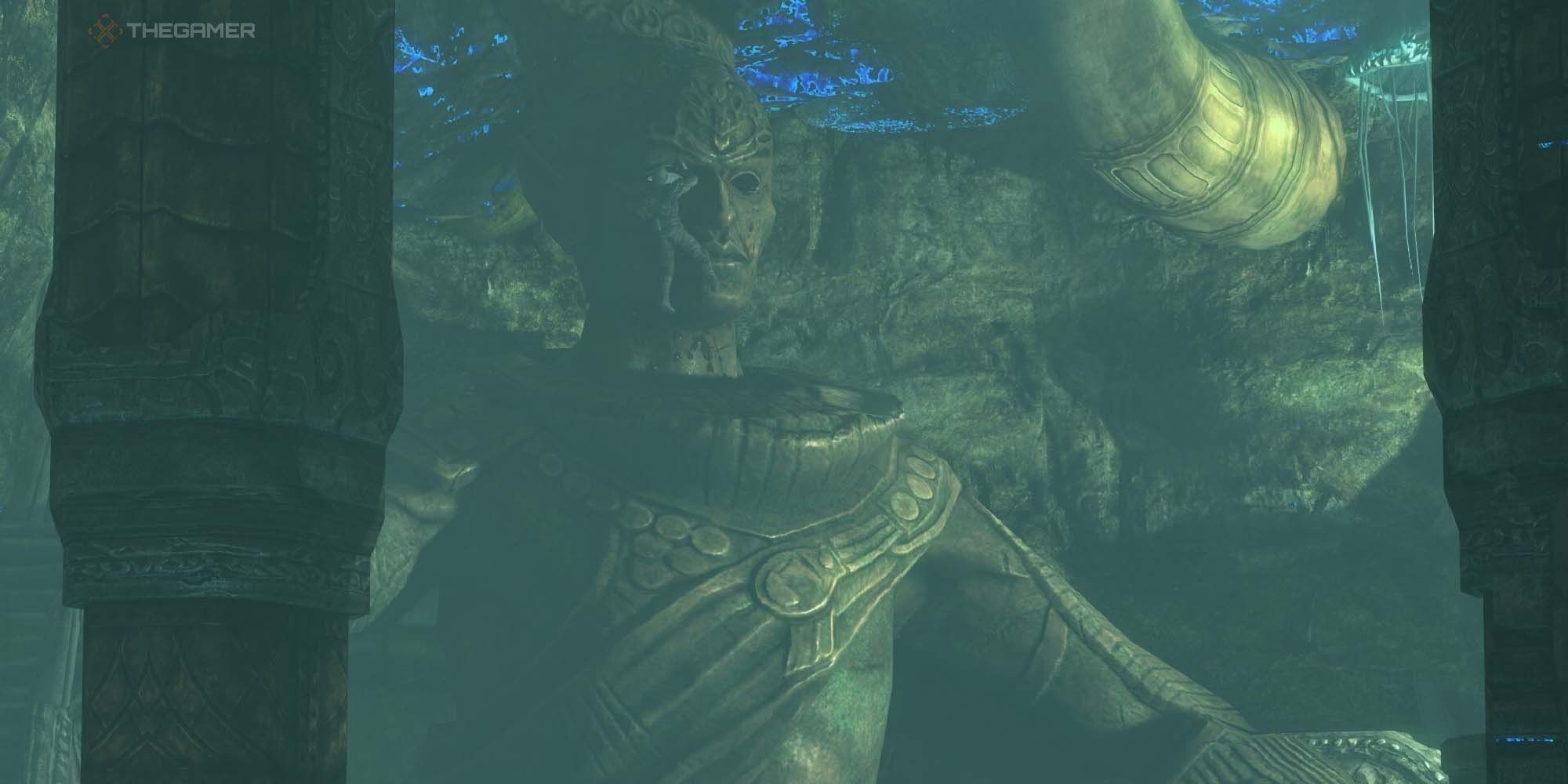 There are so many twists and turns, which is perfect for a story steeped in political intrigue. We find that guild master Mercer is the true villain, and banished member Karliah has been framed. She’s part of the Daedric Prince Nocturnal’s Nightingales and invites you and Brnyjolf to join her and take Mercer down. It’s familiar because several elements come from other quests in the game: the inner sanctum of Daedra worshippers is seen in the Companions; the traitorous leader is a plot point in the Dark Brotherhood; Karliah’s fierce loyalty to the guild’s roots is reminiscent of Cicero.

It takes the best ideas from across Skyrim and condenses them into a single, focused narrative. There’s no filler and momentum is maintained from start to finish – the second you join, every quest from then on is a treat while all the main characters are well-developed and rarely underutilized. Even the dead guild master Gallus gets his time to shine – I only wish we had more from Delvin.

Anyone that’s starting Skyrim should go straight to the Thieves Guild. You get to see dwemer ruins, nordic dungeons, a Daedric Lord, and the best hub the game has to offer. It has all the highlights. But they’re not just one and done spots – they’re often tied to new characters or existing locations, expanding on the entire region they inhabit. Honningbrew Meadery’s plot brings us to the heart of an innocuous drink we find all over Skyrim; our travel to Solitude shows how deep the corruption of the East Empire Company goes; back home in Riften, we see the stranglehold the Black-Briars have on the city – every quest ties into the overarching Thieves Guild story, but it also builds on Skyrim’s lore in a unique, seamless way.

If I had to point to one part of Skyrim as a reason for why I love it so much, it’d be the Thieves Guild. There isn’t a blotch on its record and it’s a towering example of Skyrim at its best.