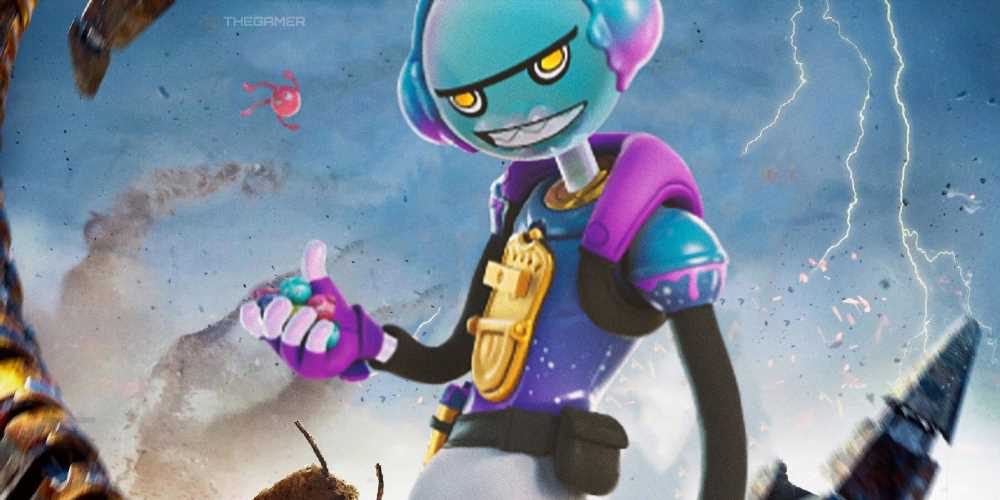 Earlier this week, I did a very bad thing. Something you should never ever do. It’s taking a lot of guts to admit this, and I’m sure my friends and colleagues will never look at me the same way again, but I think it’s best if I just admit it so we can work towards a brighter, more honest future.

Okay, I think I’m ready – earlier this week I bought 50 levels on Fortnite just to gain access to Gumbo.

Don’t look at me, I’m hideous! You know what, though? Seeing that £25 fly out of my account as my roommate looked on in horror was worth it because Gumbo is Fortnite’s best ever character – and proof that you don’t need to be obsessed with IP to keep your players interested.

In a season that plasters Spider-Man everywhere you look, Gumbo is easily the highlight of the whole battle pass. We’ve seen ninjas, human-llama hybrids, and countless superheroes before, but we haven’t seen a Lovecraftian Splatoon and Jet Set Radio mashup before. Gumbo is exactly that, and he’s perfect.

Although a walking gumball humanoid creep is already a pretty sweet prospect, it’s the small details that make Gumbo so much fun. It’s been a while since I jumped into Fortnite, but I don’t think there’s another character out there that has as many small details as my gummy lad.

The best of these is the gumballs in his head that move around as you play, which can actually be removed by performing an emote where Gumbo chews and pops them. It’s a funny detail that makes you wonder what this weirdo is doing hanging out with The Foundation, a feeling that is only made worse when you notice his backpack full of gumballs that are crying out in terror as you walk around. Is he a cannibal? Maybe. Is he adorable? Definitely.

Then you notice that it’s not just the gumballs in his backpack that look scared, all of the ones in his head have a terrified look on their faces, too. To be fair, these little guys are being chewed up to be used as a glider, so we can’t really blame them. Wait, is that a dead, squashed gumball on the bottom of his hammer? Fucking hell Fortnite, calm down a bit.

Gumbo may initially look like another Peely, an anthropomorphised bit of food to appeal to the kiddy winks, but he’s actually a terrifying creep more fitting for a Halloween event. Even his loading screen art is off, seeing him looking like something out of a Rob Zombie animation and practically butchering a bunch of gumballs. Oh, he's also got a rap that is half an absolute bop and half an existential look into not knowing where his powers come from but a statement that he'll keep on using them anyway.

It’s because of this that Gumbo is easily the most memorable Fortnite character of the whole Chapter. Maybe I’m just a weirdo who loves fluorescent gumball men, but it’s just nice to be drawn to something in Fortnite beyond “recognisable IP from that film you done watched or game you played”.

I’ve fallen for that trap before – I was practically begging for Naruto to join the game – but once you’re over the initial wow factor of seeing a famous character running around with an AK-47 and dabbing on fools, it feels a bit… dirty. Seeing my favourite Konoha ninja in a game is great because I bloody love IP, but I soon realised Epic just turned something I love into a marketing tool.

It feels the same with Spider-Man this season. There’s some clear love for the character here, and I’d argue it’s one of the best superhero crossovers Fortnite has done since Batman, but it still just makes me think of Epic and Marvel suits standing in a room throwing money at each other.

It doesn’t help that he’s the bloody Level 80 unlock, meaning that fans of the character are going to have to grind Fortnite for weeks to play as the character who is front and centre of all the marketing. It’s all a bit slimy, even if it’s nothing new for Fortnite, who pulled the exact same trick with Rick a few seasons ago. I haven’t forgotten, Epic, and I never will.

Gumbo is still technically part of that money machine as an original Fortnite character, but at least he is original. Epic will be getting your money no matter what, but at least the best character of the lot isn’t just another show of how big Fortnite’s IP appreciation is. Yes, that’s a member-measuring metaphor. Now come here, you big yummy gummy guy.