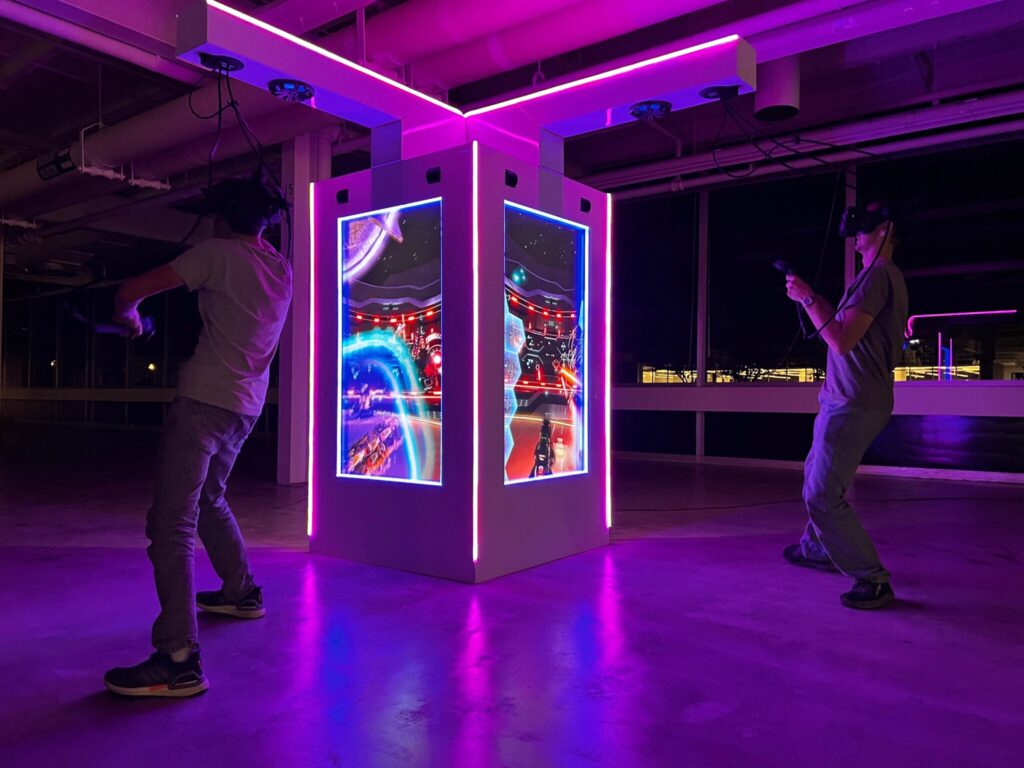 Location-based entertainment (LBE) has really begun to bounce back in 2021, with VRFocus’ regular The Virtual Arena feature highlighting all the work that’s been achieved. One specialist in the space is VRsenal, which makes unmanned virtual reality (VR) arcade units such as Lightsaber Dojo: A Star Wars VR Experience in collaboration with ILMxLAB and Nomadic. With the IAAPA Orlando Expo taking place this week, VRsenal has revealed.

Rhythmatic comes from British VR developer Blackwall Labs, who actually launched the multiplayer rhythm-action title back in 2020, allowing up to 6 players to compete against one another. The collaboration between both companies will see Rhythmatic released as a two-player experience on VRsenal’s new V2 hardware platform. Just like its predecessor, this new setup won’t require an arcade operator to function in a family entertainment centre (FEC).

However, the platform allows up to four cabinets to be linked together for 8 player sessions, really emphasising the competitive, multiplayer gameplay of Rythmatic.

“As a long-time fan of the rhythm game genre, it has been a dream of mine to bring a cutting edge, multiplayer, music-based experience to virtual reality,” said Sam Perrin, director of Blackwall Labs. “That we’ve been able to partner with a market leader like VRsenal to bring Rhythmatic to the FEC space as a fully unattended, multiplayer attraction is the icing on the cake.”

As for Space Pirate Trainer, this single-player shooter will be available in all its drone destroying glory, with two players able to enjoy the wave-based gameplay at the same time.

“Everybody remembers Galaga, but Space Pirate Trainer lets you climb inside a game like that and take personal control of the avatar,” said John Coleman, Vertigo Games’ CFO and Business Development Lead. “With approachable gameplay that also offers veteran players a wide range of options, Space Pirate Trainer is ideally suited for the arcade space.”

VRsenal will be showcasing its new V2 hardware platform during the IAAPA Orlando Expo this week using Rhythmatic – which will also be a launch title for the new hardware.

“Operators now have an option to create a high-throughput, affordable attraction with full-body AAA VR content, and never have to worry about staffing the game,” Ben Davenport, VRsenal CEO adds. “This is a very hard thing to pull off in VR.”

As LBE VR continues to gain ground, VRFocus will keep you updated.