Uncharted: Drake’s Fortune always made sense as a movie because it basically was one. Lifting from Indiana Jones and every pulp trope in the book, the game brought interactivity to a style well-known to adventure movie buffs. After it debuted in 2007 and sold over 2.5 million copies for the PlayStation 3, producers scrambled to convert Naughty Dog’s playable homage back into big-screen entertainment.

Today, they’re still trying. News broke this week that yet another director, 10 Cloverfield Lane’s Dan Trachtenberg, would depart the film after eight months of involvement. The loss continues a decade-plus trend of writers and directors coming and going from the proposed project. Much like the bruisable-yet-relentless Nathan Drake, Sony, Naughty Dog, and individual producers have never quit on the Uncharted movie.

Speaking to Polygon as part of Vox Media’s SXSW 2019 pop-up The Deep End, Amy Hennig, former writer and creative director of the Uncharted series for Naughty Dog, explained her approach to working with incoming directors since the rights were optioned in 2007.

“You have to be able to distill what it is — what’s core to the franchise — and be able to then let it go, but then be real candid and clear with filmmakers when you feel, like, ‘You’re kind of breaking the thing,’” Hennig said. “But what’s interesting is that all the resets on that, it never had anything to do with Sony or Naughty Dog. It was all their own Hollywood stuff.”

The number of people who’ve drifted away from Uncharted over the years is staggering when collated. The project first took flight when Avi Arad, the longtime producer of the Spider-Man series, and his son Ari announced a quest to bring the property to screen at E3 2008.

“The best thing about Drake is he’s not an archeologist,” producer Ari Arad told Kotaku, just under a year after the release of the first Uncharted game. “He’s not a benevolent guy, but he’s certainly not a great guy. Indiana Jones was always a good guy and he relentlessly did the right thing. Drake is a guy who’s being hauled over to virtue throughout the game.” 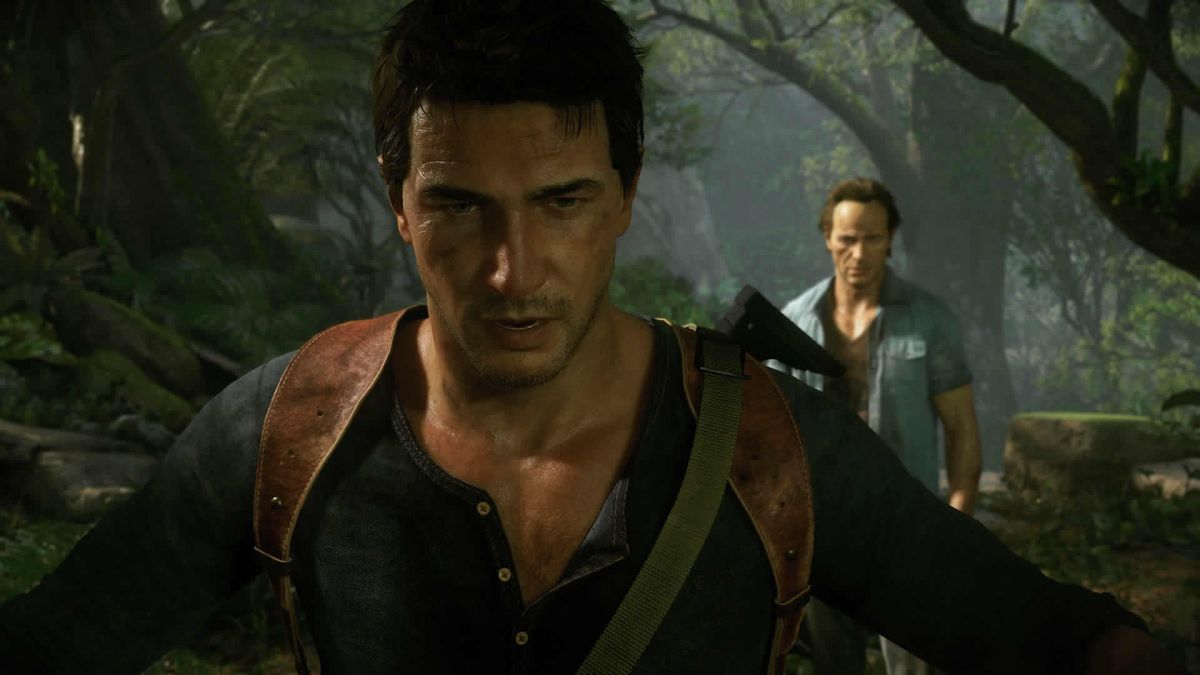 Nathan Drake (foreground) and his brother Sam in a scene from Uncharted 4.
Naughty Dog/Sony Interactive Entertainment

Arad added that he loved playing games, enjoyed meeting developers, and hoped for Arad Productions to become one of the premier entities translating AAA titles into movies. “We really want to live up to what these guys have created.”

In 2010, Sony, then running under the Columbia Pictures moniker, locked a director: David O. Russell, who was on the awards season trail with his new movie The Fighter.

“David is a tremendous choice to take on this film,” Matt Tolmach, then president of Columbia Pictures, said in the official announcement. “He’s equally adept at combining all the classic elements involved in this property: great character development, strong comedy, and amazing action sequences. He has a brilliant vision for this material and we know he will bring his original, unique voice to this adaptation.”

Rumors swirled that Russell’s go-to actor, Mark Wahlberg, would take on the role of Nathan Drake. Wahlberg confirmed those suspicions to MTV in November 2010.

“David is one of the best writer-directors I’ve ever worked with,” said Wahlberg. “The idea that he has is just insane. So hopefully we’ll be making that movie this summer.”

The idea was to depart somewhat dramatically from the linear adventures of Nathan Drake, and instead make the movie more about the extended Drake family as they traveled around the world. When the Los Angeles Times talked with Russell for The Fighter in December of that year, he said he was halfway done with the script and looking to expedite the blockbuster for Sony.

“It’s a locomotive,” Russell said of the movie’s progress. “This idea really turns me on that there’s a family that’s a force to be reckoned with in the world of international art and antiquities … [a family] that deals with heads of state and heads of museums and metes out justice.”

In his interview with MTV, Wahlberg threw out names for his potential Uncharted co-stars, specifically Goodfellas veterans Robert De Niro and Joe Pesci.

“That’s who [David] wants to write the parts for,” Wahlberg said. “I talked to Pesci about it and I know David’s people have talked to [De Niro].” Wahlberg added, “I’m obviously in whatever David wants to do but the idea of it is so off the charts: De Niro being my father, Pesci being my uncle. It’s not going to be the watered-down version, that’s for sure.”

In May 2011, Russell departed the movie over “creative differences.”

“We’re re-writing the script from scratch, and I’m just jumping into that literally right now, about to close the deal and leap off,” Burger told We Got This Covered while promoting Limitless. “Until the screenplay is written you never know who’s going to be acting in it or not. But there are a lot of good actors out there who even look like Nathan Drake and who could do it.” 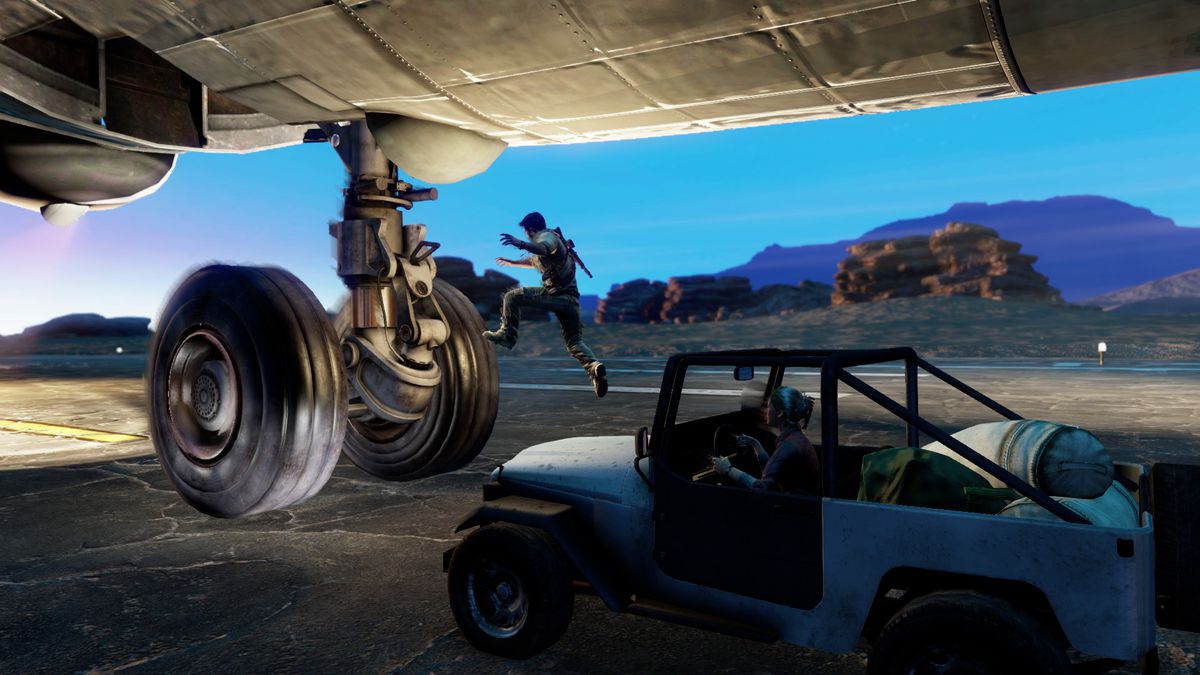 A year later, Burger dropped out of Uncharted, and new writers joined the project. Although National Treasure franchise writers Marianne Wibberley and Cormac Wibberley are the only ones reported on in an official capacity, Seth Rogen and Evan Goldberg say that Sony asked them on several occasions to come on board to pen an adaptation.

“They’re constantly asking me and Evan to make the Uncharted movie,” Rogen told IGN during a 2013 interview for This Is the End. “It’s just going to be Indiana Jones,” Goldberg added. “If we could figure out a way to make it not Indiana Jones, it’d be awesome.”

In July 2014, Sony put the long-gestating tentpole on the release calendar with a totally new team. Seth Gordon (Horrible Bosses) would now direct Uncharted based on a script by David Guggenheim (Safe House). Avi Arad and Ari Arad, along with producer Charles Roven (The Dark Knight), would oversee the production, with the film set for June 10, 2016, taking the place of the canceled Amazing Spider-Man 3. In emails unearthed in the 2014 Sony hack, one executive described this version of the film as “grittier globe-trotting Bourne.”

In November 2014, producers recruited Oscar-winning screenwriter Mark Boal (Zero Dark Thirty, The Hurt Locker) to rewrite Guggenheim’s script. Around this time, Mark Wahlberg officially detached himself from the project. Sony reportedly then offered the role of Nathan Drake to Chris Pratt, who declined.

In August 2015, Sony kicked the Uncharted can down the road with a new release date: June 30, 2017. Nearly a year later, the creative team manifested anew once again. Now it was Joe Carnahan (The Grey, Sony’s proposed Bad Boys 3) writing the script, with Shawn Levy (Night at the Museum) in the director’s chair.

“In a perfect world I would love to do both, but right now, I’m only on board to write the script,” Carnahan told Variety in July 2016. “Archaeology today is in itself an antiquity, but that world has always fascinated me. Especially when you go to a museum today and wonder how a piece got there to begin with.”

By 2017, the Carnahan version went out the window, replaced by a new draft of the script by Art Marcum and Matt Holloway (Punisher: War Zone) and Rafe Judkins (Chuck). Spider-Man: Homecoming star Tom Holland boarded the film as a young Nathan Drake, signaling a radical departure from both the game storylines and Russell’s family-centered pitch. In January 2019, producers hired 10 Cloverfield Lane director Dan Trachtenberg to get things back on track.

“I think Tom Holland is a brilliant actor,” Trachtenberg told GamesRadar earlier this year, “and the idea of not doing the video game stories, telling a tale that hadn’t been told yet, I thought was a really smart way in.”

This month, Uncharted lost Trachtenberg, who later joked on Twitter about also leaving over “creative differences,” fulfilling a true Hollywood dream. Holland remains attached to the project. Whether there’s a fresh draft or an entirely new script in the works is unknown. Uncharted currently has a release date of Dec. 18, 2020, opening opposite Steven Spielberg’s remake of West Side Story, Denis Villeneuve’s Dune, and Coming 2 America starring Eddie Murphy. 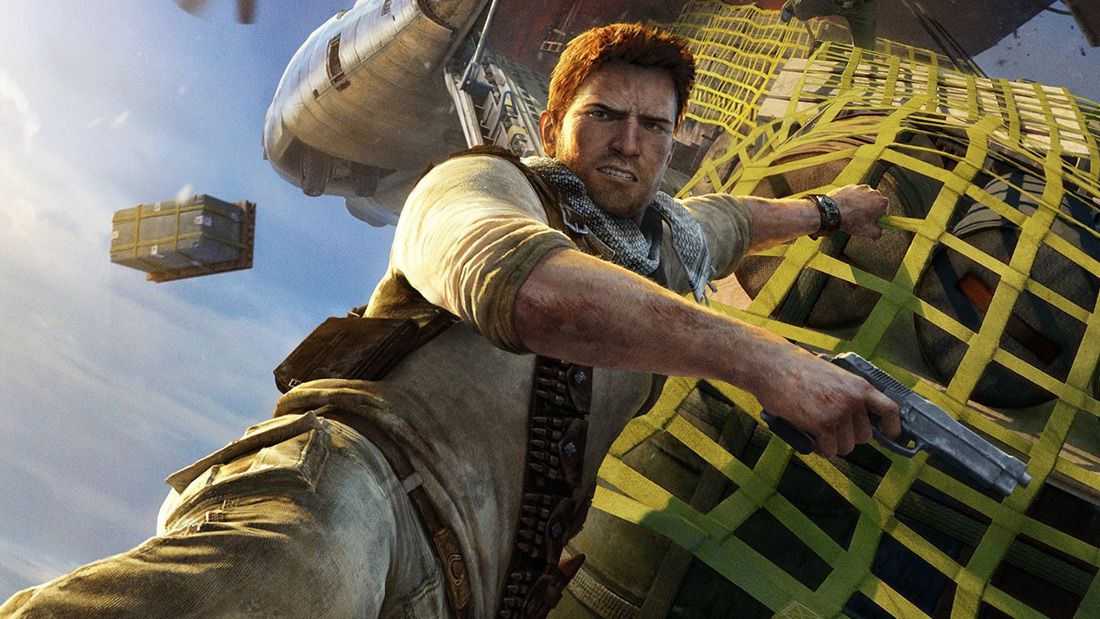 Drake on the cover of Uncharted 3.
Naughty Dog/Sony Computer Entertainment

What will it take to finally realize Uncharted?

“I think some of it is just having the humility to go, [gaming is] not an inferior medium,” Amy Hennig said at Polygon’s SXSW panel. She remained hopeful about Trachtenberg, whose film and TV work she saw as love letters to games he’s clearly enjoyed.

Despite Hennig being the visionary behind the Uncharted series, a trained filmmaker who found another dimension in the interactivity of the gaming space, she admitted that none of the producers behind the feature film adaptation had ever entertained the idea of her directing the movie. That’s just the way Hollywood works, for now.

“There is this perceived barrier and a prejudice about video game folks versus people in Hollywood,” said Hennig. “It’s sort of like, ‘OK, we got this now; you make your little games, but we got this.’ But what I’m seeing now as I’m going out and hustling and having a lot of meetings and stuff is that younger filmmakers, younger production companies, they grew up playing games, right? And so their attitude is far more inclusive and sort of blurry. They don’t have these entrenched, ossified ideas about who is worthy of doing this work. So I think we’re going to see a revolution of folks who’ve made all kinds of media crossing the lines, just because the technology is going to allow for it.

“The old-school folks are probably just going to be dinosaurs. This attitude that those of us in games aren’t capable — well, we clearly are. How many Uncharted games have we made since they optioned the [rights] and haven’t made a film? We’re OK at this.”