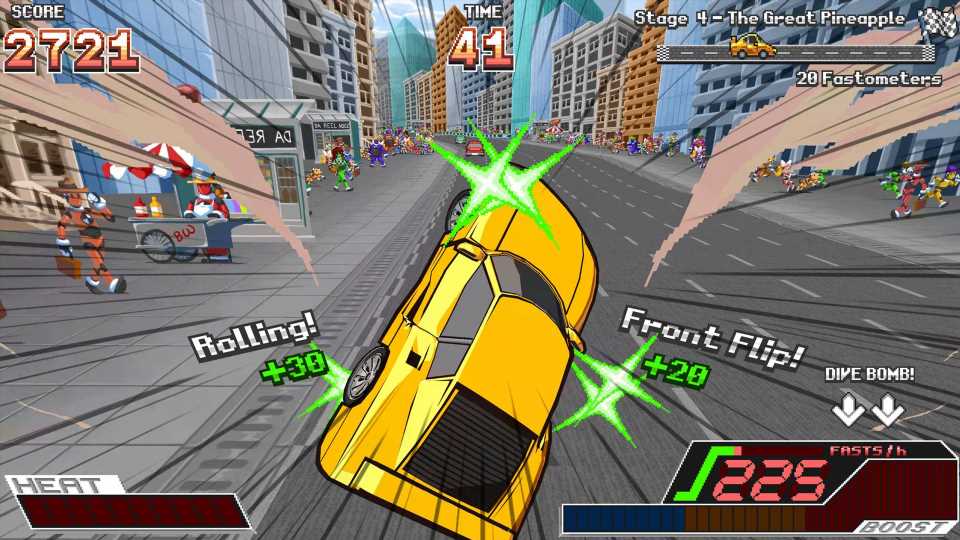 Buck Up And Drive! (I don't usually acknowledge punctuation in titles, but the exclamation point is warranted here) is a game about driving really, really fast. So fast that your speed is measured in fasts per hour. This addictive indie racing game has been available on Itch for a while now, but solo developer Fábio Fontes recently launched it on Steam and I've spent the morning absolutely hypnotised by its wild trick system, blisteringly fast speed, and ability to aggressively bonk other cars off the road. That's right: bonk.

Comparing a game to a load of other games is Easy Mode for a games journalist, but Buck Up And Drive! wears its influences so brazenly on its sleeve, it's hard not to. Classic arcade racer Out Run is an obvious influence, with its lavish globe-trotting scenery, a track that kinda unrolls in front of you, imitating that classic faux 3D sprite-scaling effect, and a focus on big, stupid drifts. You drift so hard in this game your car basically goes horizontal, and it feels amazing. The chippy music has heavy Out Run vibes too.

But it's also not much like Out Run at all. Buck Up And Drive! is actually more like an endless runner. Think Temple Run, but with cars. You accelerate automatically, and it's less about braking for corners and more about dodging traffic and hitting speed boosts, so you can make it to the end of a track before the timer counts down to zero. Hitting other cars spins you out and veering off the track slows you down, which loses you precious seconds. Make too many mistakes and it's game over when the timer runs out. 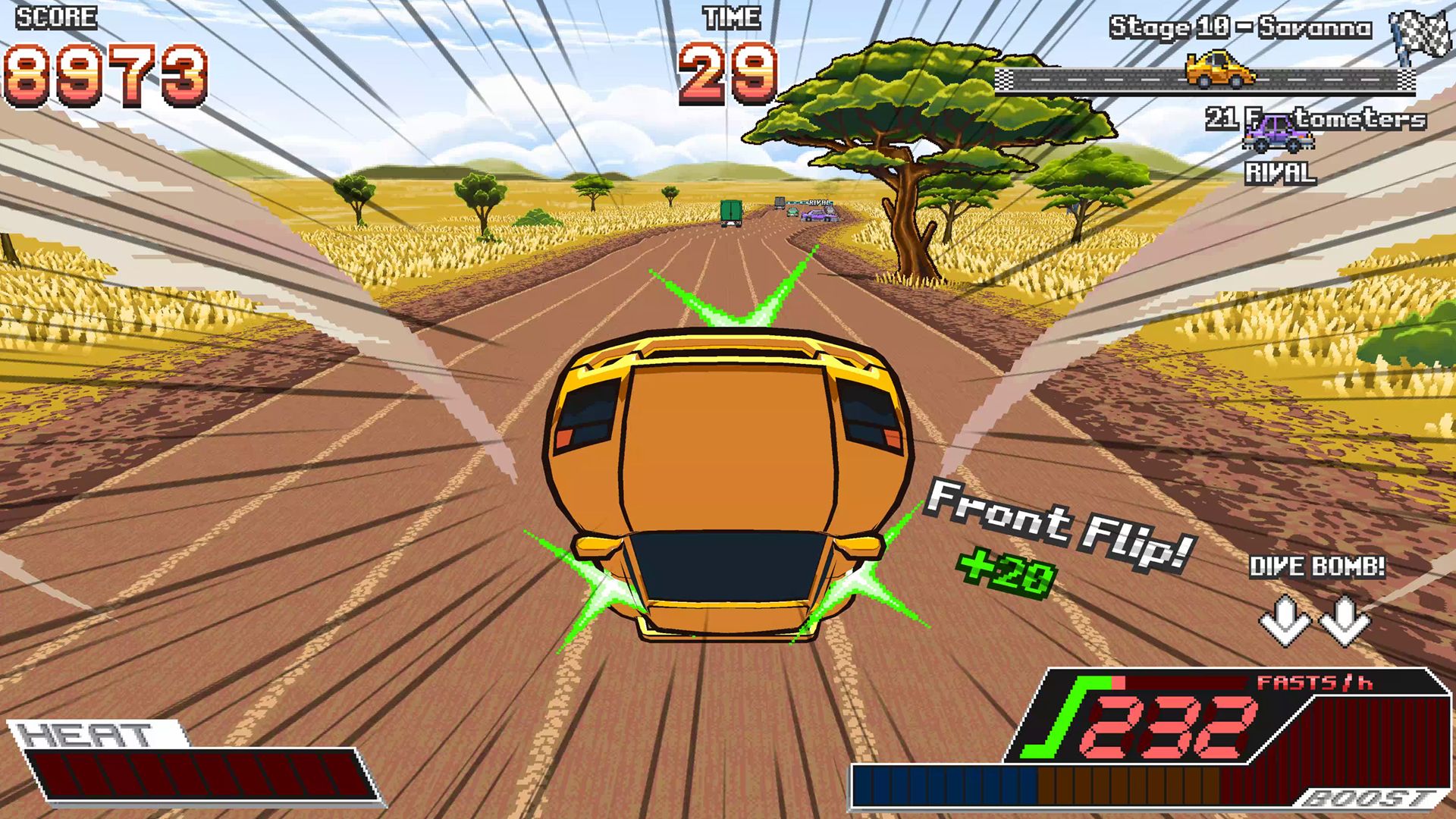 But here's where Buck Up And Drive! gets interesting. Hold a drift and coloured, anime-lookin' sparks will appear above your wheels, indicating that you can exit the drift and get a sharp burst of speed—violently knocking other cars out of the way if you ram into them, in a move the game describes as a bonk. Similar to Mario Kart, the length and power of the boost increases the longer you drift. Max your boost out and you can smash multiple cars, including regular traffic and rival racers, off the road.

Rivals appear when you hit a certain amount of points. Mostly it's just you and herds of Sunday drivers clogging up the freeway, but a rival is just as fast and drifty as you, which makes an already pulse-pounding game even more intense. Luckily you can bonk your rivals too—and even hit them with a Mario-style ground pound if you launch off a ramp and get above them. You can also turn your boosts into attacks, using Street Fighter stick twirls to unleash moves like Hurricane Boost, which theatrically destroys nearby cars.

But you gotta be careful with the bonking, because if you bonk too many people off the road, the cops will come after you. They'll bash into you relentlessly as you drive, making getting to the end of the track in time tricky. But you can bonk them as well, causing exclamations of "Oink oink!" and "ACAB!" to appear in comic book bubbles. The sheer amount of bonking in Buck Up And Drive! is out of control, but it feels super satisfying when you time it right and explode a car that's in your way out of existence. 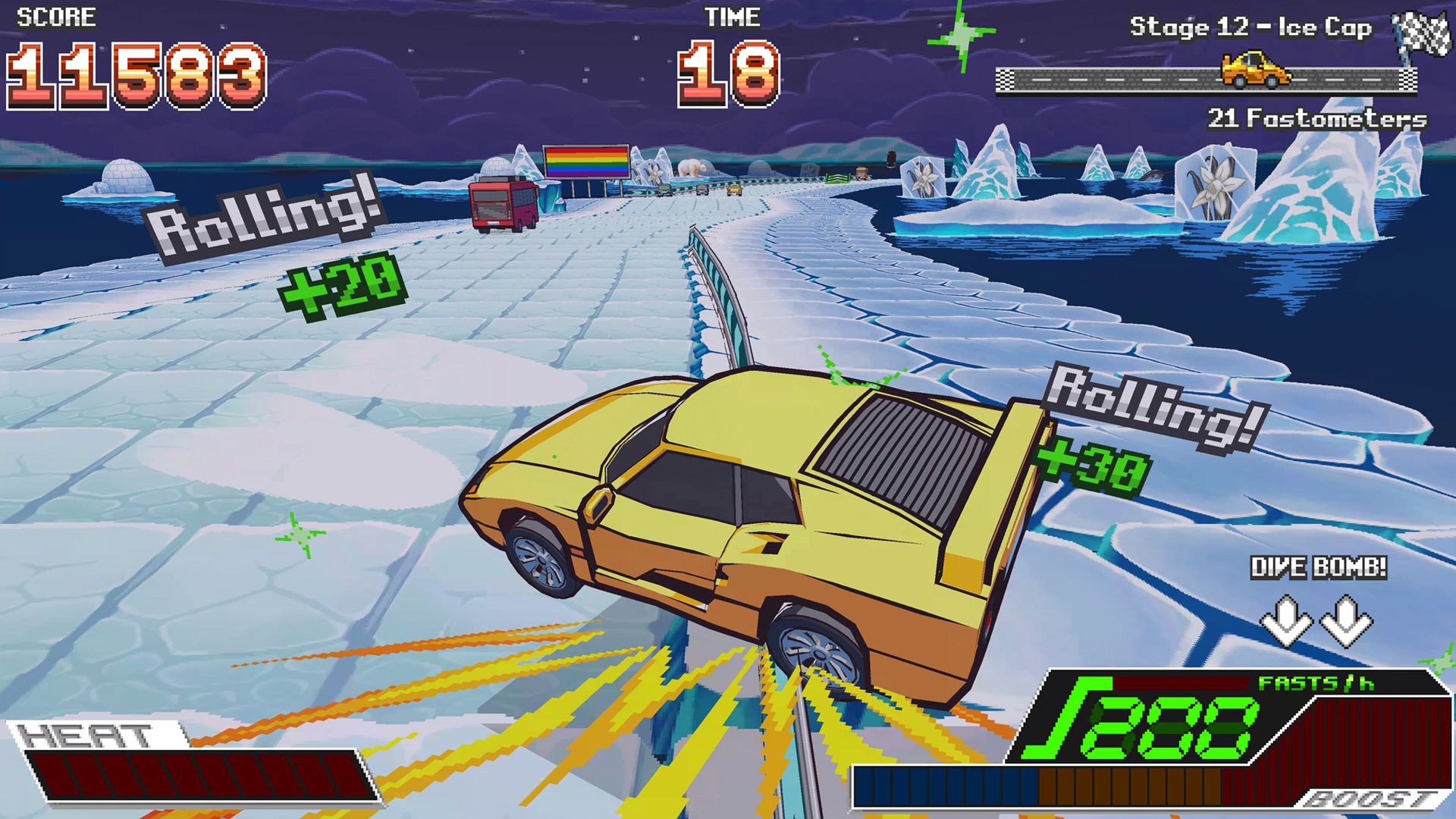 But there's more! Buck Up And Drive! also lets you pull off sick tricks, reminiscent of games like Tony Hawk's Pro Skater and Jet Set Radio. When you hit a ramp, nudging the direction buttons in mid-air triggers a selection of preposterous, physics-defying tricks. Your vehicle flips, rolls, and spins in a way no car ever should, and it's incredible to behold . Better still, land on top of the barriers at the edge of the track and you can actually grind on them, which is something I've never seen in a driving game before.

It's an outlandish fusion of genres that shouldn't work, but it does somehow—mainly because everything feels so damn good. Buck Up And Drive! is a solid, super polished game with snappy, responsive controls, a deliciously smooth frame rate, and a fiendishly addictive scoring system. It looks beautiful (with echoes of cult cel-shaded Capcom racer Auto Modellista), the music rips, and it has a brilliantly self-aware sense of humour to top it all off. For $5 it's an absolute steal, and one of the best games I've played this year.