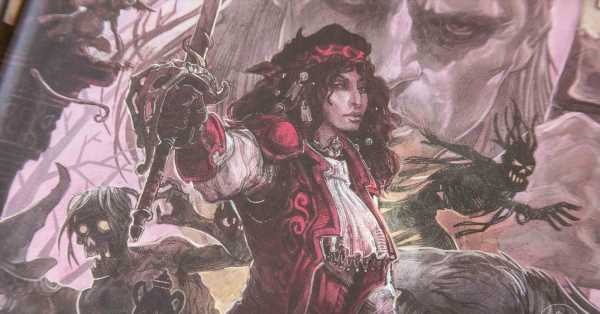 Dungeons & Dragons is undergoing an incredible resurgence in popularity, fueled in no small part by our desperate need for human interaction during these trying times. The giant machine that is Wizards of the Coast has been churning away for years now on the game’s 5th edition, publishing popular scripted campaigns that groups can pick up and play from start to finish. It’s next book, however, is quite different.

Van Richten’s Guide to Ravenloft arrives on May 18, and it has the potential to supercharge this role-playing hobby like never before. Inside this 256-page volume are nearly 40 different settings for elaborate horror-themed campaigns. It feels like getting multiple new prestige Netflix series all at once. In fact, it’s difficult to overstate just how dense Van Richten’s Guide truly is.

Somehow project lead Wesley Schneider also managed to cram in a multitude of new options for character creation, an assortment of clever allies, 32 vicious new monsters, and all the gentle guidance your group needs to run a spine-tingling campaign of your own devising safely at the table. Van Richten’s Guide is hands down the most feature-rich D&D book of this generation, and I can’t wait to see what fans do with it.

First, a little background: The classic Ravenloft adventure was first published in 1983. That slim, 32-page adventure stars a charismatic vampire named Strahd von Zarovich. The module proved to be immensely popular, spawning an entire series of horror-themed adventures loosely connected by a semi-sentient mist and a fantastical cosmology. Van Richten’s Guide reinvents some of those settings, and also adds new ones along the way.

Each of the main Domains of Dread mentioned in Van Richten’s Guide to Ravenloft includes a sidebar on creating a character from that realm. It’s a bid to give the non-player characters in these realms a kind of agency that has not been afforded in past settings.
Photo: Charlie Hall/Polygon

Each “Domain of Dread” is presented not as a fully featured campaign, but as the seed of a dark and magnificent adventure. Strahd’s land of Barovia is here, of course, with its famous vampire traipsing the halls of his deadly castle. But there’s also Bluetspur, a world of cosmic horror populated by malevolent mind flayers that will make your heroes question their own memories. There’s the feudal land of Borca, dripping with poison and intrigue, its population trapped and harried by not one but two fiendish villains. There’s the Carnival, a domain that itself wanders the mists, populated by wild performers and a powerful, living sword; the broken land of Darkon, whose central castle is frozen mid-explosion, its disparate rooms desperately trying to reassemble the whole in mid-air; there’s even a haunted train, itself its own distinct setting, plunging through them all.

My personal favorite is the land of Falkovnia, where the villain Vladeska Drakov fights an unending battle against an endless horde of zombies. Once a brilliant military commander, Drakov’s ruthless efficiency and relentless perfectionism has turned her into a tyrant. Rather than retreat and save the lives of citizens and soldiers alike, every day she rebuilds the barricades that keep death at bay. Those same walls keep her trapped within.

Each one of the settings included in this book could be the beginning of a years-long campaign. All they need are player-made characters to get them started, and Van Richten’s Guide has plenty of new tools to help players find their way.

The alternate cover, only available at your friendly local game store, features a subtle metallic finish along the edges.

Take the book’s new lineages, which include the vampiric Dhampir, the mystical Hexblood, and the semi-undead Reborn. At first glance lineages function similar to races, as templates that players can build a character around. But they can also be applied to existing characters after they’ve been built, sort of like how a punch card covers up some sections of the page below it. Some elements of your character will show through that punch card, while others will be obscured with new abilities. That leaves what was previously visible on the page to serve as background — distant memories that your character can only dimly recall.

The same goes for the Dark Gifts found in Van Richten’s Guide. Players can choose a Dark Gift at the outset, a mystical flaw that also grants them powerful abilities. Alternately, patient DMs can lay in wait, picking the perfect moment to offer a particular Dark Gift as a devilish bargain. “Time stops while a character is on the brink of death,” one section reads. “A mysterious voice offers to save the character’s life, but only if they accept its Dark Gift.” Will you choose to save your character’s life, only to be forever be cursed with a shadow you no longer control?

Alongside these kinds of damning in-game consequences comes plenty of talk about consent. Van Richten’s Guide includes an entire chapter on the concept, and fully brings concepts like the X-Card into modern D&D, even including creator John Stavropoulos among its authors. In it’s own way, Van Richten’s Guide has a mantra: Horror role-play is about scaring the characters, not the players, and every precaution should be taken to make sure that remains the case throughout.

There’s plenty more to talk about in this book, but I’d be remiss if I didn’t mention that it also comes with all the tools groups need to make their own Domain of Dread — with its own terrifying villain — from scratch. Those who enjoy rolling up new characters they’ll never actually play will enjoy scratching that same itch by rolling up their own domains. The book also includes a new adventure, called the House of Lament, that will take characters from first to third level. It serves as an excellent way to warm up a new gaming group — and new DMs — for the epic storytelling to come.

Be warned, however, that one element of a traditional D&D book is absent this time around. Of all the marquee villains listed in the book, none of them have a stat block. Not even Strahd, whose stats already exist in Curse of Strahd, had his copied into Van Richten’s Guide. It’s explained away early in the book, whose authors say that a Domain’s villain doesn’t always have to be the big bad itching for a fight. Having run a battle against Strahd and other monsters of his ilk in many game systems many times, I agree with Wizard’s bold design decision. There’s more to D&D than combat, and this omission will help to steer players toward more elaborate role-play and world building, and relieve the tension of having to maximize their own stats and magical powers to win the day.

Ultimately, it’s the little touches that really make Van Richten’s Guide special. I admire how the hand-written letters in the prologue form a single, cohesive narrative that frames its non-player characters — Ez D’Avenir, the Weathermay-Foxgrove twins, Alanik Ray, and Arthur Sedgewick — as a loving, found family of adventurers kept apart by time and space. I love how the book’s pages are printed to look like careworn bleached parchment. There’s even a Spirit Board in the appendices, a themed Ouija board that will allow players to run their own seances. The creators have shown an attention to detail and a devotion to craft that has been building throughout this run of D&D’s 5th edition.

I simply can’t say enough about Van Richten’s Guide to Ravenloft. Coming on the heels of the essential Candlekeep Mysteries, it’s further evidence that Wizards of the Coast is firing on all cylinders.

You can find the book online at retailers like Amazon, or at your friendly local game store where the special alternate cover shown above is available in limited quantities.

Van Richten’s Guide to Ravenloft was reviewed with a final retail version provided by Wizards of the Coast. Vox Media has affiliate partnerships. These do not influence editorial content, though Vox Media may earn commissions for products purchased via affiliate links. You can find additional information about Polygon’s ethics policy here.