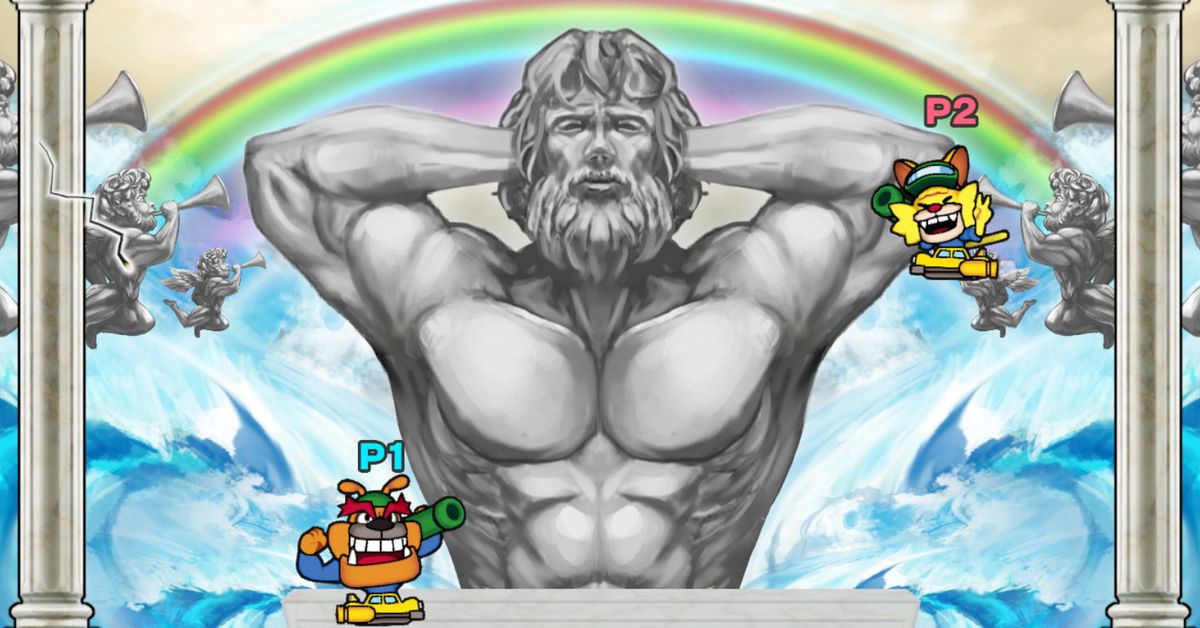 WarioWare: Get It Together! is a departure for the long running series. It’s still a game loaded with bizarre and amusing microgames — smaller minigames with simple objectives that last about 10 seconds or less — but the way players interact is completely different. Over the years, players have used buttons or touch controls to tweeze nose hairs, joust, or avoid falling arrows. But WarioWare: Get It Together! sees players control one of Wario’s crew members and manipulate the game environment via that avatar.

Get It Together! takes the series’ direct control away from players and adds a middle-man. Each of Get It Together!’s characters have a unique playstyle. Some can fly, some can’t stop moving, and some can’t even move at all.

This is a different breed of WarioWare, one where character choice could be everything.

How does WarioWare: Get It Together! work?

Wario and his pals play Daily Grind, a side-scrolling game in WarioWare: Get It Together!
Image: Nintendo

Nintendo gave me a hands-off demo for WarioWare: Get It Together! earlier this week. Our preview showcased the game and its various modes with two-player multiplayer, but many game modes — like the story — also allow solo play.

I watched as two players jumped straight into WarioWare: Get It Together!’s story mode, which should operate similarly to the WarioWare variety packs players remember. The duo jumped into what they called a “Fantasy Pack,” which included a random assortment of fantasy-inspired microgames.

Both players selected their characters — Dribble and Spitz, the cat and dog combo that work at WarioWare Inc. — and jumped into the games. Dribble and Spitz worked together to solve each microgame that WarioWare: Get It Together! spit at them. The better they did, the more quickly subsequent games sped up.

So far, this should sound familiar to most WarioWare players. But the selection of Dribble and Spitz fundamentally changed the experience. In WarioWare: Get It Together! Dribble and Spitz ride around in little buggy cars that fly through the air and shoot bullets. They’re characters built for co-op and designed to go together; one of their cars is always facing right, and the other is facing left. Because of their locked-in directions, that meant that sometimes the left-facing player couldn’t do anything to solve a microgame, while at other times they were essential to clearing a game quickly.

Other game modes we saw offered similar revelations. One longer microgame, Daily Grind, is just a scrolling screen where players need to work together to collect contracts and reach the other side. Players get points for finding power-ups that change their player character, which causes the entire process to quickly devolve into chaos. Some characters, like 9-Volt, are constantly skateboarding, so the player controlling them has to be careful not to roll their way into enemies. Other characters, like 18-Volt, can’t move on their own at all, and need to attach themselves to pull strings in the environments using projectiles. Daily Grind is a simple, repetitive game, but those characters will have fundamentally different experiences playing it.

As we hopped between each game mode, WarioWare: Get It Together!’s character-based philosophy affected every part of the experience.

How do the WarioWare characters influence the formula?

Some characters will excel at this microgame, while others might struggle
Image: Nintendo

The idea of a drastic change like this probably has a few old-school WarioWare fans squirming in their seats. But each of WarioWare: Get It Together!’s microgames are built with the roster in mind. Some microgames may be easier for some characters and harder for others, but every character can complete every game, Nintendo said.

The change to character-specific gameplay promises to change the mindset players go into new microgames with, but that’s not necessarily a bad thing. Going back to old WarioWare games, it’s not always clear how you need to interact with a microgame until you’ve already lost it. So success can feel like memorization, knowing you need to hit a specific button to make the horse go, rather than waiting for it to start naturally.

WarioWare: Get It Together!’s characters could potentially hurt the sheer diversity of microgames, but should also cut down on the confusion. Each character has the same controls for every microgame, even if they interact with them differently. Players will need to learn the ins and outs of each character to master their playstyle, but should have an easier time winging microgames they’ve never seen before.

Perhaps the most compelling aspect of WarioWare: Get It Together!’s character selection is for veterans and players who really want to push their skill. Toward the end of our preview, the two Nintendo representatives selected a specific microgame from the Play-O-Pedia — a collection of all the microgames players have unlocked that loops over and over for fun, high-score, or practice.

The duo selected a microgame all about escaping an underground compound and getting into a helicopter, with each player needing to hit a button to let the other out. It’s a microgame set in tight spaces, and requires precision to succeed. But the folks from Nintendo selected a pair of ninja characters called Kat and Ana, who come with one very specific quirk: They’re always jumping.

Each run through the microgame was chaos. Both players were bouncing everywhere they went, bumping their heads on the ceiling or missing the exit doorway by half a second. But the two found a rhythm and finished the microgame over a dozen times. Once they finally ran out of lives, WarioWare: Get It Together! gave them their Kat and Ana-specific high score for that microgame.

The experience of setting your own goal and eclipsing it through sheer bedlam feels authentic to WarioWare, even through all the character-specific differences. Change can be scary, especially for a series this beloved that’s been around since the Game Boy Advance. But Nintendo is keeping the series’ chaotic roots intact while also attempting something new.

Nintendo recently launched an eShop demo so players can Get It Together!’s changes for themselves. It will officially launch WarioWare: Get It Together! on Sept. 10, exclusively for the Nintendo Switch.