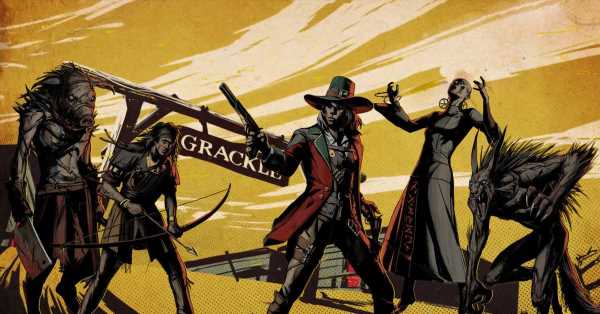 I wake from my bed in the middle of the night, startled by noises outside. Resting next to me on the bedside table is an old oil lamp. I pick it up, hoping to shed some light on the situation, but I miss-click, and suddenly my avatar hurls the lamp against the wall. It shatters, spreading fire across the little wood cabin. The bottle of whiskey on the table ignites and the wooden chairs shatter, while fire crawls up the curtains and through the window, catching the chicken coop just outside. I hear a few loud squawks and see a fatal burst of feathers as I stand in the middle of the chaos, being slowly licked to death by the flames of my own stupidity.

Ah, this is one of those games, I think. Like Disco Elysium’s fatal tie incident, except with physics and chemistry and propagating fire.

This is the first game from the newly founded WolfEye Studios, whose co-founder, Raphaël Colantonio, worked as a creative director on Dishonored, Prey, and more at Arkane Studios. In other words, systemic chaos is to be expected. Like Dishonored, Weird West is a real genre-bender, mixing the open wilderness and gunslinging Western with horror and fantasy. There’s “frontier justice” and duels at high noon — but there’s also witches, werewolves and vampires.

While Weird West comes with plenty of systems and simulations, at its heart this is a familiar computer RPG rather than some spectacular new translation of the immersive sim. Think of Larian Studios’ recent Divinity games, where you can pick up almost every object in the world, set elements ablaze (in real time), and sneak around and pickpocket people. Weird West also comes in a slightly more condensed package — the world feels far smaller and less cohesive than many big RPGs, instead being split up into smaller locations that you travel between on a map.

The story of Weird West works as an anthology. There are five characters, who you play in sequence, each with their own story to unravel and specific problems to solve: a bounty hunter whose husband has been kidnapped by a powerful fleshing-eating entity; a hogman hungry for revenge after their horrific transformation; a young Anishinaabe hunter defending his home from the spirit of greed; a werewolf; and finally, a witch. Bridging each of these distinct chapters are several recurring characters — a strange young girl who speaks in riddles, a wandering witch who plays games with you, and a bounty hunter obsessed with immortality and bad jokes.

Each life lived spills over into the next chapter. If you liberate a monster-infested ghost town as the bounty hunter, it’ll be a bustling place with shopkeepers and a saloon when you return as the hogman. Similarly, if you go on a huge robbery or killing spree, that place will be empty except for an overflowing graveyard. Previous characters also persist in the world after you’ve finished playing them, hanging about ready to be recruited into your posse.

The overarching plot eventually sees your five avatars pulled together into a big showdown that takes your previous lives into consideration. This is typical of computer RPGs, where there’s such varying complexity in the earlier stages, all that can be mustered by the end is a cold, calculative summary of your actions. While the overlapping structure of five different characters living within one world is ambitious, Weird West struggles to coalesce. It ends up feeling a bit limp.

And if the main story is disjointed but ambitious, then the side quests are a genuine letdown. The map is huge, with hundreds of locations that will pop up as you travel across the wilderness, but a lot of these places end up feeling samey — content to blast through, rather than tales to savor. Random encounters never feel anything more than frivolous, and even the best side missions never get weird enough. I was hoping for something more in the vein of Lovecraft and Weird Fiction — Dishonored’s talking rats, sentient hearts, and magic whales, for instance. It turns out that the Weird West isn’t all that weird.

I must have explored dozens of underground mines over the course of the game, and even more caves and ancient ruins, each using the same “mysterious” architecture. While there’s some neat level design with secret rooms and side entrances, too many of these levels feel like they’ve all been constructed from an extremely limited tileset. The visuals — a dark comic-book style that feels a bit like a washed-out Mike Mignola — also doesn’t quite pop in-game the same way it does in the character portraits and animated cutscenes.

Disappointingly, standout locations are few and far between. Of the ones that feel more bespoke, there’s a big brothel brimming with red velvet curtains and furniture, reminiscent of The Golden Cat from Dishonored. While you don’t have the same architectural intricacy of a big first-person immersive sim, in Weird West’s larger levels you’re able to climb up roofs and over balconies, and use ropes to abseil down through glass ceilings. Some of my favorite moments in the game revolved around the challenge of infiltrating manors or robbing banks to power-up my crew early on in the playthrough, when dozens of gold bars and a legendary six-shooter made it seem as though I was cheating. This kind of “sequence skipping” is what I enjoy most about the immersive sim genre. Weird West isn’t too bothered about balancing difficulty. It’s rough around the edges and doesn’t mind its players experimenting, and even accessing late-game equipment too soon (courtesy of a few quick-saves, of course).

While there’s fun to be had in infiltration, stealth doesn’t really ever stretch beyond its basic functionality. You can initiate takedowns on unsuspecting enemies, and you’ll need to hide bodies from patrolling guards, but apart from that the stealth toolset is barebones, and it can be tiring work clearing a camp. It’s a long way from the brilliant espionage of something like Mimimi Games’ Desperados 3. Of course, unlike a tactical stealth game, Weird West has its combat to fall back on. While Desperados will have you reaching for the quick load after you’ve been caught in the open, Weird West is — much like Dishonored before it — at its very best when you let loose.

While you can give yourself various percentage-based boons and buffs (and there’s a skill set for each weapon type in the game), it’s the character specific abilities that are most impactful, and most interesting — the beefy hogman can become bulletproof, poison the air, and generally charge around the place causing chaos. It fits with his general demeanor, and more importantly, encourages you to trial a different playstyle. On the other hand, there’s a definite downside to locking abilities to specific characters. It would’ve been nice to have access to teleportation with the first or second character, instead of just the last. I’d also have appreciated the ability to mix something like the hunter’s tornado spell with my fiery, exploding hogman. For a game so keen on letting you experiment, not letting you mix and match abilities seems like a major oversight.

Weird West has a couple of other cool combat tricks in its arsenal. Every time you do a dive roll whilst aiming, the game temporarily turns into Max Payne — it slows the action down and lets you be a bit more tactical with your next move. But perhaps the greatest addition to combat is the kick. Ripped straight from Arkane’s old Dark Messiah of Might and Magic, the move is bound to be a crowd favorite, as it makes the most out of all the interlocking systems and the fact almost everything in the game can be moved and weaponized at a great force.

Levels are littered with explosive barrels, oil puddles, and other environmental dangers. It’s here, when the mayhem ensues, that Weird West feels most like a good immersive sim. Your brain fizzes with ideas on how you can maneuver things just so, kick this or that object, mix water with electricity, or fire with poison. There’ll be plenty of times when things don’t work out, or it all backfires and you end up burning yourself to death in a tiny wood cabin, but when it does all come together? It feels like magic.

With Weird West, these magic moments appear far too infrequently. Sheer ambition means eventually something special is bound to be spat out by the game’s extensive simulations — a mishap with an oil lamp, for example — although it’ll be a rough and unwieldy thing, all the more crude when compared with the extensive elegance of a Dishonored. Instead of doing what many, myself included, had hoped — converting the spirit of Arkane and the immersive sim into an inventive top-down form — Weird West has stumbled into a more mundane existence as a pared-down computer RPG that’s nowhere near weird enough.

Weird West will be released on March 31 on PlayStation 4, Xbox One, and Windows PC via Game Pass. The game was reviewed on PC using a pre-release download code provided by Devolver Digital. Vox Media has affiliate partnerships. These do not influence editorial content, though Vox Media may earn commissions for products purchased via affiliate links. You can find additional information about Polygon’s ethics policy here.

A weekly roundup of the best things from Polygon

Please check your email to find a confirmation email, and follow the steps to confirm your humanity.