On a sweltering North Carolina afternoon, my friend Yuki and I piled into Chris’s dorm. I’d never really hung out with Chris, but I’d seen him around, and we were into the same scenes – he seemed cool. This was my first real chance at getting to know him, and I wanted to make a good first impression.

But the three of us being the awkward lot we were, we just sat around in Chris’ room, making small chit-chat while Chris’ monitor sifted through dozens of live anime wallpapers on a shuffle. After Chris found out I was into Demon’s Souls, the three of us started riffing on difficult games, and started trading horror stories about the toughest ones we’d played. I Wanna Be The Guy, Kaizo Mario, TouHou… we gushed over our triumphs, our defeats, and everything in between.

That’s when Chris smiled and asked, “hey, have either of you heard about that Winnie The Pooh baseball game?” 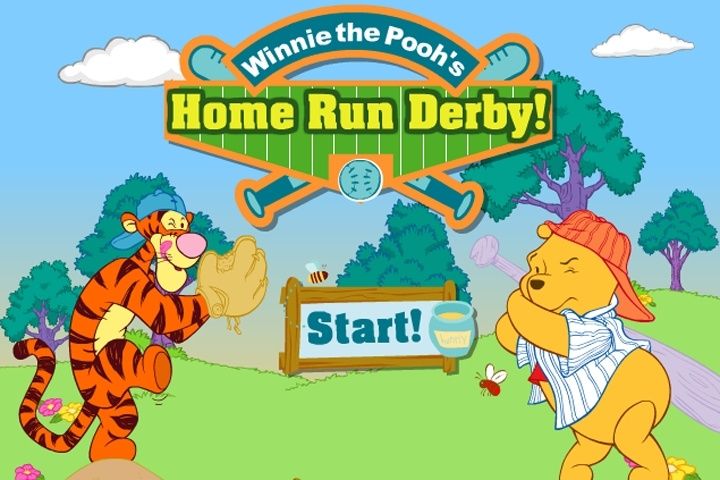 Winnie The Pooh’s Home Run Derby is the stuff of legends.

Released with no fanfare whatsoever in 2008, the Japanese Yahoo! Kids Flash game went mostly unknown for several years. After all, how many people are going to engage a Pooh flash game based in good faith, let alone the fabled “core gamer” demographic? But in 2012, that exact demographic got their hands on the game. 2Channel netizens dug up the title, then started posting brag about their wins in the game. Picking up on just how weird that flex was, commenters and lurkers alike flocked to the game, hoping to make sense of the posts.

That’s when it became clear that something was a bit… off with this game.

Ostensibly a game for children, the 2D baseball freeware seems like an innocuous and cheap little cash-in. As Winnie The Pooh, children are tasked with guiding a bat with their cursor, then clicking when the ball comes in range. Sounds simple, yeah? Unfortunately, it’s anything but – Home Run Derby is a hellish exercise in futility, the likes of which I’ve rarely seen in this medium. As somebody who suffers from extreme depression, I can say with full sincerity that this game is the most accurate reflection of what my deepest lows feel like. 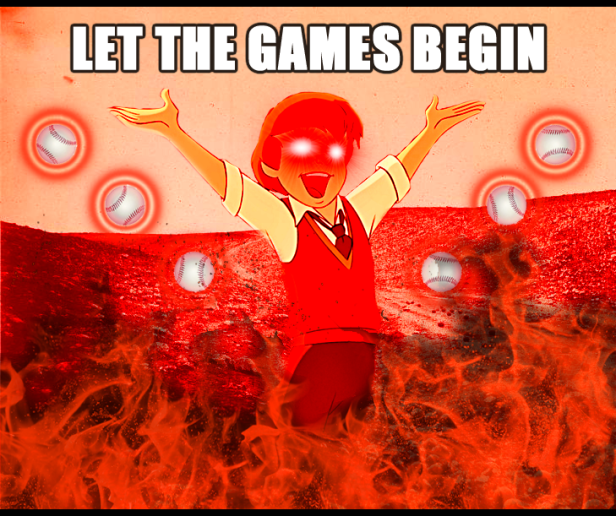 Almost single pitch in this game feels like an insult. Your initial square-offs with Eeyore and the Heffalump seem fine – tough, precise, but fair. But when Piglet hurls his first curveball at you, it’s clear that you’re in for a bad time.

Welcome to The Many Deaths of Winnie The Pooh.

Every character after those initial rounds is a gleeful agent of malice and cause of suffering. Rabbit’s throws slow down and speed up with seemingly no warning. Owl’s zig and zag in rapid succession, making it almost impossible to chart their trajectory. Tigger’s just fucking disappear, making it feel like a fool’s errand to even try and figure out where you’ll hit. One by one, your favorite cuddly friends turn tail on you, cruelly smiling as they prolong your suffering with each godawful round.

Then there’s the architect of Pooh’s pain – Christopher Robin himself. Christopher Robin is not only an amalgam of every foe you’ve vanquished thus far, but an exacerbation of their cruelest acts. The silly old bear’s owner’s pitches not only copy every foe’s, but are executed with the type of speed reserved for breaking the sound barrier, not playing baseball. Squaring off against him is a fate I wouldn’t wish on my worst enemy, and one that I hope to never be faced with again.

Suffice it to say? Winnie The Pooh‘s Home Run Derby is tough. Very tough. Tougher than any game I’ve played, I think. Cruel enemy design coupled with bad workmanship produces a game that feels designed to punish children and strike fear into every mortal heart.

Take Me Out With The Ball Game 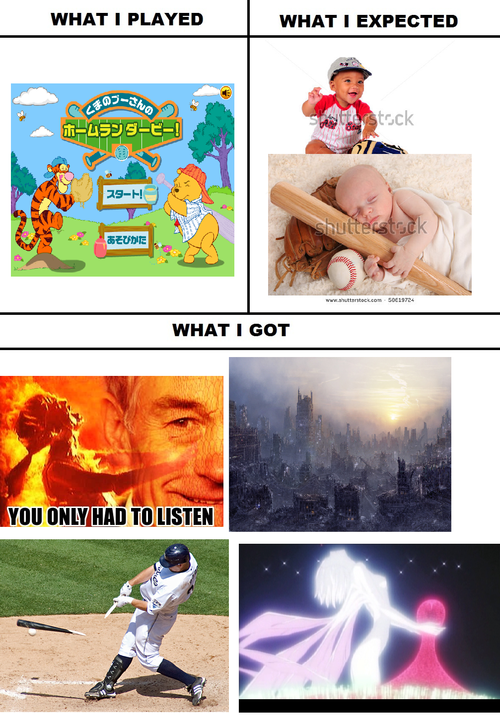 Eight hours. Eight straight hours we spent, crammed in Chris’ apartment, trying to throw our combined weight behind this Sisyphean task. And after those eight hours, each spent screaming and cursing more than any of us knew we could, we carried our broken bodies to the local diner. Phyllis, our usual waitress, noticed how tired and distraught we looked, and asked what we’d been up to.

“Baseball, huh?” she mused, before shrugging and passing our order to the cook.

The three of us looked at each other, then stifled laughter.

After the late dinner, we felt rejuvenated and revitalized – but not ready to dive back into the Pooh mines. Instead, we decided to take our collective fury at AA Milne out with a night of concentrated pranks and acts of casual destruction. We hit the streets of Greensboro, North Carolina with wounded masculine pride and a shit ton of cheap noisemakers, spark fountains, and smoke bombs.

With a 30 dollar pack of fireworks we’d split between us, we were going to blow off steam at Christopher Robin’s sheer existence.

From 10 PM to 6 AM, we roamed the streets of Greensboro with fireworks, raising hell in the way that only stupid teenagers can. Spark showers next to the dorms. Smoke bombs on the sidewalks. Firecrackers in residential parking areas. We didn’t break or burn anything, or hurt anyone for that matter, but that didn’t stop more than a few local authorities getting called in. Throughout the night, we ducked through nearby forests, hid in nearby sewers for cover, and took cover behind cars in nearby parking lot. All but one of us being marginalized, we were all deathly afraid of the consequences… but not afraid enough to stop.

At around 6, the local shops began to open. Our stash of firecrackers was depleted, our thirst for malice slaked, and our evasion of the local authorities completed. Delirious, we ambled back into the diner for an early breakfast – taking verbal note of the two squad cars in the parking lot as we did.

To our surprise, Phyllis was still on her shift at the dinner

“Y’all haven’t been up this whole time, have you?” she scoffed.

“Were you still playing baseball?”

The three of us looked at each other, then smiled. 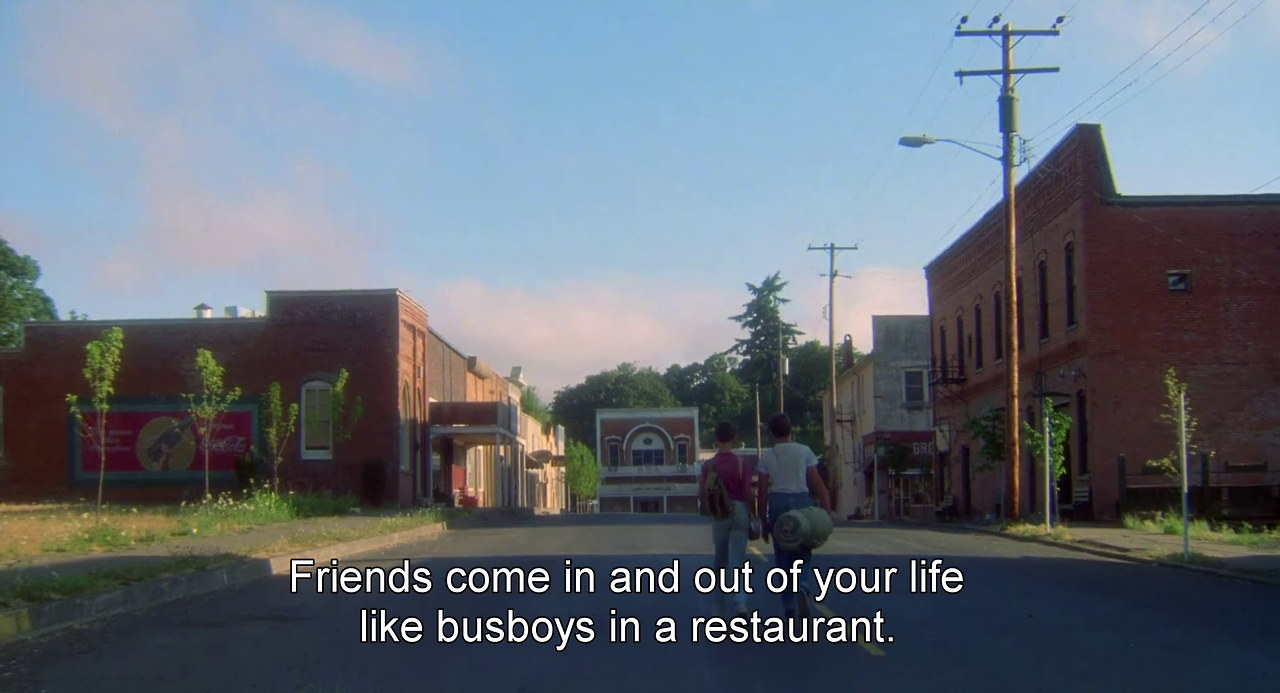 That fateful day with Winnie The Pooh’s Home Run Derby changed everything. That summer, the three of us continued to hang out and get into all kinds of dumb stuff. Getting lost in the nearby woods, climbing nearby schools, sneaking around private property, and plenty more I won’t share here. It was those big, dumb, crazy summers you see movies about, but that never seem to actually happen. Through it all, the three of us grew closer, and during that time, it seemed like we’d be friends for life.

But life went on. My abusive ex (yes, yes, the one that raped me,) stoked a lot of anxiety about Chris and Yuki in me, and not wanting to sacrifice my relationship, I caved and stopped hanging out with them. We grew more distant with each passing month, and by senior year, there was a very clear awkwardness between all of us. I’m not sure that, even if we started talking now, things would be the same.

Time has also taken its toll on Home Run Derby itself. With Flash now rendered all but irrelevant to modern companies, Adobe will be discontinuing it across all platforms. It will be pulled from all major sites and, faster than we may even realize, will be rendered a forgotten relic of the internet’s past. To capitulate to that, Yahoo! Games announced that Winnie The Pooh’s Home Run Derby will be delisted in December 2020.

In three months, the web page that sparked one of the most brief and wonderful friendships in my life will be no more. Yet there’s something that time can never take from us. Time can never steal those hours spent together, cursing Tigger’s name to the heavens and praying for deliverance from Christopher Robin. What we had in those moments, and in the short span of weeks that followed, was truly beautiful.

While the world may forget Winnie The Pooh’s Home Run Derby, one thing is for certain: the three of us never will.