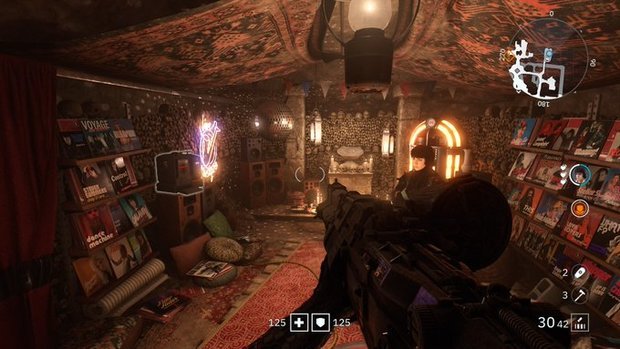 The adventure starts with the two girls, as well as Abby, the brains to the twin’s brawn, flipping their mothers the bird and flying to France to find the missing BJ. They come across Parisian resistance fighters who are willing to help them, but only if the twins are willing to scratch their back first. So, you go do some important things, then return to your base in the Catacombs and away you go into the open world of Nazi-occupied Paris.

Only, it isn’t quite as open world as you’re made to believe. The game is broken up into sections of Paris where you’ll be given side-quests and ‘actions’, quests that Abby gives the twins in order to help the Parisian resistance. Gaining these actions almost felt as if this was a subtle way for MachineGames to say ‘no, this certainly isn’t our way of expanding game time by grinding your way up to higher levels’.

It wasn’t subtle. At all.

Grinding in games isn’t necessarily a bad thing, but for Wolfenstein? I could not think of a worse thing to add to make a game that prides itself on killing Nazi’s yes, but showing the humanity of those left behind to witness the regime in the first place. Instead, the story and the girl’s growth feels tacked on, leaving only an absolute mess of a grindfest that stops being fun after a few hours of playing by yourself and realizing that slowly gaining EXP is about as rewarding as watching paint dry.

Playing by myself was a huge bust as, despite the AI’s best efforts, Jess would often stand right in front of huge boss enemies and just shoot at them with her pew pew gun. She would valiantly take them all on, chipping away at the enemies armour only to be obliterated by death beams, machine guns and Nazi hound teeth. It was sad to watch, and even sadder when I had to risk my own life to get her back in the game, only for her to die the moment my back was turned to get to a more strategic position.

So the next course of action was to, of course, enlist a few friends to take turns in playing with me, as well as joining up with random strangers on the internet to get the full ‘buddy’ experience. This was the part where Wolfenstein: Youngblood finally began to show its appeal as a co-op shooter. Often my friends would sit back, examine the battlefield and decide on our course of action instead of going in my usual way of guns blazing.

We’d take care of the goons as silently as possible, often hunting for the lone Commander who would trigger a system alert and then tearing through the rest. It was satisfyingly brutal, and with fantastic gunplay, it was gleeful to be two badass women turning Nazi’s into gore and mess.

Teaming up with complete strangers didn’t always have that same approach, and often I’d find myself tentatively asking on the mic what they wanted to do but got nothing in return. It was rare to find the same synergy in playing co-op, but perseverance and a few exchanges of ‘pep emotes’ (the sisters throwing a thumbs up or horns at one another) at least helped with feeling less alone. Still, playing with friends is always going to be more personalized to your preference. 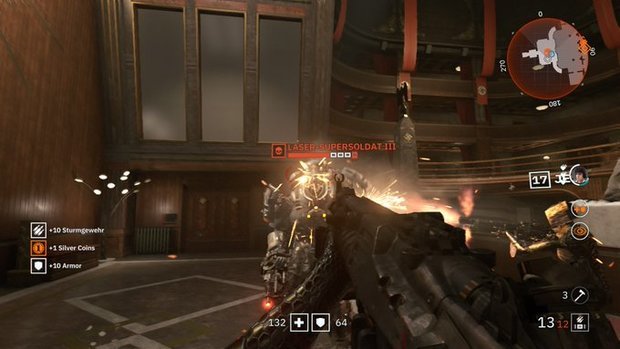 Being sneaky was also a way to explore the world of Nazi-occupied Paris in more detail. The Wolfenstein series has always been great at letting you explore what’s happening in the world as you play, and Wolfenstein: Youngblood is no exception to this.

The level design is nothing short of brilliant, with the twin sister’s power suits offering more mobility than the previous games. Now you can double jump and get onto ledges, sneak into apartments through an open window and jump down to take enemies by surprise.

Alternatively, you can head down into the sewers where tight corridors and the near-suffocating darkness brings a thrilling atmosphere that makes gunfights phenomenal. Whatever you want to do, it’s mostly fair game.

Yet it is the people in Wolfenstein: Youngblood that piques my interest. At one point, I was exploring an apartment that belonged to a Nazi band, looking at the way they live with their messy clothes sprawled everywhere, with food and cans scattered on the floor.

Later on I’m exploring the Catacombs, the home of the Paris resistance, moving my way through bones and skulls where I spot a letter on one of the leader’s, Juju’s, desk. She speaks of loving a woman who, despite everything, the loss and pain, fought back against the Nazi’s. She wonders why she fought back.

Yet regardless of it all, she says she loves her still. It’s a beautiful, but haunting read, and the detail of life and love in a game with so much death is a perfect reminder of what makes Wolfenstein a series to remember.

And as you step away to explore more of what’s left of the resistance, to understand more about the living that makes their quarters alongside the dead, you discover a desk where you can participate in daily and weekly challenges and the illusion is broken once more.

These grinding mechanics can be ignored if you so wish, but the inclusion of them in the first place to help with earning money for cosmetics and upgrades is an altogether uncomfortable one. If you want everything, you’ll either need to spend more time completing ‘actions’ or dip into your wallet.

Not even grinding with friends, or the twin sister’s goofy antics can make these kinds of mechanics fun. In a very different game, the twins would have met characters like Fergus or Wyatt or someone that actually mattered in the grand scheme of things, but this is Wolfenstein: Youngblood and the twins’ story feels like it wasn’t given the attention they deserved beyond hating Nazi’s and being BJ’s daughters. To be frank: they deserved better.

Even as you strive forward with different weapons and throwables onto another area, only to turn back later on to fight the same old enemies again and again, it feels pointless. Enemies rarely change, and no matter how much you upgrade your weapons and cosmetics, there doesn’t feel like a reward that makes Wolfenstein: Youngblood worth playing beyond new faces and a compelling, but ultimately tired, world. 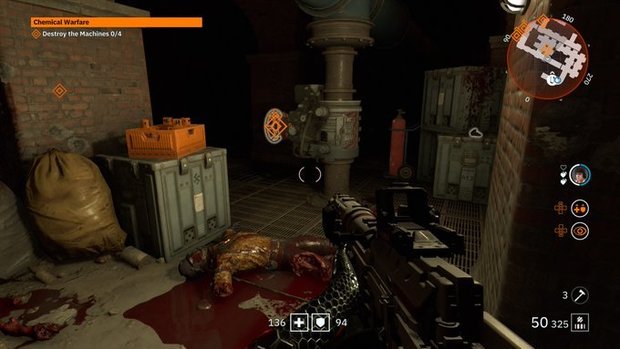 Wolfenstein: Youngblood is a game that is great for shooting Nazi’s with a buddy, but is bogged down by frustrating grinding mechanics, a poor narrative and an uninspired cast of characters that feel complacent and bland.