The good news? Checking your PC’s graphics card temperature is dead simple. The bad news? Windows doesn’t offer an easy way to do so by default, so you’ll need to download third-party software. Fortunately, all sorts of free GPU monitoring tools are available, and many of them can help you check your PC’s CPU temperature, too.

How to check your graphics card temperature 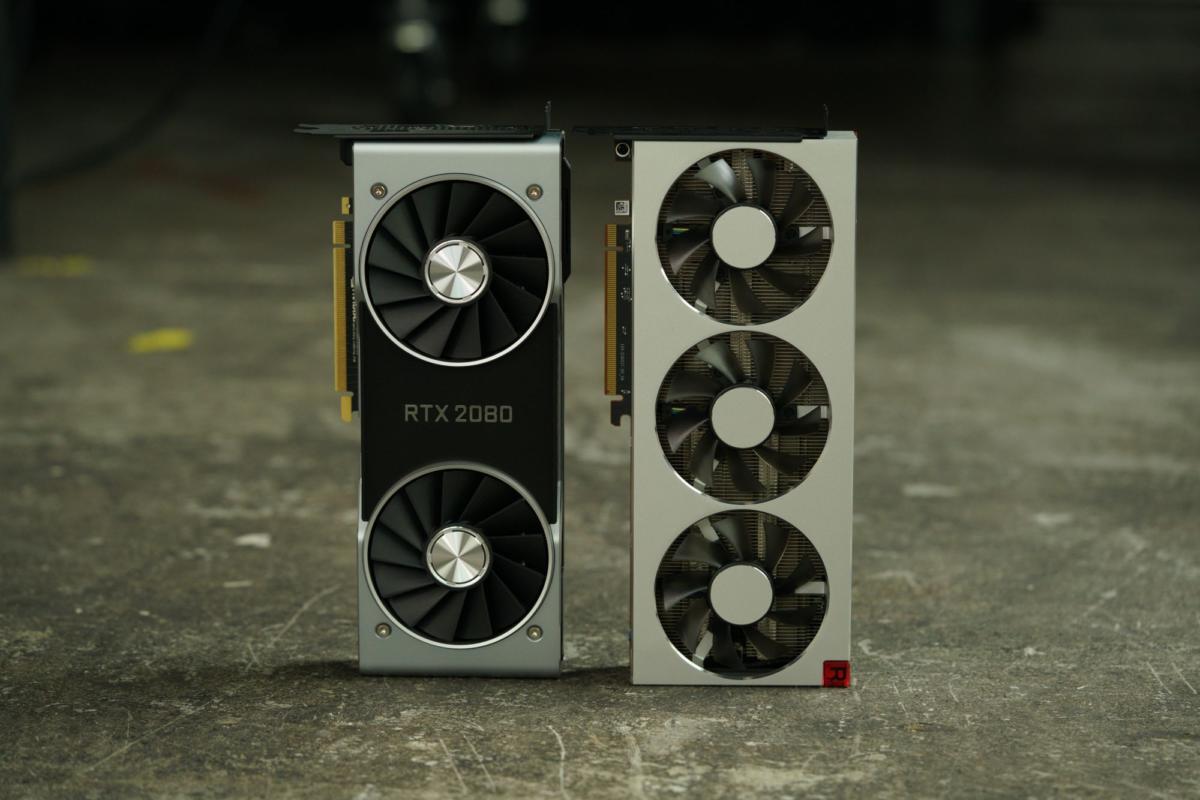 If you’re running an AMD Radeon graphics card with an up-to-date version of the Radeon Settings app, this is simple. In 2017, AMD added the Radeon Overlay, which provides handy-dandy tools to tweak your game’s visual settings when you summon it. It also includes a Performance Monitoring tool that displays your GPU temperature and other crucial information while you’re playing games.

What if you’re not actively playing a game? You can still check your Radeon GPU’s temperature by wading into the Wattman overclocking tool in Radeon Settings. Right-click on the Windows desktop, select Radeon Settings, and then head to Gaming > Global Settings > Global Wattman. After promising not to blow up your graphics card if you apply a wild overclock with the tool, you’ll gain access to Wattman, which tracks GPU temperature and other key statistics in graph form. Done!

But what if you aren’t packing Radeon hardware? Nvidia’s GeForce graphics comprise a whopping 75 percent of all GPUs in gaming PCs, according to the Steam hardware survey, and Nvidia’s GeForce Experience software doesn’t offer GPU temperature monitoring. That’s where third-party tools come into play. 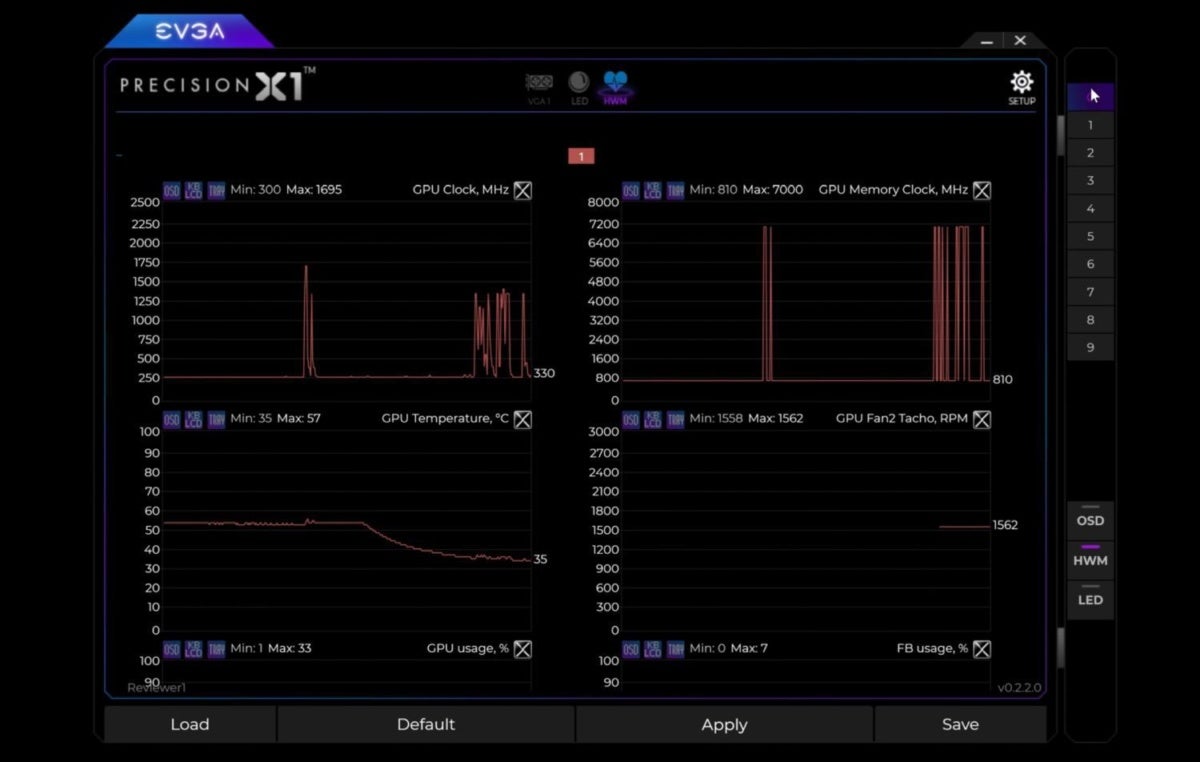 EVGA’s Precision X1 lets you check your GPU temperature either in-app or via an on-screen display while gaming.

If you prefer a more polished-looking app, we adore EVGA’s Precision X1, which was overhauled from the ground up for the release of Nvidia’s new GeForce RTX 20-series graphics cards. It’s seriously slick, though EVGA’s software only works with Nvidia-brand graphics cards.

You’ll need to dive into the settings options of each of those programs to activate and fine-tune their OSD performance monitoring tools, which prove very helpful indeed when you’re trying to dial in an aggressive overclock. As with AMD’s Radeon Wattman, you can also open Afterburner and Precision X1 outside of games to check your graphics card’s temperature outside of games.

What if you’re not a gamer or don’t care about checking your GPU temperature in-game? Then you’ll want to install hardware monitoring software that taps into your system’s temperature sensors. HWInfo is our go-to monitoring program, because it provides a snapshot of virtually every aspect of your PC (click the Sensors icon to see temps), but SpeedFan and Open Hardware Monitor are solid options, too.

If the sparse, information-dense look of those enthusiast-focused apps don’t work for you, NZXT’s superb CAM software performs the same task, even if you don’t have any NZXT hardware in your PC. It offers a clean, straightforward aesthetic and a handy mobile app for remote monitoring, but you’ll need to create an account to use CAM.

There’s no easy answer; it varies from GPU to GPU. Google is your friend. Most modern chips can run at temperatures in the mid-90 degrees Celsius, though, and you’ll often see them hit those temperatures in gaming laptops. In desktops, however, a graphics card running at 90-plus degrees is screaming for help. In single-GPU systems with decent airflow, your graphics card temperatures shouldn’t wander above the 80-degree range. Custom graphics cards with multiple fans often hover in the 60s and 70s, even under full load, and water-cooled GPUs can run even cooler. 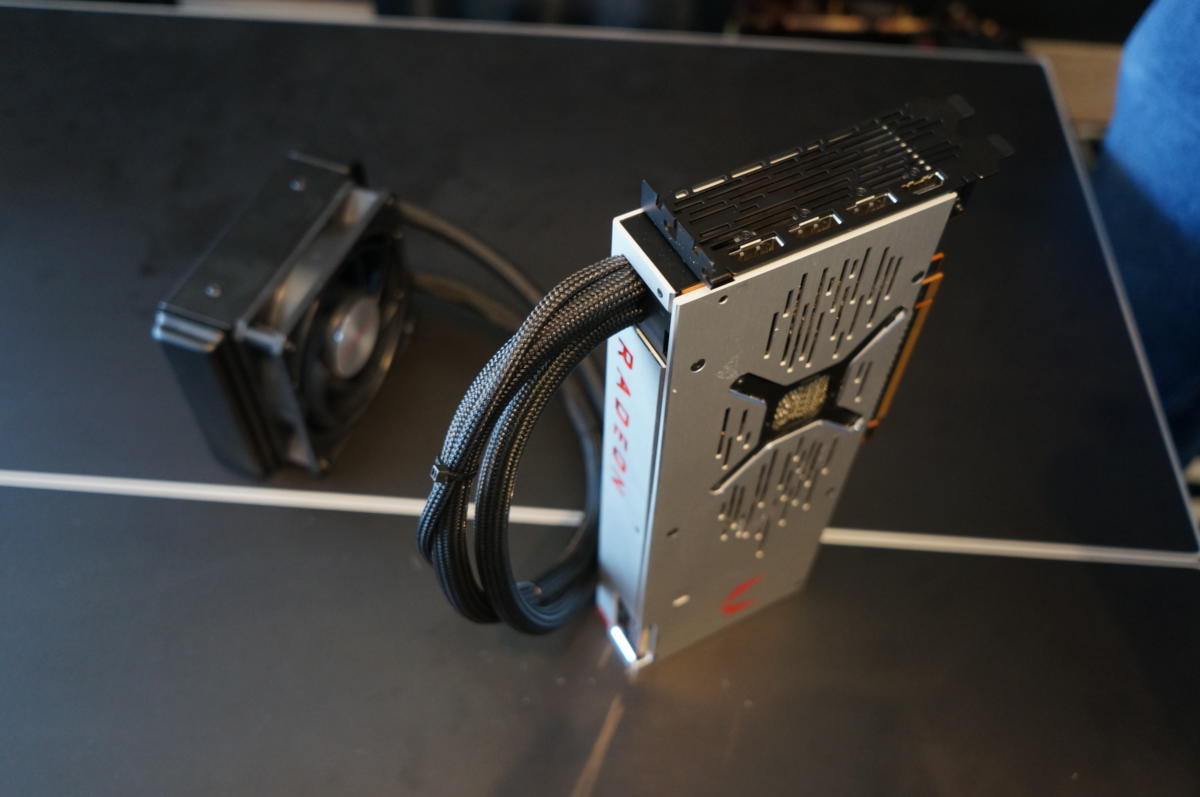 Some graphics cards, like this iteration of the Radeon Vega 64, include integrated closed-loop liquid coolers for even cooler temperatures.

If your graphics card was released in the last five years and runs hotter than 90 degrees Celsius, or you’ve observed a steep incline in your GPU temperature over several weeks or months of monitoring it, consider taking steps to help cool it down.

How to lower your graphics card temperature

If your graphics card temperature runs hot, there’s not much you can do to improve it aside from paying for hardware upgrades. But before you invest more money into lowering your GPU temperature, make sure that you really need to. Again: Graphics chips are designed to handle hot temperatures. If your PC isn’t shutting down in the middle of intense gaming or video editing sessions, you probably don’t have much to worry about.

First, double-check your system’s wiring to make sure the GPU is getting good airflow from your fans. Assuming your PC isn’t a rat’s nest of cables, you’ll likely need to consider adding more fans to your case to improve airflow. Every PC should have at least intake and outtake fans for optimal performance, and that goes doubly so for gaming PCs. You can find basic case fans for under $10 on Newegg, or swankier models with features like RGB lighting and mag-lev suspension for much more if you want to get fancy. 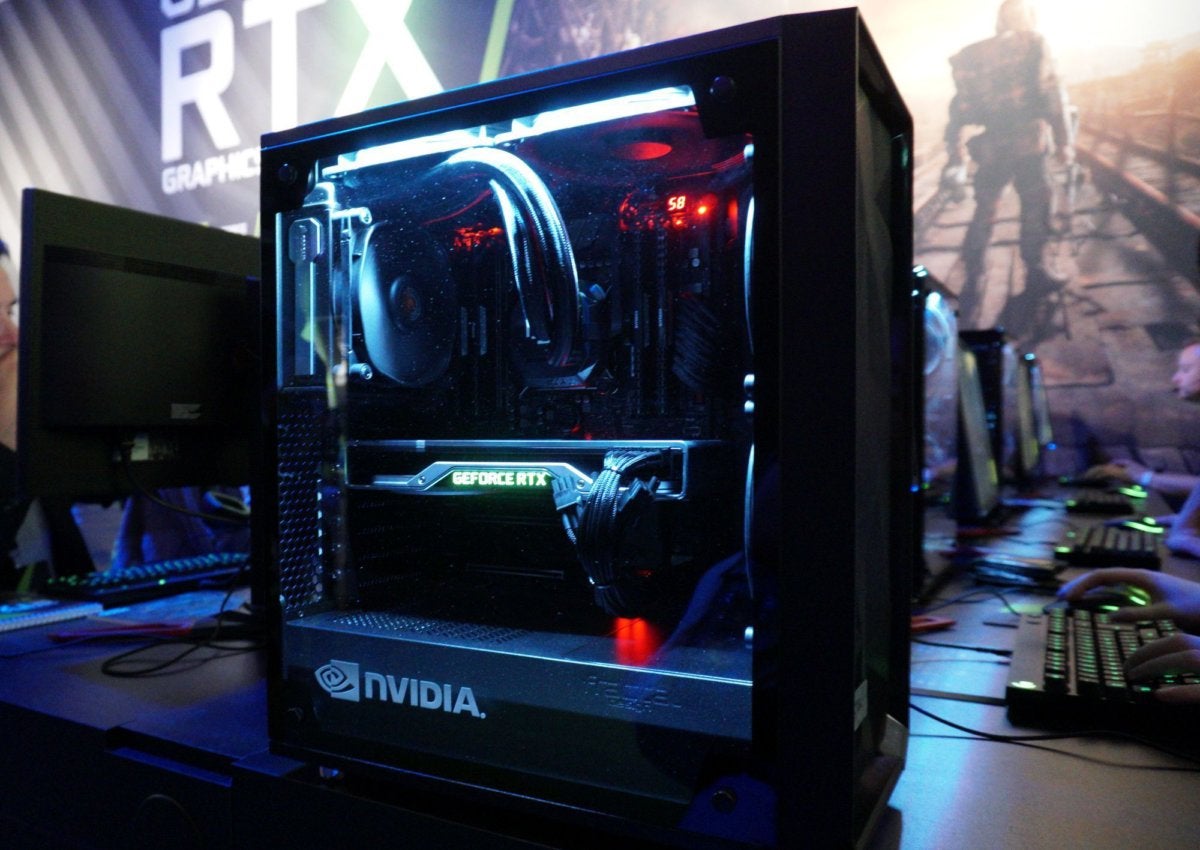 Your hot graphics card could cool down in a more spacious case.

Small form factor systems can deliver a big punch these days, but the constrained space can send hardware temperatures skyrocketing. If you have a particularly small case, and your graphics card keeps overheating and shutting down, consider upgrading to a more spacious model. Even larger cases can strangle airflow if they’re poorly designed, however. Our guide to picking the perfect PC case can help.

Finally, sometimes the thermal paste between the GPU and the heatsink can become dry and lose its effectiveness, most commonly in graphics cards that are many years old. And sometimes, graphics cards ship with poor thermal paste application, though it’s very rare. You could try to replace it if all else fails, though the process is highly technical, varies card-by-card, and voids the hell out of your warranty. Our guide to making your old graphics card run like new is several years old, but the basic technique still applies to today’s GPUs.

If you really wanted to get adventurous in your quest for lower temperatures, you could swap out your graphics card’s cooling system for a liquid-cooling option while you’ve got it disassembled, though it’s overkill for most people. We’ve got a guide to water-cooling your GPU, and hot-running enthusiasts with nothing to lose might find the upgrade worthwhile. “I saw significant reduction in heat and noise by going with liquid, and none of the throttling I saw on air cooling,” hardware editor Gordon Mah Ung wrote after using a Corsair bracket to attach a CPU closed-loop liquid cooler to a reference Radeon R9 290. “For a 20-minute project with a $35 bracket, that’s not bad.”

Just be sure to Google a disassembly guide for your specific graphics card model before you start tearing your precious, pricey hardware apart willy-nilly.