Nvidia’s $700 GeForce RTX 2080 Super is the second-fastest graphics card ever released, a screaming piece of kit that chews through games even at 4K resolution. You’d be very happy buying it. But it just doesn’t feel as, well, super as its lower-priced siblings.

The GeForce RTX 2060 Super and 2070 Super burst onto the scene early in July and changed the entire high-end graphics card landscape, rendering several other GPUs instantly obsolete. The $400 RTX 2060 Super delivered performance on par with the original $500 RTX 2070, while the new $500 RTX 2070 Super came within spitting distance of the original $700 RTX 2080. It wasn’t enough to kill AMD’s Radeon revival, but the first two Nvidia Super GPUs lived up to their name. 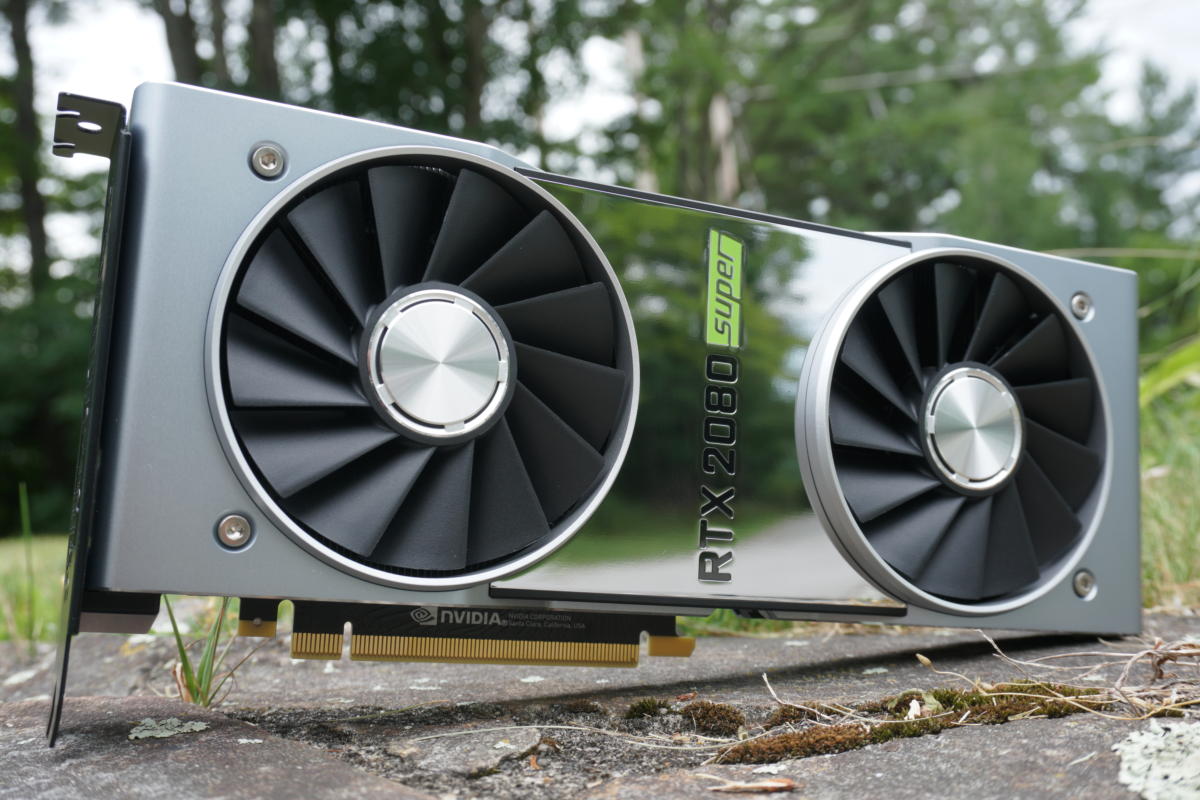 The GeForce RTX 2080 Super Founders Edition we’re testing today sticks to reference speeds and will set you back $699, Nvidia’s MSRP for this GPU. That’s in contrast to the original RTX 2080 FE, which commanded a $100 price premium over MSRP and included a mild overclock. Customized versions of the RTX 2080 Super will also be available today by Nvidia board partners like EVGA, Asus, and Gigabyte.

Speaking of reference specs, let’s look at the core GPU itself. Here’s how the GeForce RTX 2080 Super stacks up against the original RTX 2080 and the last-gen GTX 1080: 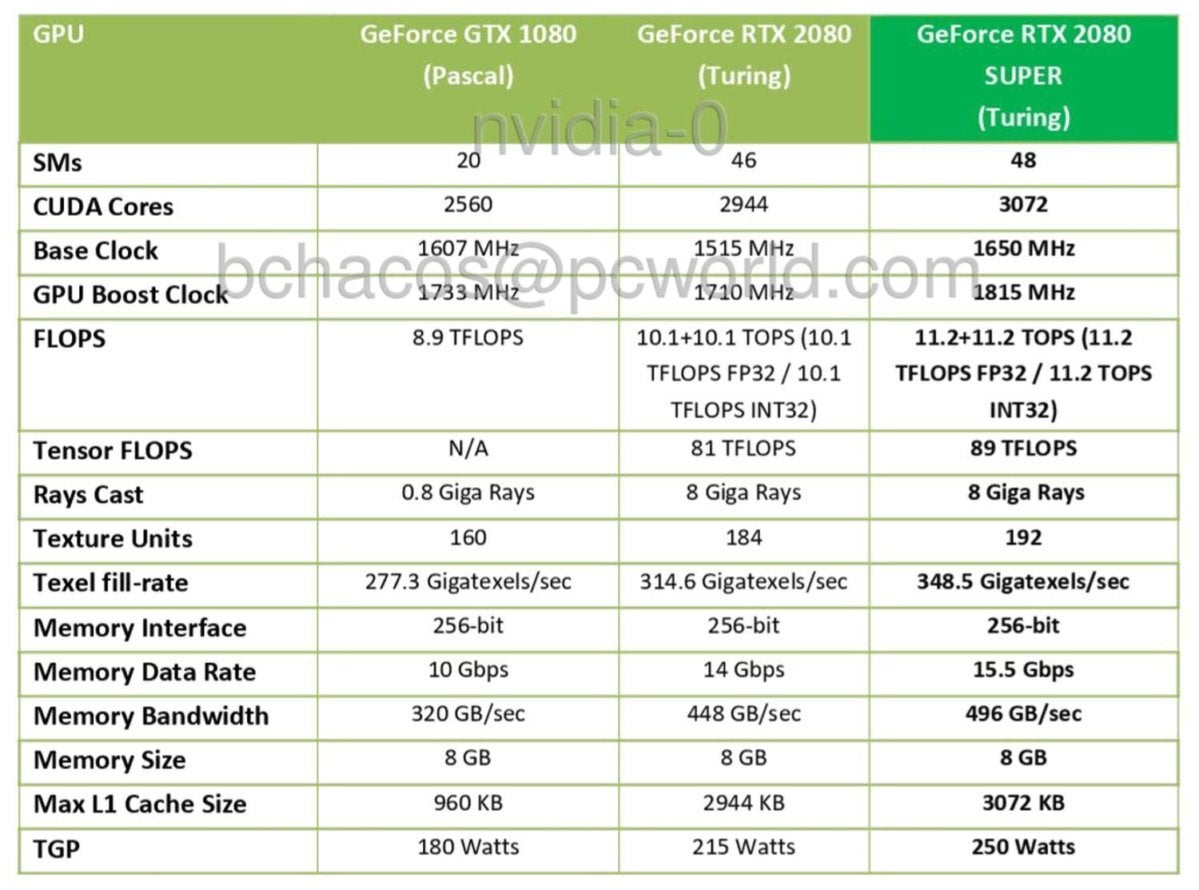 The GeForce RTX 2080 Super is in a slightly different situation than the other Super cards. While the RTX 2060 Super shifted to a more fully enabled version of the TU106 GPU to achieve its higher performance, and the RTX 2070 Super made the leap from TU106 to a cut-down version of the more potent TU104 GPU found in the original RTX 2080, that original RTX 2080 already deployed a mostly maxed-out version of TU104. Nvidia decided against shifting the 2080 Super up to a cut-down version of the mammoth TU102 GPU found in the RTX 2080 Ti. It’s instead using a full-fat version of TU104 with 48 streaming multiprocessors, up from 46 SMs in the original. For comparison, the RTX 2060 and 2070 Super models added four SMs each to achieve their large performance jumps.

Adding more cores isn’t the only tool in Nvidia’s arsenal. The GeForce RTX 2080 Super is the first consumer graphics card to ship with GDDR6 memory clocked at a speedy 15.5Gb/s instead of the standard 14Gbps. That boosts the overall memory bandwidth from the 448GB/s available in other GeForce RTX and Radeon RX 5700 GPUs all the way to 496GB/s, which can help boost performance in some scenarios. The company also increased clock speeds across the board with the RTX 2080 Super. 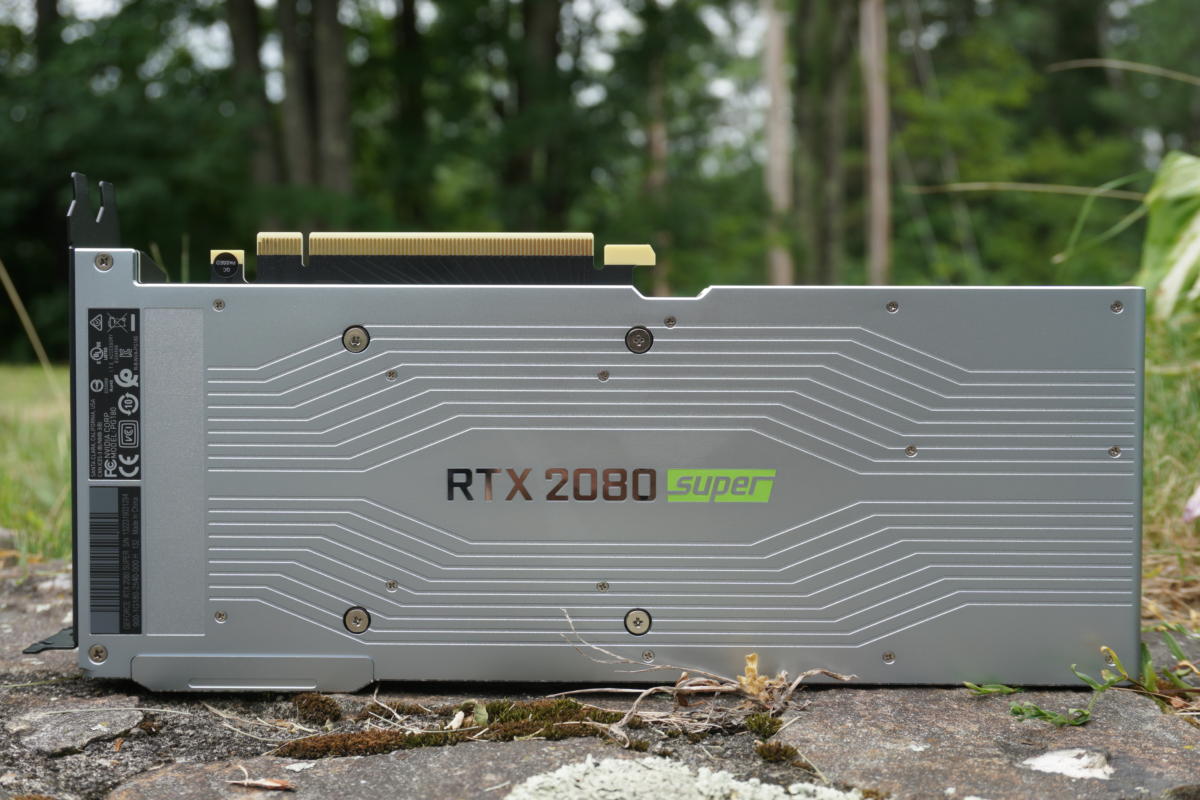 The GeForce RTX 2080 Super Founders Edition sticks to the same metal-clad cooler design as the original, though the area between its dual-axial fans have a mirror-polished instead of jet-black finish. It’s drop-dead gorgeous. The port layout remains the same as well, with three DisplayPorts and single HDMI and USB-C VirtualLink connections.

While the card needs the same 8-pin and 6-pin power connections as the original version, the power requirements have gone up to accommodate the extra oomph. Nvidia rates the RTX 2080 Super FE’s total board power at 250 watts, compared to the vanilla RTX 2080’s 215W. You can also run this card in a multi-GPU SLI setup.

Of course, the RTX 2080 Super comes loaded with tensor and RT cores dedicated to real-time ray tracing and AI-enhanced anti-aliasing, which you can learn all about in our Turing GPU deep-dive. To flex those muscles, Nvidia’s tossing in free copies of Wolfenstein: Youngblood and Remedy’s Control with every RTX 20-series purchase, for a limited time. Both games take advantage of those cutting-edge technologies, and after a slow start, ray tracing is finally gaining traction. 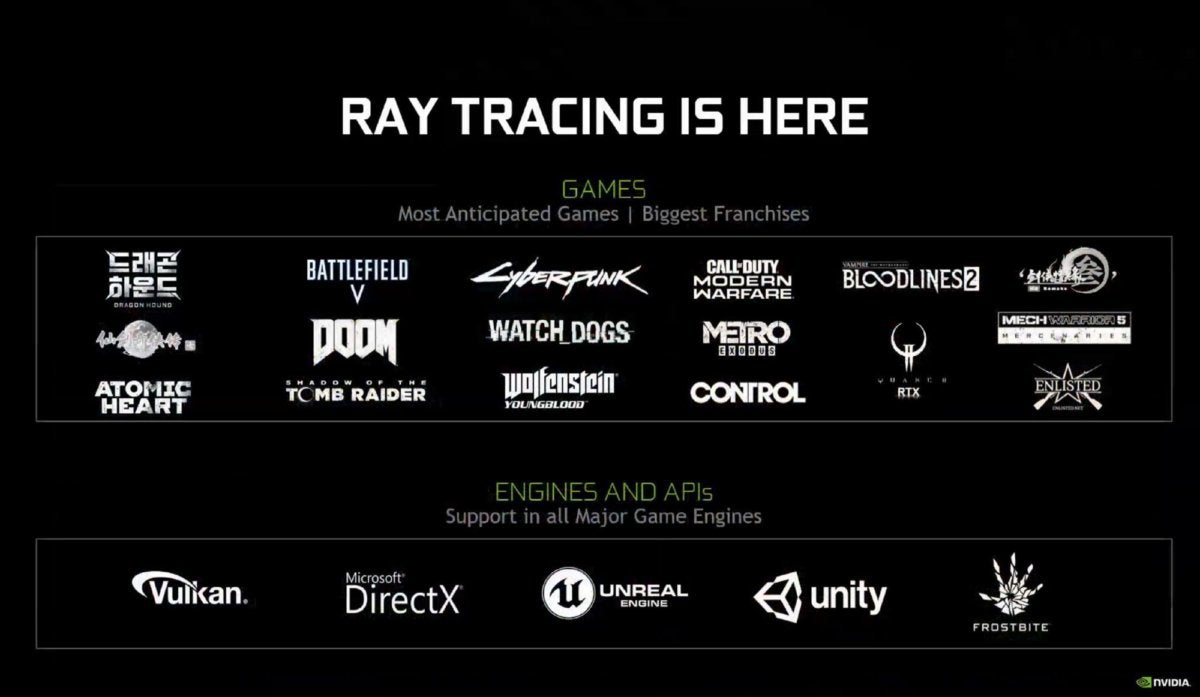 Metro Exodus is the current gold standard, with ray tracing substantially changing the look and feel of the game, but Shadow of the Tomb Raider, Battlefield V, Assetto Corsa, and Quake II RTX also support the technology. Ray tracing got a huge vote of confidence at E3 2019 as well, with Cyberpunk 2077, Call Of Duty: Modern Warfare, Doom Eternal, Wolfenstein: Youngblood, Vampire: The Masquerade—Bloodlines 2, Remedy’s Control, and Watch Dogs: Legion confirmed to include the technology. Most of those cracked our favorite games of E3 2019.

Several smaller titles also plan to bake in real-time ray tracing now that all the major game engines support it. Ray tracing is still niche, but it’s truly revolutionary and picking up speed with the arrival of hardware capable of running the ultra-intensive tasks.

That’s everything you need to know about the GeForce RTX 2080 Super Founders Edition. On to the test bench!