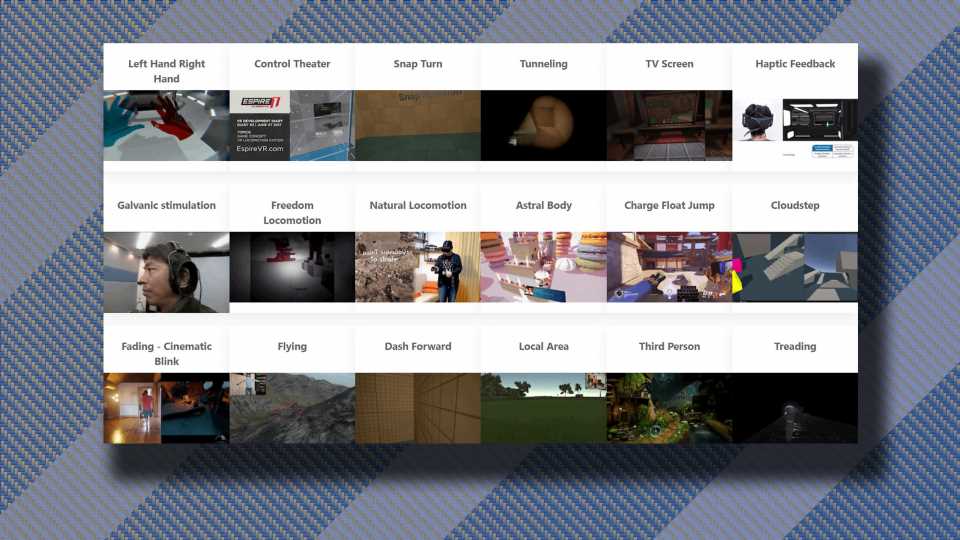 Locomotion is one of the most fundamental elements of any VR experience because it directly influences the sort of experience the user can have and how comfortable the experience can be. Since the inception of the medium, academics and developers have created a staggering number of ways to move around in VR, all with their pros and cons. The Locomotion Vault is a research project which catalogs more than 100 locomotion techniques to help the field codify the space and identify gaps for innovation.

Researchers Massimiliano Di Luca (University of Birmingham), Simon Egan (University of Washington), Hasti Seif (University of Copenhagen), and Mar Gonzalez-Franco (Microsoft Research) created the Locomotion Vault, an interactive database which catalogs 109 VR movement techniques and categorizes them with a range of attributes, like Posture, Speed, Multitasking, Energy Required, Embodiment, and more. The Locomotion Vault welcomes the submission of new techniques to the database, which can be done through the ‘Enter a New Technique’ button at the top of the website.

The attributes, which are also used to compare the similarity of different methods, come from an overview of VR locomotion literature, which the researchers detailed in their paper. The paper also digs into the method for calculating similarity, with the researchers noting that an automated approach was chosen so that the database could scale easily over time. The researchers say their goal in creating the Locomotion Database is to document a wide range of VR locomotion methods while making them easy to explore and to identify gaps in the current methods which could present opportunities for new methods to emerge.

“In the hands of researchers and practitioners, the tool can further grow the field of
locomotion, support the discovery and creation of new locomotion methods, and help researchers cope with the large set of attributes and techniques in an area in constant innovation, and eventually create new techniques that address the grand challenges in VR locomotion in the years to come,” the researchers conclude.

Naturally we’ve also spent a lot of time thinking about VR locomotion here at Road to VR. We recently shared a glossary of VR comfort settings to help developers communicate with customers about what kind of locomotion and comfort options their games include.