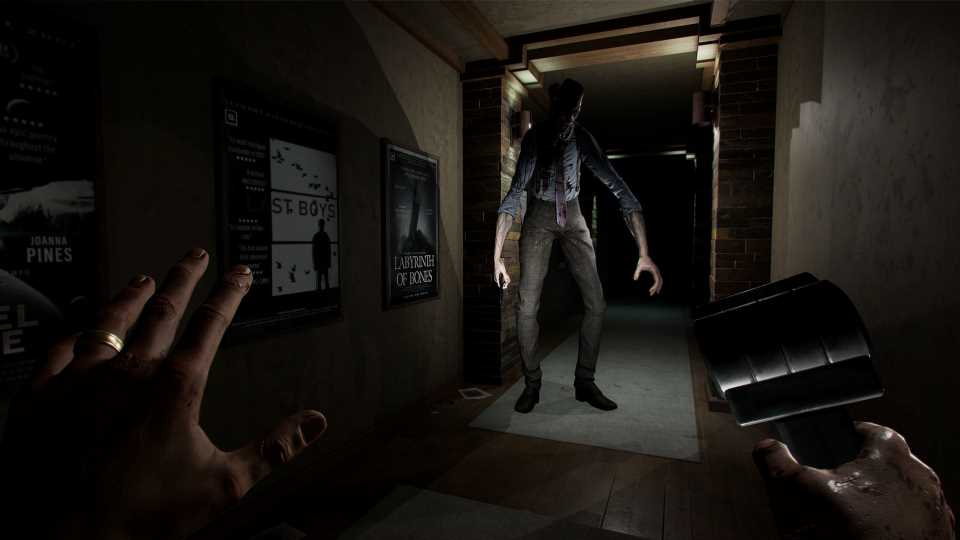 Wraith: The Oblivion – Afterlife, the first VR game in the storied ‘World of Darkness’ franchise, is set to launch next month on Quest and Rift, with versions for SteamVR headsets and PSVR coming later this year. We got a chance to go hands-on with a preview version on Quest 2, which takes you through the first 20 percent of the game.

Note: Wraith: The Oblivion – Afterlife is set to launch on April 22nd on Oculus Quest and Rift, priced at $30 with cross-buy. The game will subsequently launch on SteamVR headsets on May 25th, and PSVR later in 2021.

In Wraith, you’re thrust into the world as a ghostly apparition who’s tasked with reliving the events of a strange night at an ailing billionaire’s house in the Hollywood Hills.

Once a fleshy photographer named Ed, you’re now the game’s namesake, a newly-minted wraith (aka ghost). The game is very much an adventure-style affair, which involves plenty of walking, clue-finding, light puzzle-solving, but also a fair bit of running from fellow ghosties. More on that below. Taking on the powers of a wraith, you experience the story through holographic flashes of events between characters, which reveal what happened that fateful night.

There was a seance and plenty of creepy Hollywood types floating about that evening, but as a newborn wraith your dark subconscious—called ‘The Shadow’—goads you into discovering how you slipped beyond the veil. The game’s story-telling trope is effective way of leaving definitive breadcrumbs throughout a decidedly circuitous route across the game’s sprawling mansion, which seems to have fallen apart to more or less the same extent as you have. It’s a disheveled, bloody place that consequently offers plenty of dark spots for nastybois to hide in.

Here’s the answer to one of the questions you’re bound to have: is it scary?

Yes, but not because of jump scares. Nasty spirits can hunt you down, but you’re given audio cues well in advance so you can hide in closets and arm yourself with an obligatory vodka bottle—not for defending yourself as a bludgeon, but for tossing far away to divert the evil specter’s attention. Believe me, I tried on several occasions to thwack a lanky ghost-dude in the face to no avail. The obvious comparison here is Alien: Isolation, although not all enemy ghosts are the hunter type. At least in my two-hour playthrough. I expect more and worse encounters to come, as it’s clear there’s an built-in expectation to hide—and hide often.

Adding to the creepiness factor, later in the preview I also got the power to walk through specific wall portals, which in itself is pretty intimidating. You can’t peer in cautiously like with a door that you can immediately shut if you decide you need a second to see what’s inside. You simply have to jump in and let the void take you to wherever the endpoint happens to be. I can see this getting really confusing, but in a way that will probably add to the creepy atmosphere rather than adds frustration. Who knows what’s waiting for you on the other side? Thankfully there’s plenty of save points around, which allow you to simply save before your inevitable death. You can also visit a so-called mind palace, a place where you can revisit all of the clues you picked up along with way. It feels like a better solution than a massive inventory that you always carry around.

The one to two-hour preview is said to constitute 15-20 percent of the game, which puts the final product somewhere around 6.5 – 13.5 hours in length. It took me about an hour and half to play, so that estimation doesn’t sound too far-fetched.

In the end, I really like what I’ve seen so far. Although I’m not indoctrinated in The World of Darkness lore, the game on its own seems to have struck a good balance between mystery and genuinely atmospheric horror, a la Alien: Isolation-style craziness. Since it’s not a finished product yet, it’s hard to comment on the graphical fidelity of the game, but suffice it to say on Quest 2 that it looks adequate enough, feeling a bit like a PC VR game tuned down only slightly.

It also comes with an array of comfort options, which is not a surprise coming from the well-seasoned VR pros over at Fast Travel Games, which also created Apex Construct (2018) and The Curious Tale of Stolen Pets (2019).

If you’re looking to see the game in action, the studio actually put together a pretty great video showing a fast-forward version of the game’s preview demo. Check it out the 10-minute video below to get a good idea of what awaits: